After an up-and-down road trip, the Miami Heat return home to face the Denver Nuggets, who have been in freefall without reigning MVP Nikola Jokic. Read our Nuggets vs. Heat picks and predictions to find out how you can take advantage of them.

Things have gone from bad to worse for the Denver Nuggets. Denver has lost six in a row straight up and against the spread, Nikola Jokic is still nursing a wrist injury and now it’s being reported Michael Porter Jr. is done for the season.

And it won’t get any easier when they visit one of the best teams in the Eastern Conference in the Miami Heat. Miami returns home after a four-game road trip, can they cover the 7.5-point chalk?

Find out in our free NBA picks and predictions for Nuggets vs. Heat on November 29.

The Heat opened this matchup as 7.5-point home favorites and that’s where the line sits as of Monday afternoon. The total hit the board at 207.5 and has been bet up slightly to 208.5. Use the live odds widget above to track any future line movements right until tip-off and be sure to check out the full NBA odds before betting to ensure you get the best number.

The Over is 4-0 in the Nuggets’ last four games without Jokic. Find more NBA betting trends for Nuggets vs. Heat.

Nuggets vs Heat picks and predictions

The Nuggets have been off since Friday, following a 120-109 loss to the Milwaukee Bucks, failing to cover as 6.5-point underdogs. It was Denver’s sixth consecutive loss straight up and against the spread. And it was the fourth straight game they played without MVP Nikola Jokic.

Jokic is still nursing his wrist injury, but if he is unable to go in this one, there is no way anyone should have any confidence backing this Nuggets team in its current state.

Averaging 26.4 points, 13.6 rebounds, and 6.4 assists, Jokic is obviously a huge loss on offense for the Nuggets, but his presence is almost felt as much at the other end of the floor. Denver has allowed opponents to shoot 52.2 percent from the floor over the last four games, which ranks dead last in the NBA over that stretch.

Meanwhile, Miami returns home after an up-and-down road trip where they went 2-2 SU and 1-3 ATS. But now the Heat are back in the comforts of home where they are 6-1 SU/ATS for the year.

The Heat also ranks fourth in the NBA in net rating at this point in the season and even with Jimmy Butler and Tyler Herro questionable, they have enough firepower to take down the spread in this one, particularly if Jokic is unable to go once again.

When it comes to the total, the Over has got to be the play here. For starters, the Over is 4-0 in Denver’s last four games without Jokic.

As noted, while Jokic’s production is missed on offense, his absence on defense is just as great. While he has the appearance of a slow, lumbering center at times, Jokic’s basketball IQ is through the roof. That combined with his quick feet and anticipation allow him to clog the inside while directing his teammates on the perimeter.

Without him, the Nuggets just look lost and as a result, the Nuggets have allowed 119.8 points per game over the last four games without Jokic.

And don’t be concerned that a Joker-less Nuggets team can’t do it’s part to send this game over against a Heat defense that ranks fourth the NBA in defensive rating. The Nuggets have averaged just 100.7 ppg over their last six games. The Over is 5-1 in that span.

For all the reasons just mentioned, the Over is the best bet in this matchup. The Nuggets continue to give opposing teams open looks with Jokic and that won’t bode well against a Heat team that ranks sixth in the NBA in true shooting percentage and ninth in effective field goal percentage.

And while the Heat’s scoring was down on their past road trip, they average 111.3 points per game at home. Bet the Over with relative confidence in this one. And if Butler ends up playing, this could be a lock.

Did you know that if you parlayed today’s NBA Nuggets vs. Heat predictions and picks in a single-game parlay, you could win $26.45 on a $10 bet? 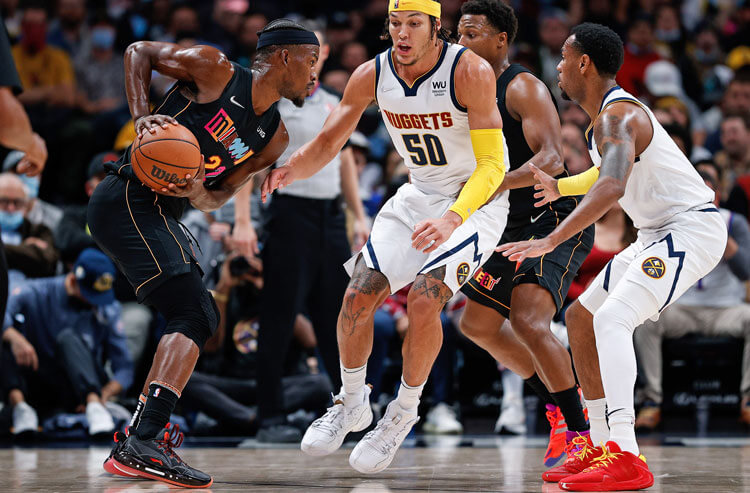 Nuggets vs Heat Picks and Predictions: Miami Too Much For Nuggets
Provided by