Nuggets vs Clippers Picks and Predictions: Jokic Too Much for Depleted Clips

The Clippers' stars are sitting (...again) and Denver's inching itself closer to full health. Our NBA picks examine if a depleted L.A. squad can keep up with Nikola Jokic & Co. tonight (spoiler alert: probably not).

A depleted Los Angeles Clippers roster continues to battle on without injured superstars Kawhi Leonard and Paul George — and a visit from the Denver Nuggets tonight will be another early-season test.

The Clippers (11-8) lost 124-107 to the Golden State Warriors last time out, snapping their three-game win streak. Despite impressive depth, L.A. is hard-pressed to compete with top-tier opponents without its top two scorers, and there’s still no timetable for their return.

Meanwhile, injury woes are easing for the Nuggets (11-7), who outlasted the Oklahoma City Thunder on Wednesday for a 131-126 overtime victory, with Nikola Jokic exploding for 39 points. The Denver roster should be even closer to full strength tonight.

Learn more in our free Nuggets vs Clippers NBA picks and predictions ahead of this Friday, November 25 showdown.

Nuggets vs Clippers picks and predictions

Denver has weathered a rough little patch without Jokic and Jamal Murray, and I see the Nuggets ending November on a winning run. Tonight’s matchup feels like one where the visitors can ride their offense to a victory, with their top four scorers expected to be available.

Jokic is an offensive cheat code all by himself, and there’s a chance that he’ll be surrounded by both Murray and Michael Porter Jr. here after the pair sat out in OKC for conditioning and rest. Bench sparkplug Bones Hyland could also be back after an illness.

I don’t trust a Clippers starting line-up short on lockdown defenders to have the discipline needed to slow down a Jokic-led halfcourt offense. The Serbian has torched this defense in prior meetings, including their 2020 playoff series in the bubble, and Denver has won eight of the last 10 meetings.

Ivica Zubac has the strength to battle Jokic on the boards, but look for regular double-teams when the two-time reigning MVP has the ball in the post. Ty Lue will have different schemes up his sleeve, but Jokic has seen it all at this point and has an answer for everything.

Given the Clippers’ key absences, this line is surprisingly short — and I like the Nuggets to pull away in the second half for a comfortable win.

The line could easily be a few points higher for tonight’s matchup. Assuming Denver’s list of “probable” players are all available, the visitors should be able to score freely — and then there’s the Jokic factor. Averaging 22.7 points, 9.5 rebounds, and 9 assists this season, he stands out as the clear All-NBA difference-maker here.

The Nuggets have traveled well this season (7-5 on the road) and had an off day in L.A. to prepare for the Clippers. Look for a high-energy performance from Michael Malone’s men, with Porter Jr. returning to continue his hot shooting from 3-point range (almost 43% this year).

Give the Clippers a ton of credit for their resilience in grinding out wins without Leonard and George (and with the disruption of a re-jigged rotation), but keep in mind that their mini-revival came against the Houston Rockets, San Antonio Spurs, and Detroit Pistons. Tonight’s matchup is a big step up in quality against a team they could well see in the playoffs in April and May.

For the Clippers, the injuries to Leonard and George hamper their scoring and defense, so it’s tough to evaluate the impact on the Over/Under. In their absence, Reggie Jackson, Norman Powell, and Marcus Morris Jr. will get extra touches — and that’s not always a positive.

The Under is 4-0 in the Nuggets’ last four games following an ATS win, and 4-1 in their last five games this season. It’s also 8-2 in L.A.’s last 10 home games. With significant absences and some Denver players feeling their way back after injuries or illness, this contest could take a while to get going.

If Murray plays, his two-man game with Jokic — one of the best combos in the league — could yet swing this matchup closer to the Over, but it’s hard to predict what type of outing we’ll see from an LA offense still searching for an interim identity without its two focal points.

The Nuggets are at their best when going toe-to-toe with fellow playoff contenders — and they’re 5-1 ATS in their last six games against a team with a winning percentage over .600. Find more NBA betting trends for Nuggets vs. Clippers. 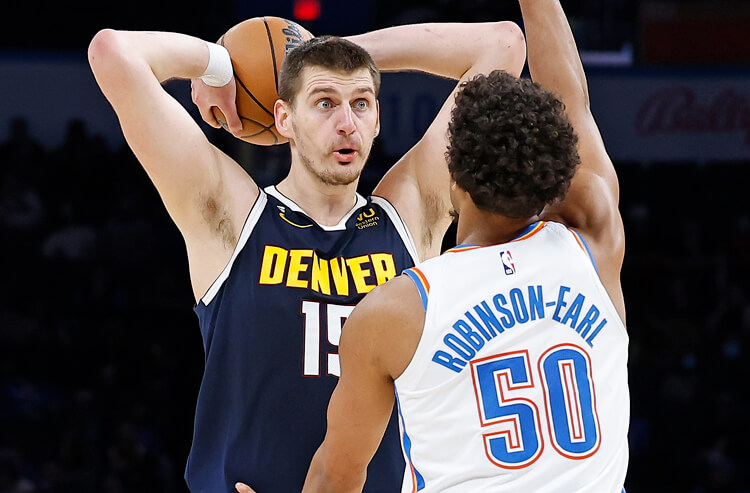 Nuggets vs Clippers Picks and Predictions: Jokic Too Much for Depleted Clips
Provided by