Mavericks vs Warriors Game 1 Picks and Predictions: Dallas Should Cover as Road Dog

For the first time since 2011, the Dallas Mavericks are back in the Western Conference Finals. We like Luka Doncic and the Mavs to cover the 5-point spread as Game 1 dogs on Wednesday. Find out more in our Mavericks vs. Warriors betting picks. 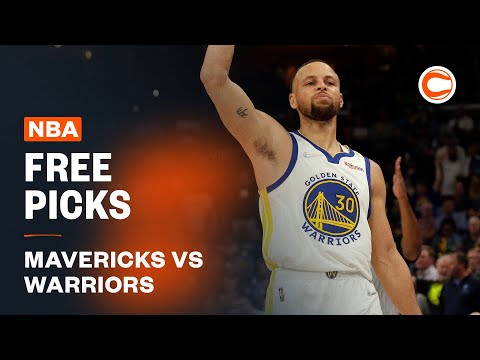 The Dallas Mavericks may be notable underdogs against the Golden State Warriors in the Western Conference finals, but they’ll always have a fighting chance with the best player on the planet donning the blue and silver each night.

Dallas, pegged at +185 on the series price, is leaning heavily on Luka Doncic to keep the upsets coming after the dynamic guard averaged 32.6 points in the team’s series win over the top-seeded Phoenix Suns in the conference semis. Doncic and the Mavs are getting 5.5 points on the road in Game 1 of the West finals Wednesday.

Here are our free NBA picks and predictions for Mavericks at Warriors on May 18.

Golden State opened as a 5-point favorite at home for Game 1 and early action on the Dubs pushed that spread to -5.5 before buyback on Dallas slimmed it to as low as +4.5 at some shops. As for the total, this number hit the board at 214.5 and got steamed up as high as 216 points before money on the Under sunk the total back to 214.5 as of Tuesday afternoon.

The Under is 47-23 in Mavericks’ last 70 games as underdogs. Find more NBA betting trends for Mavericks vs. Warriors.

The Warriors have a slight edge in rest after wrapping their series with Memphis in six games, having last played Friday. Dallas needed seven games to get by Phoenix and while the Mavericks don’t get that extended break, they do get an added day of grace between series thanks to the schedule makers (Boston did not).

To be honest, Dallas shouldn’t want a longer break. Momentum was such a huge factor for the Mavericks in the conference semifinals, winning four of five after losing the first two games on the road. Dallas was especially hot in the closing two games of the series with the Suns, boasting a collective offensive rating of 126.2 in those contests while locking down Phoenix to a combined 176 points on 39% shooting.

Doncic did the bulk of the damage, posting efforts of 33 and 35 points in those outings but the rest of the Mavericks also came through, shooting 51% from the field including a 27-for-59 count from beyond the arc in Games 6 and 7.

The Warriors’ defense hasn’t wasted energy trying to shut down their opponents’ top talent in the playoffs, instead aiming at the support staff and limiting those role players – putting all the weight on the superstars’ shoulders.

Doncic is capable of carrying the Mavs pretty far on his own, but as we saw in the series with the Suns, he gassed out in the first two games and Dallas really didn’t start clicking until the others got involved. If guys like Jalen Brunson, Spencer Dinwiddie, and Reggie Bullock can rise to the challenge again, Game 1 will be a tighter contest than oddsmakers expect.

The Mavs did win three of the four matchups with the Warriors in the regular season, but Golden State didn’t have its Hall of Fame-bound “Big 3” in any of those outings. Leaning on those past results is a bit incomplete, but with the way Doncic is playing and the Mavericks' methodical pace feeding a lockdown defense, I’m grabbing the points with a 23-year-old who is already one of the greatest postseason performers in NBA history.

Neither team wants this series to turn into a wild west shootout, even with all the 3-point threats on the floor.

For all the history behind Golden State’s stretch offense in postseasons past, Steve Kerr is still a defense-first head coach and will aggressively switch on screens and keep his players' heels above the 3-point arc, protecting against Dallas’ dangerous shooters.

The Warriors have some versatile defenders who could give the Mavs fits and will throw Andrew Wiggins at Doncic, trying to utilize his size and quickness to keep a hand in Luka’s face. Draymond Green and Jordan Poole will also be counted on to throw a wrench in the Mavs’ plans and getting Otto Porter back from injury is another two-way piece to pad the Dubs’ depth.

Dallas’ defense has been superb all season, fueled by a patient offensive approach that runs a postseason pace of just 92.5, chews up the shot clock, and limits the number of touches foes get with the basketball. The Mavericks also switch heavy on defense and take away the long-range looks, limiting playoff foes to less than 34% success from distance.

In past matchups with the Warriors, Dallas head coach Jason Kidd has picked on Stephen Curry and tried to take him out of the equation with early pressure pick-ups and aggressive double teams. The Warriors obviously have other scoring options, but Curry’s playmaking is just as important as his 3-point threat, averaging almost six assists per game versus Memphis.

Turnovers continue to be an issue for the Warriors, who coughed up the ball more than 18 times per game in the series with the Grizzlies. Memphis’ motor took those turnovers the other way and quickly translated them into fast-break points. The Mavs, on the other hand, pick up less than nine points in fast-break buckets and break out in transition on just 13.6% of possessions. Dallas will gladly take those turnovers but milk every extra second of possession it can from those miscues.

These teams split Over/Under results in their four meetings this year but have produced plenty of Under winners in their recent playoff performances. That abrupt total move up to 216 points could have been market manipulation from early sharp bettors trying to get a better number on their Under. We’re also expecting a slower-paced, low-scoring series opener as both sides feel out the matchups.

The Warriors are one of the most active offenses in the NBA and can find different ways to score. While knocking down shots from long range has been the Dubs’ calling card, this version of Golden State has been especially good at moving without the basketball and finding cutters for easy buckets.

Entering the Western finals, Golden State boasts an assist percentage of 66.4 – the highest among all qualifying postseason teams. That busy motion away from the basketball is something Dallas’ didn’t have to worry about much in their series with Utah and Phoenix.

Dallas has done a good job nullifying Curry’s scoring in past meetings, checking him to point totals of 14, 18, 21, and 27 in their four matchups. But, as mentioned, Curry has made up for that with his playmaking, averaging close to eight assists over those contests with totals of seven, nine, and 10 dimes in the last three games versus the Mavericks.

Curry dished out almost six assists per game versus the Grizzlies and leads the team with 5.6 dimes per outing in the postseason. Dallas doesn't have a rim protector quite like like Memphis defender Jaren Jackson Jr., so the lane will be clean for Curry to connect with cutters.

His assist prop total for Game 1 is sitting at 5.5, which should be easy to top if the Mavs forced Steph to more a passing role again.

Did you know that if you parlayed today’s NBA Mavericks vs. Warriors predictions and picks in a single-game parlay, you could win $58.70 on a $10 bet?

Mavericks vs Warriors Game 1 Picks and Predictions: Dallas Should Cover as Road Dog
Provided by