It's been a long and grueling season, but we are now left with two of the East's best battling it out for a spot in the finals. Who will get the advantage in Game 1? Find out in our NBA betting picks and predictions for Celtics vs. Heat. 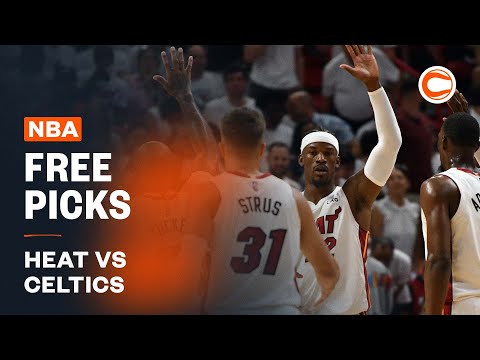 The Miami Heat own home-court advantage in the Eastern Conference finals and are point spread favorites hosting the Boston Celtics in Game 1 of this series Tuesday night. Yet… Boston is priced at -180 to win the series with Miami coming back at +150.

A big influence on those contradicting markets is the fact the Celtics are coming off a grueling seven-game set with the Milwaukee Bucks, putting just one day off between Sunday’s Game 7 victory and this opener in South Beach.

Somewhere along the line, oddsmakers expect Boston to steal a game on the road. Will it be Game 1? Here are our free NBA betting picks and predictions for Celtics at Heat on May 17.

Be sure to also check out our favorite player prop picks for Game 1.

Following the Celtics’ impressive win over Milwaukee in Game 7 of their conference semifinal series Sunday, bookmakers opened Boston between +1.5 and +2.5 for Game 1 in Miami. The market leveled out at +2 with some shops floating Heat -1.5 as of Monday afternoon. The total hit the board at 206.5 points and quickly shrunk to as low as 204.

The Heat are 8-1 ATS in their last nine home games. Find more NBA betting trends for Celtics vs. Heat.

What was being sold as an all-time Game 7 showdown provided very little pop, with Boston crushing Milwaukee 109-81 in Sunday’s deciding contest. But while that finale was a bit of a cakewalk, the tax of that lengthy series and the physicality of those battles with the Bucks will carry over into Game 1 of the Eastern Conference finals.

The Celtics have just one day off to rest, prepare, and travel to Miami to face a Heat team that has been waiting since Thursday night to see who its conference final foe would be. In the meantime, head coach Erik Spoelstra would have been boning up on both the Celtics and Bucks, giving the Heat a head start on game planning and adjustments.

One of the notable aspects Miami brings to the table that Milwaukee did not is depth. The Heat are getting an average of 34.7 points per game off the bench, with instant impact players like Tyler Herro and Victor Oladipo maintaining Miami’s offensive output even when the starters take a seat.

That depth overwhelmed the Sixers last round and could do the same to a weary Boston roster Wednesday, with the Celtics pulling an average of only 12 minutes per game off the pine for just under 22 points per game in the conference semis.

With that extra battery life, the Heat can match the Celtics’ defensive intensity and roll out a very similar lineup in terms of size and function. Miami — much like Boston — doesn’t run that big under the basket with versatile center Bam Adebayo able to bang down low or play around the paint, as well as defend pretty much any position.

While I’m not putting too much weight into past matchups, the most recent game between these franchises saw Miami check the Celtics to just 41% shooting and force 17 turnovers in a 106-98 victory in the Garden on March 30. On top of the Heat’s smothering defense, heavy legs and fatigue could lead to similar stats from the Celtics on Wednesday.

Bookies may be predicting Boston to steal one on the road in this series, but it won’t be Game 1.

Boston’s defense capitalized on a fatal flaw for the Bucks in the conference semifinals. With Middleton out and George Hill playing hurt, Milwaukee really lacked scoring depth — especially from beyond the arc.

The Bucks shot an ice-cold 28% from distance and that allowed the Celtics to pack the paint to protect against Giannis Antetokounmpo without much worry of Milwaukee’s shooters. Giannis still shot 45.5% for the series but the rest of the team was a dismal 39% from the floor.

The Heat are a completely different animal. Miami is the top 3-point shooting offense in the NBA, owning an overall 37.3% success rate from downtown on the season. It fell into a weird home/away 3-point shooting split vs. Philadelphia but got right towards the end of that series, making 13 of 33 from deep in Game 6.

In the regular season, both Miami and Boston ranked among the more methodical paces in the NBA (24th and 28th) and their three head-to-head meetings produced a low pace rating of 96.33, with two of those three games staying below the total.

However, those totals ranged from 213.5 to 209.5 points — still high considering the Game 1 Over/Under is slipping to 204 points. That current number would make it the shortest total of the entire NBA Playoffs if it closes there.

Miami’s shooting and scoring depth will be enough to challenge that short total, even more so when you add in the lumbering legs of a gassed Celtics' defense.

As much as we’re timid about backing Boston given the quick turnaround and a tenderized lineup off an extremely physical series with Milwaukee, we respect the Celtics’ two-way play and Jayson Tatum’s ability to put this team on his back.

Sometimes sitting stagnant — even for a few days — can be a disadvantage if your opponent is already in that do-or-die mindset, which Boston is obviously in.

This spread has already slimmed as much as a point at some shops, which means books are bracing for a bold effort from Boston. I don’t see it being a blowout, like recent postseason play, so we’ll keep it simple and back the Heat at home on the discounted moneyline.

Did you know that if you parlayed today’s NBA Celtics vs. Heat predictions and picks in a single-game parlay, you could win $55.60 on a $10 bet?