Mavericks vs Lakers Picks and Predictions for December 25

It wouldn’t be Christmas Day in the NBA without LeBron James. The King makes his 13th consecutive Christmas appearance as the Los Angeles Lakers host the Dallas Mavericks and the kid looking to take his crown – Luka Doncic.

So, let's thank the oddsmakers for the gift of Christmas Day NBA lines, where the Mavericks have been given a stocking full of 6.5 points courtesy of the Lakers.

We break down the NBA odds with our free Mavericks vs. Lakers picks and predictions for Friday, December 25, with tipoff scheduled for 10:00 p.m. ET.

The Under is 8-2 in the last 10 meetings between the Mavericks and Lakers, and 5-0 in the last five meetings at the Staples Center. Find more NBA betting trends for Mavericks vs. Lakers.

The Lakers got off to a predictably slow start in their opener against the Clippers. Teams dealing with the emotions of a ring ceremony rarely come out firing, and that was the case Tuesday in an eventual 116-109 loss.

James put in a half-hearted performance (by his standards) in that game, going 7-17 from the floor for 22 points, adding five rebounds and five assists, and then rolling his ankle with about seven minutes to go, ending his night. But James said he is good to go for Friday’s game against the Mavs, a matchup the Lakers fared very well in last season.

The Lakers and Mavericks met four times in 2019-20 with the Lakers going 3-1 SU/ATS. In the three wins, L.A. won by an average of 12.3 points per contest with LeBron averaging a triple-double over those four games.

Speaking of triple-doubles, the only person to have more triple-doubles than Luka Doncic’s 25 over the last two seasons is Russell Westbrook. The Mavs weren’t/were able to pull out the win over the new-look Suns in their opener, and Doncic will need more support if they want to upset the Lakers. Kristaps Porzingis will be out for a few more weeks, so Tim Hardaway Jr. and Josh Richardson will have to pick up the slack.

Even if someone steps up, it’s hard to see the Mavs being able to keep up with LeBron, Anthony Davis and the rest of the Lakers’ depth. And it’s even harder to see LeBron putting up two lackluster performances in a row. We’re in the giving mood this Christmas so we’re laying the points.

The Mavericks led the NBA in offensive rating last season, but they got off to a slow start Wednesday night. The Mavs shot less than 30 percent from 3-point range against the Suns, including an oh-fer from Doncic from deep.

Simply put, without Porzingis to support him, the Mavs struggled because Doncic struggled. Now, they’ll go against a Lakers team that ranked third in defensive rating last season. Additionally, last season’s four games between these two saw an average of 222.3 points per game and one of those games went into overtime. This one should stay below the number.

Watching LeBron James work his magic on Christmas Day is the gift that keeps on giving. James has averaged 25.7 points, 8.1 rebounds and 6.3 assists during 14 appearances on Christmas Day throughout his NBA career. And the bow on this gift is that LeBron averaged 28 points, 10.8 rebounds and 11 assists in four games against the Mavs last season. This means we’re taking LeBron to go Over his Points + Rebounds + Assists prop in this matchup. Merry Christmas! 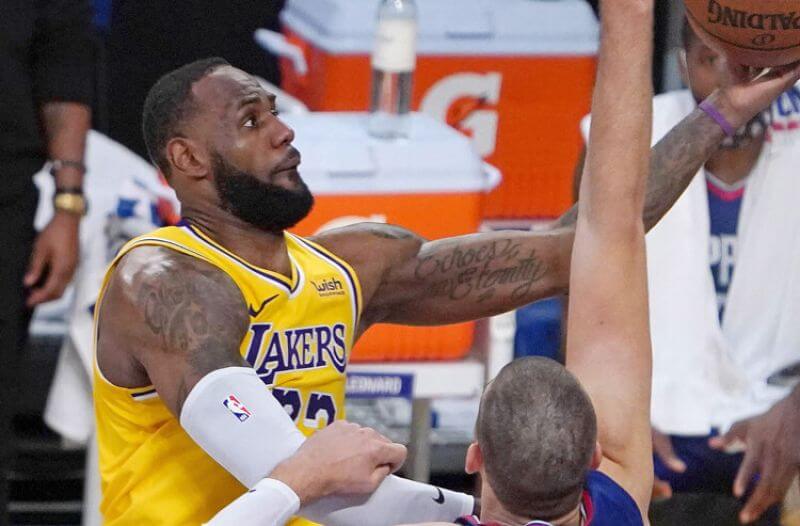 Mavericks vs Lakers Picks and Predictions for December 25
Provided by