The battle of New York is taking center stage Sunday afternoon without Kyrie Irving, but even so, the helpless Knicks won't have answers for Kevin Durant and the rest of the Nets' supporting cast — as our NBA betting picks explain.

All off-court drama aside, the rivalry in the Big Apple should lean in one direction these days.

If the Nets can hold serve, they can hold onto the honor of playing in the higher play-in game in the East. The fact that the Knicks can play spoiler to that unglamorous reality adds some allure to this afternoon’s matinee.

Here are our free NBA picks and predictions for the Knicks at the Nets on March 13, with tip set for 1:00 ET.

The Brooklyn borough home team opened as 5.5-point favorites Saturday afternoon, and during Sunday’s earliest hours, the Nets bumped up to 6-point favorites. The total hit the boards at 224.5.

The Nets have beaten the spread in their last two games, the latter half of Kevin Durant’s return to the court and the first games in which he did not take 20-plus shots. Find more NBA betting trends for Knicks vs. Nets.

Knicks vs Nets picks and predictions

This is a bet on Kevin Durant. There is no need to beat around the bush, especially not with an early Sunday tip.

The lethal wing has scored 26.75 points per game in his four games back from injury, and this matinee begs one question: Who among the Knicks can stop Durant?

Aside from Mitchell Robinson, no individual Knick has put together a decent defensive rating in the last six weeks. As impressive as Robinson has been, both this season and in years past, he is too post-focused to defend Durant. That leaves … uhhh … hmmm … Julius Randle? RJ Barrett? Taj Gibson?

They have all been defensive liabilities this season. In other words, this may represent Durant’s ideal get-right opponent.

He has scored a bit in the last week, but he has yet to truly find his groove. There is no one in the Manhattan borough that can be counted on to slow down the Slim Reaper.

Citing naptime feels like a childish handicap, but it is the reality in the NBA. NBA players base nearly their entire schedules around a mid-afternoon nap. Nationally-broadcast rivalries like this interrupt those naps.

And thus, most such mid-afternoon tips include some sluggish performances. While the expectation may be that Kevin Durant capitalizes on that opportunity, the rest of the Nets have shown a propensity for lackadaisical production.

Seth Curry has been shooting both well and often — a 61.8 true-shooting percentage since Feb. 1 on 12.4 shots per game — but no other Net has exceeded eight shots per game while managing a 54% true-shooting rate or better that will be available today. (Apologies to LaMarcus Aldrige and Kyrie Irving.)

That scatter-shot reality should be only enhanced by this widely-viewed tip. Scoff as you will, but naptime is important in a season that is often described as “a series of three-hour naps.”

If any player should not be back into the swing of a mid-afternoon nap, it is Durant. He has been back on the court for only four games, but he has hit 52.8% of his shots and 40% of his attempts from beyond the arc.

Afternoons can be spent in worse ways than committing to Durant’s reliability, especially against a middle-of-the-pack defense like the Knicks. Julius Randle may flash every few weeks or so this season, but at no point has that included defensive excellence.

With or without Kyrie Irving — and at home, that remains without — Durant should be too much for the Knicks to keep up with.

Did you know that if you parlayed today’s NBA Knicks vs. Nets predictions and picks in a single-game parlay, you could win $26.45 on a $10 bet? 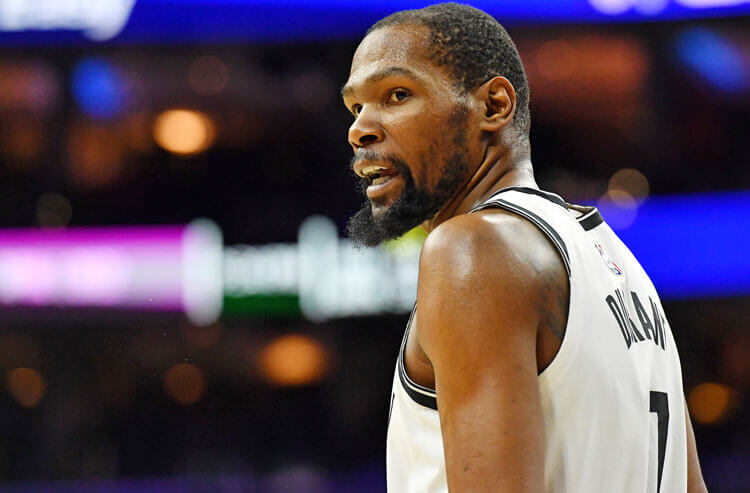