The Suns enter the Western Conference finals fresh off a sweep but they haven't played in a week and will be missing Chris Paul. Can the Kawhi-less Clippers take advantage and cover as road underdogs in Game 1? Find out in our Clippers vs. Suns picks.

The Western Conference finals between the Los Angeles Clippers and Phoenix Suns is missing a little flavor, like popcorn without the butter or pizza without the pineapple (yeah, I said it!), when Game 1 tips off Sunday afternoon.

Both teams are without their captains, with L.A. forward Kawhi Leonard down with a knee injury and Phoenix veteran guard Chris Paul in COVID-19 protocols. That has the NBA betting odds rolling out the Suns as 4-point home chalk for the series opener, coming off an impressive series sweep of Denver in the conference semifinals.

Here are free picks and predictions for Clippers vs. Suns on June 20.

TwinSpires Sportsbook pegged the Suns as 4-point favorites on the opening line, initially moved to -4.5, then dropped to -3.5 this morning. As of 1 p.m. ET, the Suns are back at the -4 opener, while the Clippers are attracting 62 percent of bets and 65 percent of money. "The Clippers are a trendy 'dog today. The Suns covering would be a good result for us," TwinSpires trading analyst Zachary Lucas said. The total is down a point to 220.5, with the Under taking 71 percent of bets/58 percent of cash.

The Over is 20-8 in the Suns’ last 28 games as favorites. Find more NBA betting trends for Clippers vs. Suns.

The impact of losing guys like Leonard and Paul has major trickle-down effects, but the Clippers appear better equipped than the Suns to bridge that gap in the playbook. Hell, Los Angeles has been managing with and without Kawhi all season.

The depth of the Clippers’ roster was in full display in the series win over Utah. With Leonard sidelined, not only did Paul George answer the call while simultaneously stuffing a basketball down the throat of doubters — averaging almost 32 points through the Clips’ four straight wins — but he only had to score that much. George didn’t have to go mega-ton on the offensive end and push to make up for all the missing points with Leonard lost, because L.A.’s role players and reserves stepped up to take down the Jazz.

Spectacled point guard Reggie Jackson poured in 49 total points in Games 5 and 6. Reserve SG Terance Mann chipped in with 52 points in those games, including 39 in Game 6. And versatile forward Nicolas Batum was solid on both ends of the floor, with 25 points, 14 rebounds, six steals, and three blocks in the final two contests of the series.

That’s not to say the Suns don’t have capable backups and players who can step up and fill Paul’s shoes as well. But this team has been sitting around since June 13 and its seven-game postseason winning streak, which stretches three games into the conference quarters, has been on ice for a week. Phoenix was at its best when Paul was healthy and logging major minutes versus the Nuggets. Without him, this just isn’t the same team.

As for the road side in Game 1, there’s a sense of urgency and intensity oozing from this Los Angeles squad as it enters the Western Conference finals. Not only is L.A. trying to keep the Clippers in the series until Leonard can return but it needs to make the most of it while Paul is out — however long that will be. The Clippers come in still warm from waxing Utah and posting an offensive rating of 133.7 in the final four games after cracking one of the best defenses in the NBA.

This line opened as big as Suns -5 and is ticking down despite the bulk of bets and money sitting on Phoenix. At some bookies, Los Angeles +4 is priced at -115 as of the time of this writing, which would indicate a pending move to +3.5 should sharp play side with the Clips. Get all the points you can with the visitor and mind the juice.

The Clippers used their versatility and sharp shooting to rip apart the Jazz’s defense in the final four games, rolling out a smaller lineup and stretching Utah’s tight interior protection to the point of snapping.

Going with Batum at center and Marcus Morris Sr. at power forward, Los Angeles forced Utah’s rim protector Rudy Gobert to make a decision: abandon his post or let the Clippers bomb away from outside. Coach Tyrone Lue will attempt to do the same with Phoenix big man Deandre Ayton, so expect a lot of long-range launches in Game 1.

The Clippers hit over 46 percent of their 3-point attempts in the final four games versus Utah, averaging 17.5 per contest. Phoenix hasn’t faced a playoff foe with this much punch from the perimeter. The Lakers were duds from distance and Denver’s battered backcourt was missing its best long-range threat.

As for the Suns' scoring, they aren’t posing the same danger from the arc but they do have plenty of depth. Missing Paul takes the motor out of this offense but Phoenix has a takeover scorer in Devin Booker, who will likely need to go off in Game 1, and a dominant force inside with Ayton, who could have his way with a smaller Clippers lineup.

Los Angeles will be fine trading 3’s for 2’s all day, much like it did versus Utah — a series that pumped out four Overs in six games regardless of the teams’ defensive statures entering the postseason.

Ayton has been at the core of the Suns’ run to the Western Conference finals and while he could struggle with the smaller and quicker lineups the Clippers throw out there, he should be able to throw around his weight under the glass.

Ayton grabbed rebounding totals of 10 and 11 boards in his last two matchups with the Clippers and comes into this series averaging 10.5 rebounds in the sweep of the Nuggets. He was even more dominant on the glass in the Lakers series, pulling down 10.7 rebounds a game, including big nights of 16 and 17 boards versus a beefy Lakers frontcourt.

With such a long layoff between games and with Paul not out there creating easy looks for his teammates, I expect Phoenix’s shooting to be rusty early on. That adds up to plenty of misses and rebounding opportunities for the best big man on the floor. 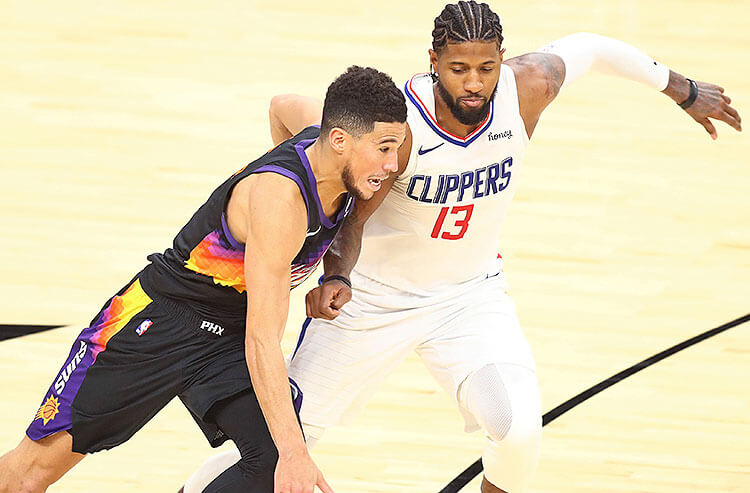 Clippers vs Suns Game 1 Picks and Predictions: Clips Come Out Firing
Provided by