The Clippers announced that star Kawhi Leonard will sit out tonight, and betting action promptly flipped in favor of the host Jazz. But that gives some good NBA betting value to the contrarian play, highlighted in our basketball picks for Game 5.

The Los Angeles Clippers were able to win two at home against the Utah Jazz and we are now all tied up at 2-2 in this series. Now, the Jazz host the Clippers for Game 5 at Vivint Smart Home Arena in Salt Lake City, Utah on Wednesday, June 16, with this one set to tip-off at 10:00 p.m. ET.

The Clippers are missing star player Kawhi Leonard, but can Los Angeles still steal this one on the road and take control of the series — or at least cover a spread that jumped quickly following news of Leonard's absence? You’ll want to keep reading our Clippers vs. Jazz picks and predictions to find out.

This is the massive mover of the day, which is what happens when a player the caliber of Kawhi Leonard is deemed out tonight and potentially the rest of the series. TwinSpires opened Utah -2.5 and got to -3 before this morning's news on Leonard's knee injury. "We initially saw Clippers money at +2.5, but since Kawhi’s injury, we reopened at Jazz -7, and it’s been all Jazz money ever since, pushing it to Jazz -8. We’ll need the Clippers to cover tonight," TwinSpires trading analyst Zachary Lucas said. Utah is taking only 55 percent of tickets, but 78 percent of money on the spread. The total fell to 220.5 from a 223 opener, with 56 percent of tickets/62 percent of cash on the Under.

The Under is 9-2-1 in Los Angeles’ last 12 games following a straight-up win. Find more NBA betting trends for Clippers vs. Jazz.

The Jazz are still waiting on the return of Mike Conley, and they can really use him at this point. Utah had a lot of success earlier in this series, but Los Angeles has adjusted and found a way to fight back in this series.

The Clippers have decided to go with a small-ball lineup, and that has really flustered the Jazz thus far. Perhaps bringing back one of the league’s best game managers would help Quin Snyder’s group turn things around.

Ty Lue deserves a lot of credit for making the necessary adjustments in this series. The Clippers have a 124.8 offensive rating in the 108 minutes they’ve played without a center against this Jazz team. They’re finding a way to make Rudy Gobert, one of the best defensive bigs in the history of the game, uncomfortable on both ends of the floor.

They’re also finding ways to hunt out Bojan Bodganovic, who has had trouble defending on switches. Now, Lue will be tasked with replacing the production of Kawhi Leonard, who now appears likely to miss the remainder of this series.

Without Leonard, it’s hard to envision a scenario in which the Clippers go and win this game outright. However, due to Leonard’s load management since arriving in Los Angeles, the Clippers should be used to playing without their superstar.

And while it’s definitely not something they’ll want to be doing, it’s entirely possible that they’ll cover a spread as big as this one. Los Angeles has a ton of irrational confidence players in its rotation, with guys like Marcus Morris and Reggie Jackson both capable of randomly getting hot. Also, George should be able (and, frankly, will be needed) to flirt with a 40-point performance in a go-to role.

Everybody in the world will be on the Jazz with the Leonard news that dropped this morning, but that’s more of a reason to back the Clippers.

The Clippers have been unstoppable on offense since going the small-ball route, but it’s going to be hard for them to score 125 points here, especially without Leonard.

Los Angeles certainly has a good opportunity to go out and win Game 5 but it’s unlikely the team will shoot quite as well on the road. The Jazz will also try to slow down the game a bit if the Clippers do start off with some otherworldly shooting, and that should factor into playing the total in this game.

Another thing you’ll want to keep in mind is that Conley likes to take his time in half-court situations. So, if he is out there in this game, his clock-bleeding tendencies won't do you any favors if you decide to bet on a high-scoring game.

George scored 31 points in each of the two games at Staples Center, and he also had 27 points on 8-of-18 shooting from the field in Game 2 of this series. The fact of the matter is that George has completely shaken off a 4-of-17 shooting game in the series opener and he knows exactly how to get good shots against this Jazz defense right now.

Utah is going to come out with a ton of energy after back-to-back road losses, and this crowd is going to give the Jazz a lot of adrenaline, but George is more than capable of going out and putting the Clippers on his back here, and this total just seems way too low for a player of his caliber.

With Leonard out, it all falls on George’s shoulders, and he knows his team is counting on him. 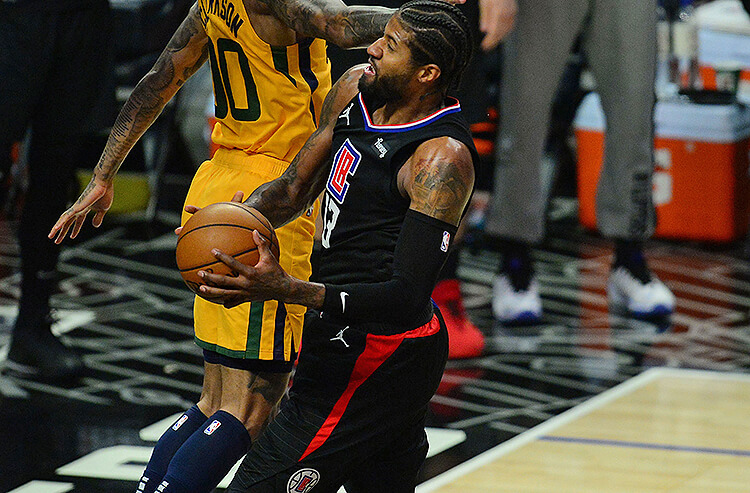 Clippers vs Jazz Game 5 Picks and Predictions: With No Kawhi, L.A.'s Playoff Hopes Rest on Playoff P
Provided by