The Sixers have been better in 6 of 8 halves this series against the Hawks, yet are tied 2-2 heading into Game 5. But with Philly's strong home play, and Atlanta's road struggles, our NBA pick tonight is the No. 1 seed pushing ATL to the brink.

The Philadelphia 76ers and Atlanta Hawks are locked at 2-2 in their Eastern Conference semifinal series, but this matchup may not be as close as that tally would indicate, with this NBA Playoffs set swinging back to Philadelphia for Game 5.

Two halves of basketball — the Game 1 first half and Game 4 second half — have been the difference-makers for the Hawks, who without Herculean efforts in those 24-minute segments would have been swept by the Sixers, who are 6-point NBA betting favorites at home Wednesday.

Check out our free NBA picks and predictions for Hawks vs. 76ers on June 16.

Philadelphia opened as 6.5-point chalk early Tuesday at PointsBet USA, briefly went to -7 and then to -6 by late Tuesday morning, then found its way back to -7 today. But it's two-way action as of 5 p.m. ET, with the 76ers taking 58 percent of spread bets and the Hawks drawing 53 percent of spread dollars. The total moved from 224.5 to 223.5 to 224, also on two-way play, with 58 percent of bets on the Over and 58 percent of money on the Under.

The Hawks’ victories in this series have not come without drama. They built a 74-52 lead at the halftime break in Game 1 and barely held on for a 128-124 win, then battled back in the final two quarters of Game 4 with a 54-38 second-half surge that erased an 18-point deficit in a 103-100 victory.

That most recent finish paints a prettier picture than the team that narrowly avoided a collapse in the series opener. Atlanta earned that comeback win in Game 4 with a gritty performance on both ends of the floor, boasting a defensive rating of 80.9 and an offensive rating of 114.9 in the second half.

However, boosting those numbers was an ice-cold second half from Sixers center Joel Embiid, who went 0 for 12 from the field in the final 24 minutes of Game 4 after dominating inside for the previous 168 minutes of conference semifinal action. Those misses allowed the Hawks to get out in transition, not having to inbound the ball every time Embiid had his way, and they beat the bigger 76ers down the floor and got better looks.

Embiid’s wonky knee is a concern but banking on him to struggle again (averaging 30.8 points on 44.8 percent shooting) with the series back home — and after missing a potential game-winning layup — is risky.

The Sixers’ offense may have flopped in Game 4, but their elite defense kept them in the contest. While Atlanta’s offense looked much better than the previous two outings, it still only shot 40 percent from the field in the second half, including just 7 of 23 attempts from 3-point range in the last 24 minutes.

Atlanta may have figured out a functional counter to the Sixers’ size, going big with a frontcourt of Clint Capela, Danilo Gallinari and John Collins (all standing 6-foot-9 or taller) but with that size comes a more plodding tempo. The pace of Game 4 switched from 103.0 in the first half to 94.0 in the second, leaving these teams to score a collective 92 points in the last two quarters after posting 111 in the opening half.

Philadelphia doesn’t want to trade 2-point FGs for triples with the Hawks and has done a good job getting heels above the 3-point line and using its length to bother Atlanta’s shooters, leaving ATL to fire at just 35 percent for the series. The Sixers don’t counter with much punch from distance, averaging under 11 makes from deep per game and 41.7 percent success from beyond the arc.

Atlanta knows this and will crowd in the interior with a longer lineup.

Curry is one of Philadelphia’s rare long-range threats and his 17-point effort in Game 4 was significant, hitting three triples early on to put the Hawks on their heels. He finished the night 3 for 6 from deep and is 15 for 26 from outside in the series — better than 57 percent.

In the postseason, Curry has made three or more 3-point buckets in six of nine contests and is firing at a 45.5 percent clip from distance in the NBA Playoffs.

The Hawks are going big and trying to push the Sixers to the perimeter, which is just fine for the “other” Curry brother. 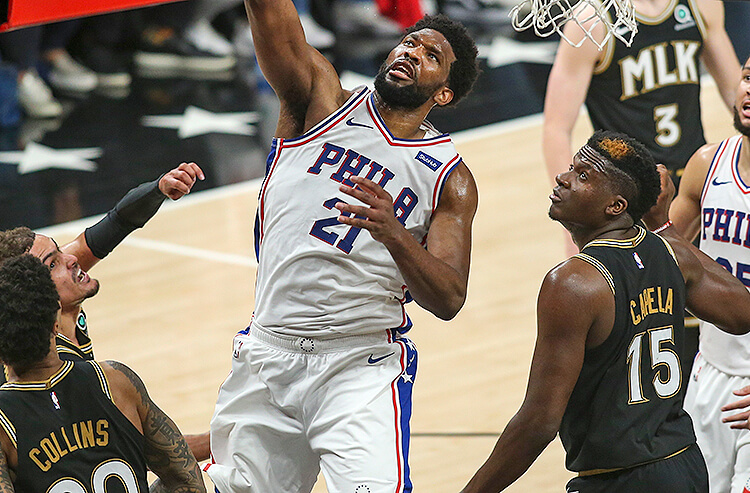