Nikola Vucevic is out for Chicago, so look for the Bulls to run a little more against Golden State, who could be missing Draymond Green. Find out how that plays into the NBA betting matchup with our Bulls vs. Warriors picks.

The Golden State Warriors will be looking for their seventh win in a row when they host a Chicago Bulls team that just found out it will be without Nikola Vucevic due to the NBA’s health and safety protocols.

Will Golden State, which the NBA betting odds for tonight has as a 5.5-point favorite, remain scorching hot when the team hosts Chicago at the Chase Center on Friday? Keep reading our Bulls vs. Warriors picks and predictions for Friday, November 12 to find out how it will go.

The Warriors are either a favorite of 5 or 5.5 in this game, which isn’t so different from the opening line of Golden State -5.5. A lot of bettors seem to be rolling with the home team in this one, but the line hasn’t changed much.

The Over is 6-2 in Golden State’s last eight games against teams with winning records. Find more NBA betting trends for Bulls vs. Warriors.

Bulls vs Warriors picks and predictions

The Bulls are going to be without Nikola Vucevic for a couple of games, which is definitely going to be a hit to this team. Even though the big man had been struggling with his shot, he was still averaging a double-double while also dishing out 4.3 assists per game. Vucevic was just a massive part of this team’s offensive identity, and the group will now need to find a different way to play in the short term.

Having said that, Chicago should still feel pretty good about its chances of hanging around with Golden State tonight. One of the reasons for that is that the Bulls have one of the best defensive pairings in basketball on the perimeter. That’s right, when Lonzo Ball and Alex Caruso are sharing the floor together, there aren’t many combinations in the league that can hound opposing ball handlers like they can. That’s especially important against this Warriors team, as Chicago just might be able to make life difficult on both Stephen Curry and Jordan Poole.

No team in the league can completely shut Curry down, but the Bulls aren’t going to have the types of breakdowns that teams like the Atlanta Hawks did when Curry went for 50 and had an abundance of clean looks at the basket.

It’s also extremely important that Draymond Green is dealing with an injury in this game. Whether he is out there and playing banged up or misses this game altogether, the Bulls should get better shots in the paint with Green not at 100 percent health. That’s especially important with guys like Zach LaVine and DeMar DeRozan, who are capable of getting to the basket at will.

Don’t be surprised if this ends up being a huge game for DeRozan, as the Bulls could look to go small with him at the power forward position. That was a spot in which DeRozan thrived as a member of the San Antonio Spurs. Chicago just needs to surround him with shooters.

With Vucevic out, it wouldn’t be all that shocking if Chicago plays at a quicker pace. The Bulls are currently just 17th in the NBA in pace on the year, but a lot of that has to do with them having a slow-footed big man that is at his best in half-court situations. Now, Chicago should look to take advantage of some if its athleticism by getting up and down the floor. The Bulls are even a bit quicker at center now, where Tony Bradley is more of a rim-running type of big. Overall, that should play into Chicago appearing in a few more high-scoring games over the next few weeks.

There’s just a lot to like when it comes to betting the Over in a game like this, and it’s also worth noting that the Over is 14-3 in Chicago road games when the team is coming off back-to-back home games over the last three seasons. The Over is also 6-2 when Golden State is coming off at least four covers in a row in that span.

DeRozan has scored at least 26 points in six of Chicago’s 11 games this season, and he should be looking at another big performance against Golden State. The Warriors play at the fifth-highest pace in all of basketball, which means that this should be an up-and-down game. And for all the talk about DeRozan and LaVine not being a great fit together, both of these guys are getting ample time with the basketball in their hands.

On the season, DeRozan and LaVine rank 21st and 23rd in the NBA in usage rate, respectively. Billy Donovan knows that the only way this Bulls team can thrive is if its two best players have the ability to do what they do best, and that is important when looking at player props.

Knowing that DeRozan will have the opportunity to create for himself, this number seems somewhat low in a game that has a relatively high total — and sharp action backing the Over. It doesn’t hurt that Golden State is just a middle-of-the-pack defense in terms of transition, an area in which DeRozan thrives.

Did you know that if you parlayed today’s NBA Bulls vs. Warriors predictions and picks in a single-game parlay, you could win $61.49 on a $10 bet? 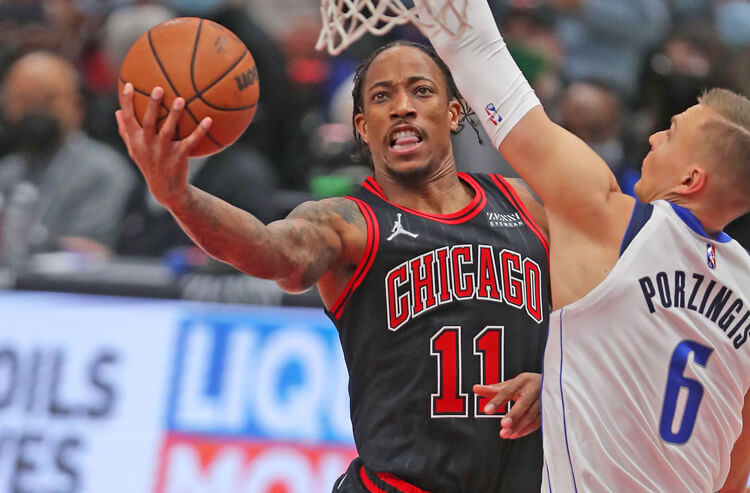