It might be tempting to grab one of the "favorites" at longer odds on this high-variance Talladega track, but our YellaWood 500 picks caution against many of the odds leaders, and find greater value with some longshots.

NASCAR's playoffs continue this weekend at Talladega, and oddsmakers aren't really sure what to make of it.

The YellaWood 500 odds are tightly-packed, and books aren't leaning too heavily on any one driver. But many of the so-called favorites can be written off, creating better value down the board — if you know where to look.

As the Round of 12 rolls on, check out our best free YellaWood 500 picks and predictions for Sunday, October 2.

Picks made on 9/27/22 at 3:00 p.m. ET.
Click on each pick above to jump to the full analysis.
Odds courtesy of DraftKings Sportsbook.

He has five Top-5 finishes in his last 10 Talladega starts and is a three-time Talladega winner. What I don’t like is that his finishes on superspeedways this season are 21st, 9th, 32nd, 26th, and 12th, respectively. However, he enters this weekend on the heels of a runner-up finish last week in Texas.

He has won two of his last six Talladega starts to go along with a Daytona win in last year’s regular-season finale. He’s become one of the best superspeedway racers in the sport and is coming off a fourth-place run last Sunday.

He won here last year and was runner-up in this past year’s Daytona 500, too. If he can stay out of trouble, the odds are good for a win on Sunday.

Looking for a longshot? This could be the race for it. On a high-variance track, we have a couple of extra drivers that should find themselves in the mix at Talladega.

He was second here in the spring and is coming off of a Daytona win in August.

He had a Top-5 car in February’s Daytona 500, and he was leading the spring race late before being shuffled from the lead to sixth on the final lap, as well as finishing fourth in Atlanta’s second race.

The Stewart-Haas Racing driver has eight Top-10 finishes in his last 12 starts at Talladega, including five in the Top 5. He won there in the Fall of 2018, was fourth and spun across the finish line to a third-place result in June of 2020

There are lots of reasons to fade the favorites for the YellaWood 500. We've expanded this section for this race, as many of the big-name drivers at or near the top of the odds board aren't worth backing.

He can win at any given time on a superspeedway, these odds and having no Top 10s in five superspeedway starts this season give me reason to pause. At Talladega, he was only 32nd and seventh last year, with an 18th in this year’s spring race.

This past spring was his first and only Talladega Top-5 finish. He’s just 1-for-34 for Top 5s on superspeedways. In fact, four of his last five finishes at Talladega are 39th, 40th, 40th, and 37th.

He won an Xfinity Series race at ‘Dega, as well as having two straight seventh-place finishes on the 2.66-mile track before being 39th last Fall. While he was 39th again this spring, he did finish runner-up at Daytona back in August. But coming off of a win, can he really make it two straight?

There have been only four Talladega sweeps in the last 38 years, so it doesn’t bode well for Ross Chastain to win again this weekend. In fact, while he has three Top-2 finishes in five superspeedway starts this season, two of the three were at Atlanta. He was 40th and 33rd, respectively, at Daytona.

Not one of his better races. Busch’s last eight finishes in the fall Talladega race have been 11th or worse, including his last six being 30th, 27th, 26th, 19th, 27th, and 27th, respectively. He was 32nd and 18th in two of the last three spring races too. He hasn’t had a Top-5 finish on the season since June 5 either.

He’s only had two Top-5 finishes in his last 21 Talladega starts. While he was fourth and eighth at Talladega last year, he’s had finishes of 30th, 21st, 10th, 12th, and 20th on these types of tracks this year.

You just get the feeling a win is coming soon for Keselowski. Leading 109 laps two weeks ago at Bristol turned into a pole last weekend in Texas. Now, we go to arguably his best track, where he’s won five times, including just last year.

Suarez, meanwhile, has one Top 10 in 11 Talladega starts, including being 23rd or worst in each of his last six starts there. This one seems simple.

With the odds the way that they are and a race that’s wildly unpredictable, let’s go with more favorites and sleepers since the money is there to make multiple picks at each. Plenty of top drivers truly don’t have much of a shot, and most of them are listed as favorites according to oddsmakers, which, in turn, helps you get more bang for your buck backing other drivers.

The ultimate wildcard of the 2022 playoffs is here but in saying that, past stats show that maybe this race isn’t much of a wildcard after all. Since 1995, only eight drivers have earned their first or second career wins there. Granted, this occurred the past two races there, but if you take a step back and look at the grander picture, you’d see that an unlikely winner isn’t all that likely.

Since the win and advance format was introduced to the sport in 2014, the Talladega playoff race has always been won by an existing playoff driver, with the lone exception of Wallace last year. That was one of six times overall that a non-playoff driver won.

However, this year’s playoffs have seen all four races won by four playoff-eliminated drivers.

There’s also the manufacturers’ race. Ford has won 10 of the last 14 Talladega races and should be a favorite. However, Chevrolet has won four of the five superspeedway races this season, and has done so with different drivers (Byron, Elliott at Atlanta, Chastain at Talladega, Dillon at Daytona). 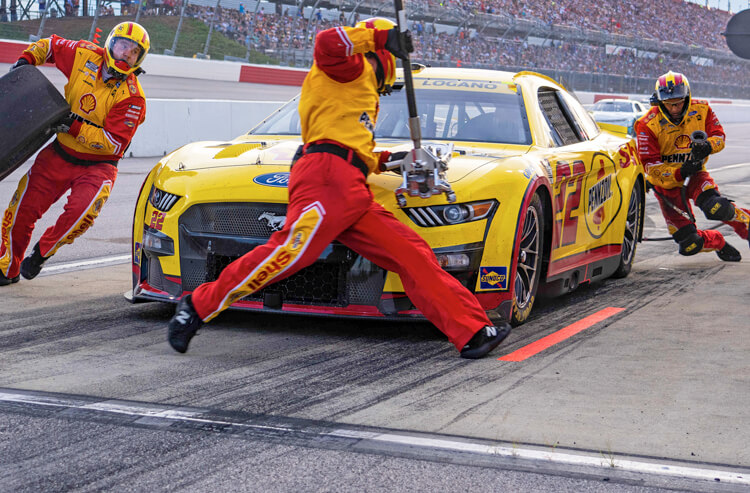