It's a wide-open field at Talladega, as six drivers are tied for the best odds. With the pressure turning up on several drivers for NASCAR playoffs, let's take a look at the YellaWood 500 odds.

NASCAR's wacky postseason rolls on as we get set for Sunday's YellaWood 500.

Tyler Reddick was eliminated from the playoffs at the Round of 12, but took out his frustration on the field last weekend, winning at Texas Motor Speedway and leaving the NASCAR Cup Series odds relatively static.

That makes four non-playoff winners in as many races this year. Will the extremely unlikely trend continue at Talladega?

Being run on a high-variance superspeedway, oddsmakers are tagging this as an extremely competitive race, with the favorites at much longer odds than you'd typically find, and six drivers knotted atop the board:

William Byron: Byron finished second at Talladega in the spring of 2021, but his last two finishes here are 26th and 15th. He has, however, finished Top-10 in all four playoff races.

Ryan Blaney: Blaney won this race in 2019 and followed up with another win at Talladega the next spring. The results haven't been there for him lately on this track, but he's still put up Top-10 finishes in six of the past nine races this season.

Joey Logano: The current Cup Series leader, Logano has been heating up, coming off a runner-up finish in Texas to punctuate six Top-6s in the last nine races. He's a former three-time winner at Talladega.

Denny Hamlin: Hamlin's won twice at Talladega and is dominant at Daytona, making him an overall strong pick on Superspeedway tracks. On the season, he's notched Top-10 finishes in six of the past eight races, with four of those in the Top 4.

Chase Elliott: Elliott still maintains a slim lead on the Cup Series odds board, but has been on the skids recently. Despite a runner-up in Bristol, he's finished 29th, 36th, 11th and 32nd in the rest of the last five races.

Kyle Larson: Larson has three straight Top 10s to keep himself in the Top 4 and within striking distance of defending his Cup Series title. Despite finishing fourth here earlier this year, it's not one of his stronger tracks, finishing 40th, 37th, 29th, and 24th in his previous four starts there. 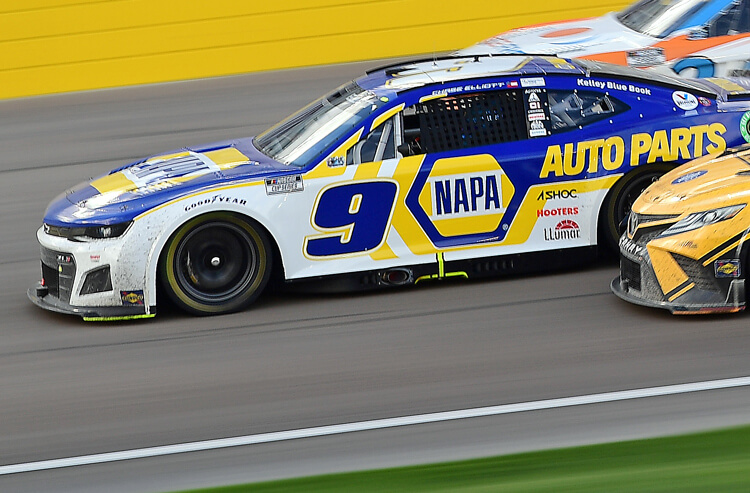 YellaWood 500 Odds: Tight Race at the Top
Provided by