Joe Gibbs Racing has dominated at Richmond, and the oddsmakers see something similar in store this weekend. Find out if our Federated Auto Parts 400 picks agree that Denny Hamlin, Kyle Busch, and Martin Truex will continue cleaning up.

They're no ordinary Joes.

Joe Gibbs Racing has cleaned up at Richmond of late, so it's no surprise to see them atop the Federated Auto Parts 400 odds. Can the rest of the field keep up as the playoff race heats up?

Let's break down the field and find the best trends and angles for NASCAR betting this weekend with our Federated Auto Parts 400 picks and predictions.

Picks made on 8/9/22 at 11:25 a.m. ET.
Click on each pick above to jump to the full analysis.
Odds courtesy of DraftKings Sportsbook.

They dominated the spring race, leading 149 of 400 laps en route to a Denny Hamlin victory. The win was Hamlin’s 10th Top-6 finish in his last 12 Richmond starts, including three straight prior runner-ups. He led 207 laps in the 2021 spring race and 197 more in the fall.

Martin Truex Jr. (+600) is equally strong here. He has eight straight Top-5 finishes at Richmond, including four Top 2s in his last six. He finished fourth this spring after leading 80 laps and scoring the stage win.

Kyle Busch (+700) has eight straight Top-9 results here, including a Top 2 in nearly half of his last 13 Richmond starts. He also has finished seventh, ninth, seventh, seventh, and second in five short-track races this season.

Christopher Bell (+800) was fourth and third, respectively, last year, sixth in the spring (led 63 laps) and was second in Stage 2. He has three Top 10s in this season’s last four short-track races.

Four straight Top 8-finishes, three of which in the Top 5. He’s heading to a track that’s been very good to Toyotas. Don’t overthink this one. While he has considerably lower odds than normal for a non-superspeedway track, ride the hot hand.

Was seventh last fall and third in both stages this spring. I still like him on Sunday. He’s finished in the Top 5 in three of the five short tracks run this season.

Worth a look coming off a win last week. He was runner-up this spring for his seventh Top-8 result in his last eight Richmond tries. He also has three Top 10s in five short-track races this season, including two at Phoenix and Richmond.

Alex Bowman (+3,000) lucked into a win last year for his only Top 5 in eight Richmond starts.

William Byron (+2,000) used strategy and strategy only to lead 122 laps this spring, in his only Top 5 in eight Richmond starts.

Kyle Larson (+1,000) has just one Top-5 finish in his last seven Richmond starts, and that was only fifth in the spring race. Last year, he was 18th in April and sixth in the playoff race.

They just don’t have the speed to win this race and quite honestly, they’ve not had it on the season recently, outside of Elliott.

I like plus money on the guy who has four straight Top 8s on the season, including three in the Top 5. I also like the fact that he drives a Toyota, and Toyotas have won nine of the last 13 Richmond races. Furthermore, this is one of Blaney’s worst tracks.

This is a grown-up track. With so much tire falling off, it suits the veterans now so more than ever. Three of the Top 4 finishers in April were each over the age of 40. So, between that and all the big teams winning here, it’s easier to find the victor.

The Toyotas are the heavy favorites, with them sweeping the action at Richmond in 2018 and 2019, part of nine trips to victory lane in the last 13 starts on the .75-mile D-Shaped Virginia oval, including this past spring. JGR went 1-2-3-4 across the finish line in Sept. 2019 as their top feat, but had the fastest race cars here in April too.

Hendrick Motorsports and Team Penske haven’t been at their best on short tracks this season, nor at Richmond as a whole lately either. That’s why this could be a Toyota/Joe Gibbs Racing show on Sunday.

The thing is, this may be Martin Truex Jr’s last shot at a victory during the regular season, so they really need him to triumph.

Starting position doesn’t matter here as much as other places. Drivers say in qualifying, you attack this track for two laps, but in the race, you have to baby the tires and take it easy. Push too hard in race mode, you fall backwards due to tire wear.

It’s why two of the last three winners started outside of the Top 10, including Denny Hamlin from 13th this past spring, and Alex Bowman from 24th the spring prior. That’s why the season may show 12 winners coming from a Top-8 starting spot in the last 13 races, but Richmond may be an outlier here this weekend. 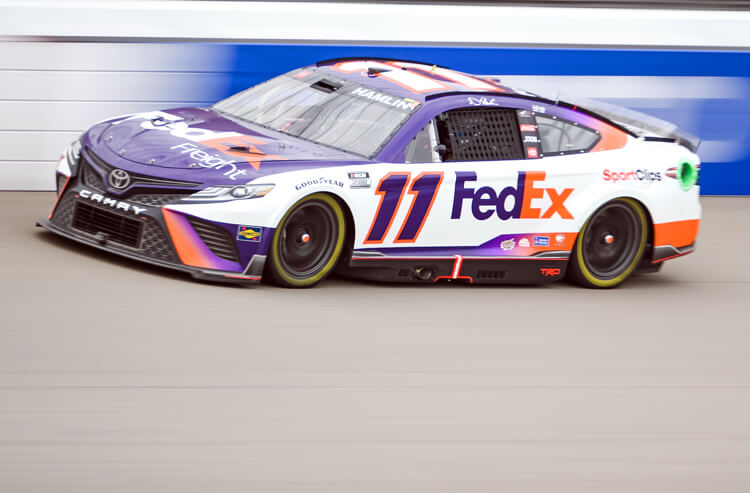