Chase Elliott's recent road course dominance makes him the man to beat for NASCAR Jockey Made In America 250 picks. With this being an inaugural race, there aren't many trends to lean on for NASCAR betting, but we're still bringing you the best picks.

NASCAR betting gets thrown another curveball this weekend as an inaugural race – on a road course,  at that – is tossed into the schedule.

The Cup Series visits Road America for the first time in over 60 years for the Jockey Made In America 250, in what's shaping up to be a race with several interesting dynamics.

Get the inside track on your NASCAR bets with Covers Experts' Auto Racing Advisor preview and picks for the Jockey Made In America 250, which gets underway at 3:00 p.m. ET on Sunday, July 4.

Jockey Made In America 250 favorites

You can also never count out Martin Truex Jr. (+600) either. He was 12th on the Daytona road course earlier this season but that's because of a bad ending. He crashed in the rain in COTA and was third at Sonoma. From 2017 through 2020, Truex had three wins, two runner-ups and a third-place effort in nine road course starts. The only reason it’s not four wins is because he crashed with Jimmie Johnson on the last lap in the last corner of the ROVAL race at Charlotte while leading in 2018.

Jockey Made In America 250 long-shot picks

Don't overlook Joey Logano (+1,200). In three road course races this season, he has a Top 5 in each. Also, Alex Bowman has three Top 10s in as many tries on the trio of road courses as well. The other ones to watch are Chip Ganassi Racing. Remarkably, they've had a Top 10 in all three races, with Kurt Busch finishing fourth in Daytona and sixth in Sonoma while Ross Chastain was fourth in COTA and seventh in Sonoma too.

Jockey Made In America 250 fades

Jockey Made In America 250 preview

For the second time in three weeks, we have an inaugural event on the NASCAR Cup Series schedule. The teams make their way to the third different track in as many years on the Fourth of July weekend, as from 1959 through 2019, we’ve always been in Daytona for the Firecracker 400. To spice up the race for the playoffs, that event was moved to the regular-season finale for 2020 and beyond.

For this weekend in general, there are a lot of unknowns. How will the race look? Who are the favorites? What does this race do for the playoff picture?

For starters, you have to eye the Hendrick Motorsports camp as the favorites. Their six-race win streak came to an end last Sunday, but they still scored a sixth Top 2 in the last eight races.

Chase Elliott should have won the race at Daytona back in February. A fluke caution for rain dashed those hopes. He was repaid for NASCAR ending COTA early due to rain while he was leading. The last road course race, he finished second to Kyle Larson.

HMS should be 3-for-3 this season because of that.

Kyle Larson was runner-up to Elliott in COTA and won in Sonoma, so watch out for him. He’s had a Top-2 result in seven of the last eight races on the season. Alex Bowman has three Top 10s in as many tries on road courses this season too. One driver who’s baffling is William Byron. He’s had a Top 10 at every track minus Daytona, Pocono and the three road courses.

The other end of the spectrum is the playoff outlook. Right now, Denny Hamlin, Kevin Harvick, Austin Dillon and Tyler Reddick are further distancing themselves from the first driver out. Kurt Busch made up more points last weekend and went from -83 four races ago to now +3, bumping Chris Buescher out.

The five current wildcard drivers can play it safe on Sunday and take the stage points and move even further ahead. I mean, why not?

Do they have anything in terms of a race win? I don’t see it out of them right now. So, why not take the points? We’re to a point where I don’t see a fluke winner on a road course anymore. Elliott, Larson and Truex Jr. are just too good. If they don’t win, Logano and Busch are right there. They’ll be hard to beat on pace, as strategy will be the only way we get a fluke winner, but with Road America being so big and having run-off space, we may not get many fluke cautions.

So, how does strategy play into this race and how do the teams figure out a way to make it work?

The guys between 15th-20th in points have to play it conservatively. 21st on-back in points need to swing for the fences. The guys that already have wins this season can do the same. It’s just the few going for the wildcard spots that might as well go for points. 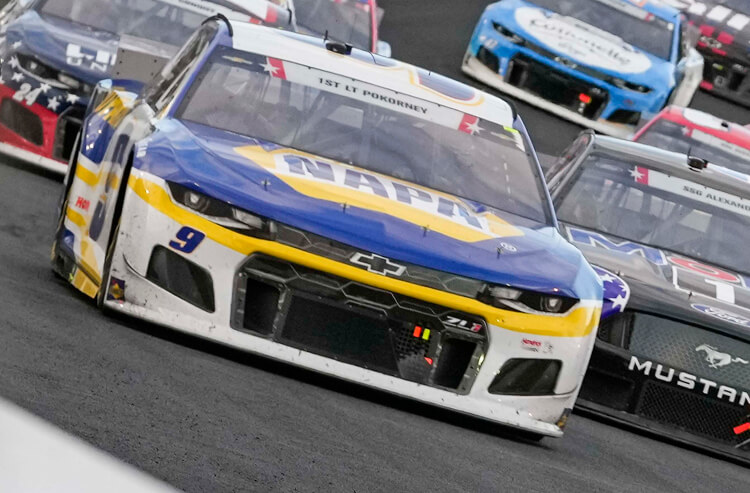 Jockey Made In America 250 Picks, Predictions and Race Preview
Provided by