New York City FC have been in great recent form as they head into the U.S. Open Cup semifinal, but have lost the manager who helped them achieve it, to begin with. Will there be ripples through their play? Find out with our MLS betting picks.

In the regular season, the bitter rivals are battling for first place in the Eastern Conference, adding further intrigue to the anticipated knockout match.

Wednesday’s contest marks the third time these two New York-based teams will meet in the U.S. Open Cup, with the Red Bulls winning both previous encounters.

If you're signing up for a new sportsbook for some U.S. Open Cup betting, here are two of the best bonuses* available:

A) Red Bulls to win + both teams to score BOOSTED to +500 at Betway! Claim Now

Wednesday should see a high of 21 degrees celsius with a 56% chance of precipitation. Intermittent showers are expected at game time with accompanying light 11 km/hour winds.

The Red Bulls have inarguably gotten the better of New York City FC, winning 12 of 21 all-time contests against their cross-city rivals. That winning feeling also pertains to the last five head-to-heads, in which the Red Bulls have tasted defeat just once (three wins, one loss, one draw).

Looking beyond their head-to-head history, New York City FC is enjoying a sizzling run of form. City, prior to their 1-1 draw against Colorado on Sunday, won six on the bounce in all competitions and nine of their last 10.

Their only blemish in that 10-match spell came at home against Sporting Kansas City, a 0-0 stalemate on May 7. The Cityzens didn’t concede a goal during their recent six-match winning streak, an odds-defying run of clean sheets.

They outscored opponents 10-1 during that streak, which started on May 11 with a 3-1 victory over Rochester New York in the U.S. Open Cup round-of-32 match.

For all their recent success, one has to wonder how the mid-season exodus of head coach Ronny Deila will impact the side. Deila joined the club before the 2020 season and led NYCFC to their first MLS title just a year later.

He left the club last week after deciding to take the helm at Belgium’s Standard Liege. Former assistant coach Nick Cushing is the Cityzens' interim manager while the club decides how to proceed on a permanent basis.

Cushing’s first match as manager saw the Cityzens tie Colorado 1-1 at home. Prior to that match, the Rapids had the worst away record in the Western Conference. Colorado registered their second point from seven away encounters in the shocking result.

Cityzens supporters will hope that performance was a standalone anomaly, a minor blip on what has been an otherwise outstanding recent run. They’ll also hope the disappointing draw that coincided with Cushing’s first match in charge was nothing more than coincidence.

It’s natural for a team to endure a hangover-like stint in the wake of losing an elite manager, especially in such abrupt, unforeseen circumstances. That factor provides a slight advantage for the Red Bulls, who’ve won three consecutive matches on home soil.

Aside from their recent success at home, the Red Bulls have endured an inconsistent stretch of results. Gerhard Struber’s side have only won three of their last seven in all competitions.

Despite that topsy-turvy spell, the Red Bulls find themselves just a point adrift of the first-place Cityzens.

While losing Deila is a devastating blow, the Cityzens are too strong and talented to suffer an extended slump or any long-term rot.

That said, expect some lingering side effects to carry through their quarterfinal match, preventing the Cityzens from capturing their first U.S. Open Cup semi-final berth.

Look for the Red Bulls to prevail in a low-scoring contest, probably in extra time.

Prediction: Tie after regulation (+230 at FanDuel)

The last six New York City FC matches resulted in the Under. The Cityzens’ success is predicated on keeping things particularly tight at the back. They’ve conceded one goal in their last six matches, five of which resulted in a clean sheet.

The Red Bulls play a looser brand of soccer, making Over/Under predictions all the more difficult where they’re concerned. Of their last six matches in all competitions, three ended on either side of the O/U fence.

This match, however, represents a chance to advance to the Lamar Hunt U.S. Open Cup semifinals, which will result in a more cautious approach from both teams, certainly in the opening 45 minutes.

The Cityzens are perpetually responsible defensively, while the Red Bulls will take it upon themselves to play with a heightened sense of defensive awareness.

The Red Bulls have scored at least a goal in their last five home matches and the Cityzens have netted at least one in seven consecutive games. Both teams to score in a regulation draw offers a high-value +420 return.

If you’re feeling bold, back the 1-1 draw going into extra time. FanDuel is currently offering odds of +600 for that outcome.

Pick: Both teams to score + regulation-time draw (+420 at FanDuel) 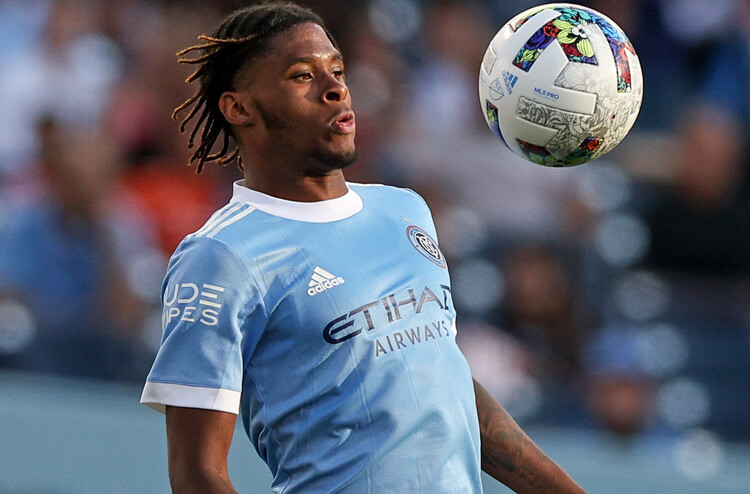