Atlanta United have not only been one of the worst road teams in MLS this season — they've been downright uncompetitive in every visit to New York for years. So, our MLS betting picks will be no surprise as they visit the Red Bulls.

After a rough weekend in California, the New York Red Bulls return home for a showdown with Atlanta United in MLS action on Thursday night. The Red Bulls have never lost to Atlanta, winning six of their 10 regular-season matchups.

New York will likely be without the services of its top playmaker, but it’ll still like its chances against an Atlanta side that has failed to score in any of its last four trips to Red Bull Arena.

See how the match will break down in our New York Red Bulls vs. Atlanta United picks and predictions.

Fans and players alike will enjoy the weather on Thursday evening, with temperatures in the upper 70s. There is a zero chance of precipitation, with winds expected to be nearly non-existent.

Sunday’s match at LAFC was anything but California dreaming for the Red Bulls. Their two best players, midfielder Luquinhas and defender Aaron Long, both missed the match due to COVID-19 protocols.

Both players were sorely missed in the 2-0 defeat, especially Long. They conceded two goals in the span of four minutes after playing valiantly for nearly an hour after traveling across the country and battling extremely high temperatures.

Fatigue was evident in the second half, but they could have considered themselves a bit unlucky to not find the back of the net. They took 16 shots, putting four on target and hitting the frame with another, and looked the better side for the opening half-hour.

Atlanta’s weekend wasn’t much better, losing yet again on the road. The 2-1 defeat at Toronto marked its sixth consecutive away match without victory, as it has now won just three times in 13 away fixtures since Gonzalo Pineda took over.

Atlanta’s lone away victory in 2022 came via a stoppage-time goal against lowly DC United, as it’s now lost five of seven away excursions this campaign.

Luis Araujo is in terrific form, easily the best player on the pitch for the Five Stripes over the past month. He’s scored two of Atlanta’s three goals in its past two matches, assisting the other, but his second-half equalizer last week was not enough to secure a share of the spoils. Atlanta managed just two efforts on goal in the defeat, despite 15 shot attempts, and has scored just six goals away from home.

New York has outscored its last two opponents 6-1 at home, albeit with three of those goals coming off the foot of Luquinhas. His absence will be a big one, but midfielder Lewis Morgan is also in stellar form, and he’s tallied three goals and two assists in seven career matches against Atlanta.

One of Atlanta’s biggest issues has been set-pieces, as it has conceded eight goals from dead-ball situations — the second-most in the league. This is an area where the Red Bulls have thrived, having scored the third-most goals in the league from such situations.

This, combined with Atlanta’s inability to consistently produce at the offensive end versus a defense playing fairly well at home, is the main reason I’m backing the Red Bulls to win despite the juice.

If the Five Stripes find a way to score on Thursday night, it will mark the first time in six visits that they’ve broken through the Red Bulls' defense.

Atlanta has been poor on the road this season, but its struggles against New York go back quite a way. Making matters worse, it’ll be without fullback Brooks Lennon, one of its best playmakers, after he was injured in warm-ups before the Toronto match.

With just six goals to in seven away fixtures, while being shut out twice, Atlanta is in a precarious spot. If Long returns to the lineup as expected, it will be even tougher for the visitors to score. Factor in the solid form of late from Red Bulls’ keeper Carlos Coronel, and you have a perfect recipe for yet another bagel on the scoresheet for the visitors.

Atlanta has trailed at the break in five of its seven away matches this season, in large part due to the five goals it has conceded inside the opening quarter of an hour. It has also trailed heading into half in four of its last five on the road. At the other end of the pitch, Atlanta has scored just two goals in the opening stanza this season.

New York is a side that presses from the outset and disrupts what its opponent wants to do from the jump. The Red Bulls are yet to trail going into the break in any of their eight home matches, leading just twice due to scoring only three first-half goals. That said, they’ve also conceded just once in the opening 45 minutes.

The probability of Atlanta leading at the break is quite low, and the odds of New York leading are better than the price being offered would indicate. Take the Red Bulls to outscore Atlanta in the first half for the easy cash. 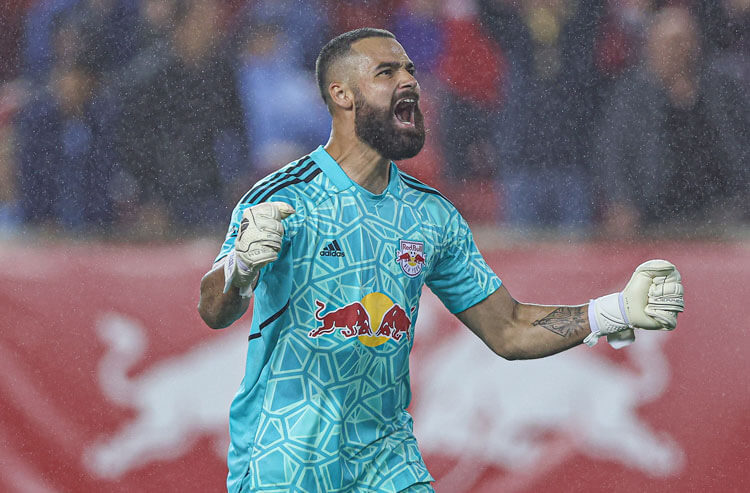