Frankie Montas' numbers certainly don't instill much confidence but a strong start against the New York Mets has us believing in him tonight in a favorable matchup with the Angels. Read more in our Yankees vs. Angels betting picks below.

The New York Yankees and Los Angeles Angels meet up for a three-game set in L.A. late Monday night.

The Yankees have been better of late but come into today off two consecutive losses to the lowly Oakland A's. Their lead in the AL East has been shortened to just 7.5 games.

As for the Angels, they've been well out of the playoff picture for some time now. They come into today winners of four of their last 10.

Who will grab the series opener? Find out in our MLB picks and predictions below.

The Yankees opened up today as -180 favorites. Since then, the Angels have taken a bit of money and fallen to -175. The Angels return at around +160. The total opened at 8 and has stayed at that number.

Frankie Montas (4-10, 3.84 ERA): While Montas has had issues since putting on the Pinstripes, perhaps that's finally changing. He arrives at this one off his best start in a big game against the New York Mets, where he surrendered just two earned runs in just over five innings of work. I had spoken about how Montas was due for some positive regression before that game, and it should continue. His xERA says he's more of the guy that he was in Oakland earlier this year than who you've seen mostly in New York. He does a pretty solid job of everything but sometimes has some issues with barrel rate.

Jose Suarez (4-6, 4.19 ERA): Suarez has had an average year in L.A. and is currently in the midst of his best month of the season. In August, he's made four starts, posting an ERA of 2.38 along with 23 strikeouts, but I'd venture to say that Suarez's success is more of a product of matchups than anything else. This month, he hasn't seen a team that can target his issues with barrel rate and exit velocity. In his last start, he gave up three earned runs in just over five innings of work to the Tampa Bay Rays. He features a good mixture of fastball and change-up in his arsenal.

The Yankees are 7-3 in their last 10 meetings at Angel Stadium. Find more MLB betting trends for Yankees vs. Angels

Yankees vs Angels picks and predictions

This is a matchup against one of my favorite teams to bet against this season vs. one that's been pretty hard to figure out this August. I'm going to roll with the Yankees here as they have a pretty sizable edge at the mound.

Pitchers that have issues with barrel rate are not pitchers I'm keen to back against this Yankees offense. That holds particularly true when they are in the midst of a two-game losing streak like they are now.

The Yankees have the second-best barrel rate in baseball behind the Atlanta Braves. The team that's third on that list is the Los Angeles Dodgers. Suarez saw them back in July and coincidentally had his worst start all season. He gave up six earned runs in three innings, including three home runs. See why it's hard to fade the Yankees with Suarez on the mound? I'm expecting bats like Aaron Judge and Giancarlo Stanton, among others, to have success tonight. The data shows that, too.

I'm not sure Montas will dominate games, but I think he has a decent matchup here. Montas' success is predicated on batters chasing pitches off the plate, and the Angels' struggles with that are well-documented. No team in baseball swings more and gets less contact on pitches than L.A. So while Montas has had his issues, he's the better pitcher for the matchup of the two today.

I'm taking the Yankees to be ahead after five innings. Look for them to be laser-focused on breaking out of this losing streak and take advantage of the pitching matchup.

Above I noted that I don't expect Montas to dominate here, but it's still possible. So I'm grabbing him to at least grab a solid start, and he'll do that by holding the Angels to less than two runs for five innings.

My projections have the Angels scoring less than two runs around 57% of the time. That's a solid edge vs. the current number. In addition, it is the most significant edge I'm seeing on any total for this matchup.

Montas' matchup is simply about taking advantage of what the Angels batters have done all season. The Angels have baseball's lowest contact chase rate and the third-highest chase rate. That's not a good combination for any team and explains why they've been a favorite among betters for the opposing pitchers' strikeout prop.

But, as previously stated, when Montas has the most success, it's when he's getting pitches chased out of the zone. He faced the Angels in April, having 12 strikeouts and surrendering two earned runs in six innings. Two that were both surrendered in the sixth inning.

Fading the Angels' offense has been fun this season. I see little reason not to fade it again here. Montas has a solid matchup and needs to build on his past performance against the New York Mets.

I'm going to have some fun for our best bet tonight.

According to BallparkPal.com, conditions in Angel Stadium will be favorable for home runs tonight. Winds will blow out to the right field and warm enough for the ball to travel. In addition, we're getting a pitcher with an issue with barrel rate. I don't think I have to say much more than that to justify Aaron Judge to hit a home run.

However, I will pair that with an alternate strikeout total for Frankie Montas because of the price. He had 12 the last time he saw this Angels lineup, so I expect him to quickly get to this number when he needs a big start. 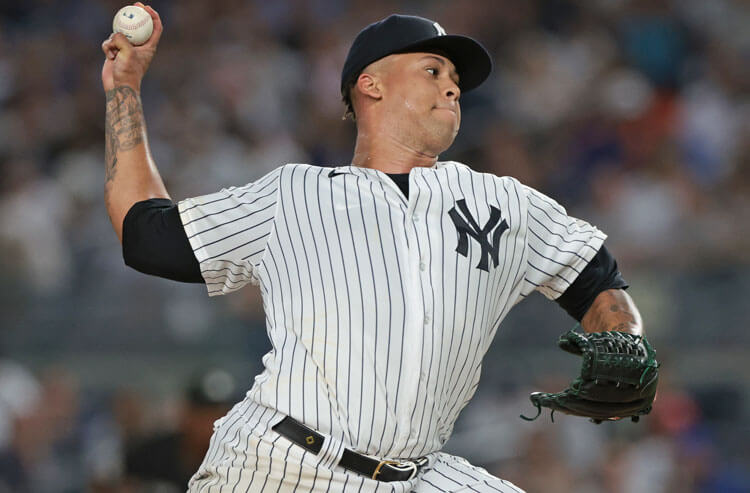