The six teams sportsbooks fear most to win the World Series

Like every MLB season, the Chicago Cubs took a ton of World Series futures action. But this year, the Cubbies might actually pull it off, which has sportsbooks sweating.

Jason Logan
Last Updated: Sep 23, 2015 1:25 AM ET
Photo By - USA Today Images
The leaves are changing, which means the calendar is almost flipping to October. That also means playoff baseball and the fruition of those World Series futures bets made what seems like soooooooo long ago.

Sportsbooks, like MLB bettors, will have a rooting interest during the postseason, as it pertains to liability in the World Series futures market. We talked to books in Nevada and online about which teams would do the most damage to the MLB futures book should they win the Fall Classic:

Echoed by brick-and-mortar and online sportsbooks, the Chicago Cubs draw action every year from the Windy City faithful. And every year, the Cubbies come up short. Way short. Well, maybe not his year. Chicago, which opened as big as 40/1 last fall, is second in the Wild Card standings behind division rival Pittsburgh as of Wednesday.

“This is just payback for all those years of taking all those Cubs futures bets without thinking they ever had a chance,” Steve Mikkelson, sportsbook director at the Atlantis Resort and Spa in Reno Nevada, tells Covers. “We’ve taken action on them at every stop: 20/1, 18/1, 16/1. We’ve got them down to 10/1 and while it’s calmed down, we’re still taking action on them.”

Going back to October, the hiring of manager Joe Maddon prompted even more futures money on Chicago than usual, dropping the Cubs down to 25/1, and it’s been a steady stream of futures wagers on the Cubbies ever since. Most books are dealing Chicago between +1,200 and +650, depending on how much liability has stockpiled under the Cubs.

Depending on where you play or where you call home, the price on the Blue Jays could be different. In Las Vegas, Toronto opened at 30/1 to win the World Series and is down to 5/1 as of the start of the week. But north of the border, in Canada, where Blue Jays fever is reaching an all-time peak, you’re paying a premium to bet Toronto at +175 – the favorite to win the Fall Classic.

“As a Canadian book, we have a lot of Blue Jays fans playing with us,” Greg Sindall, of SportsInteraction tells Covers. “A lot of the action on the Jays is in the 14/1 to 18/1 range before the trade deadline. And then we also took a lot of action at about 7/1 just after the deadline before they went on that big winning streak.”

Toronto is currently leading the American League East, ahead of the New York Yankees by 2.5 games following New York’s extra-innings win over the Jays Tuesday. Toronto’s lineup ranks tops in most offensive categories and its pitching staff has been superb since mid-season, boasting a collective 3.24 ERA since the All-Star break – second lowest in the majors.

“The Jays are my team, so if they make it to the World Series I will be watching the games with conflicted feelings,” laughs Sindall.

Much like the Cubs, the Mets have a loyal following of baseball bettors who blindly take their team to win it all each spring. And, like Chicago, New York has bookies against the wall when it comes to its once-lofty World Series odds.

“We’ve got Chicago and right behind them, the second worst is the Mets,” Jason Simbal, vice president of risk management for CG Technology in Las Vegas, tells Covers. “They’re from big cities and they’re both public teams that people just love to pump. And, of course, they had such high prices early in the year.”

The Mets currently lead the National League East by 6.5 games, thanks in large part to a stellar starting rotation that boasts a 3.48 ERA, which sits third lowest among major league clubs. New York has also been dynamite at home with a 48-29 record inside Citi Field as of Wednesday.

The AL West has been a bizarre division this season, with the Angels, A’s and Mariners sinking to the bottom and the Rangers and Texas-rival Astros rising to the top. Texas, which finished dead last in the American League last season, holds a two-game edge over Houston in the standings.

“Really, this team kind of came out of nowhere in what was supposed to be a super-competitive division, only the teams that were supposed to be competitive – the Mariners and Angels - haven’t been,” Pete Childs of Sportsbook.ag tells Covers. “And the Astros, who had the division nearly wrapped up less than three weeks ago, have complete floundered down the stretch.”

As mentioned above, Houston jumped out to a strong start in the AL West and is currently sitting second in the AL Wild Card standings behind New York. But the Astros have run out of steam this month, struggling through a 7-13 record in September and watching their ERA balloon to 4.96 in that span. In contrast, Houston has a MLB-low 2.61 ERA in August.

“Houston is a team we'd rather not see in the postseason,” John Lester of Bookmaker.eu tells Covers. “Many of our sharper clients were high on them early, for good reason, so we have some exposure there. We had the Astros at +9,500 to win it all at the beginning of the season.”

The Royals were offering solid value when the 2015 World Series futures hit the board last October, just coming off a loss to the San Francisco Giants in the Fall Classic. Kansas City has maintained its spot atop the AL for the majority of the season, sitting 1.5 games ahead of Toronto for the No.1 spot in the American League as of Wednesday.

“We took some big bets on the Royals,” Nick Bogdanovich, U.S. director of trading for William Hill, tells Covers. “We got stung good with some five-figure futures bets at 18/1, 12/1 and 8/1. They bet them a long time ago, so they’ve earned it.” 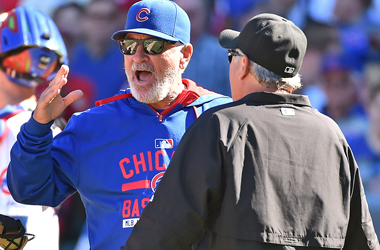