The San Diego Padres have been hit hard by health and safety protocols, without several of their top sluggers again for Tuesday's contest against the Colorado Rockies.

The Padres will send offseason acquisition Blake Snell to the mound against Austin Gomber, in hopes that the former Cy Young winner can start to turn an inconsistent season around against one of the MLB's worst-hitting road teams.

Find out who has the betting edge tonight as we break down our free Rockies vs. Padres picks for Tuesday, May 18.

San Diego opened a solid -195 favorite and surged upward from there at TwinSpires, moving all the way out to -235 as of 7:15 p.m. ET. The Padres are grabbing 87 percent of moneyline bets and 92 percent of moneyline cash. "It's all Padres – moneyline, runline and first five innings. The Rockies' overall play and 2-15 road record aren't attracting much support," TwinSpires trading analyst Zachary Lucas said. The total is stable at 7 on two-way action, with the Over getting 55 percent of bets/57 percent of money.

Austin Gomber (2-4, 5.49 ERA): Gomber has had an up-and-down 2021 campaign, most recently holding the Padres to one run on four hits in just over five innings of work last week. Like most of the Rockies' rotation, he struggles with WHIP (1.35) and has had issues with control at times.

Blake Snell (1-0, 4.19 ERA): Snell has been somewhat shaky to start his Padres tenure. While he's struck out 49 batters in 34 1-3 innings, he's also walked 24, struggling with his control en route to a less-than-stellar 4.19 ERA while failing to pitch six innings in any single start thus far.

The Padres are 5-0 in their last five home games. Find more MLB betting trends for Rockies vs. Padres.

The Padres continue to weather the effects of COVID-19, which has claimed MVP candidate Fernando Tatis Jr., along with Eric Hosmer and Wil Myers. Fortunately for the Padres, they boast a deep bench that can still put runs on the board, as evidenced by their 13-3 shellacking of the Cardinals on Saturday or the 7-0 whupping they put on the Rockies last night. San Diego is 7-3 in its last ten games, outscoring opponents by 31 runs over that span.

One thing working against the Padres is that they don't produce against lefties, ranking 22nd league-wide with a .219 BA, and 25th with a .650 OPS against left-handed pitchers.

While the Padres might be weak against southpaws, the Rockies are absolutely abhorrent on the road. Colorado ranks dead last in the MLB with a .593 OPS outside the cushy confines of Coors Field. Contrastingly, the Rockies mash against lefties themselves, ranking fifth in OPS, ninth in hits, and third in BA.

Further complicating matters is the status of Snell, who won a Cy Young less than three years ago, was stellar as recently as last fall, but has struggled with control in his new uniform and is walking batters at an absurd rate.

This game could be a wash between trends at the plate, with Colorado so strong against lefties but weak on the road. Snell had a subpar outing against them last week, but is pretty close to his floor right now, while Gomber has straight-up struggled on the road (1-3 with a 7.56 ERA).

There's little separating these two sides at the plate statistically, while San Diego has the better of the two starters, and holds a massive edge in the bullpen, where their ERA (2.70) is second-best in the majors, and the Rockies' (5.75) is second-worst.

We're not huge fans of the Friars' moneyline value here (-230), so let's put our faith in them to deliver another comfortable victory on the runline.

This total opened low, and understandably so, given the Padres are missing several big bats and the Rockies can't hit the broad side of a barn away from Coors.

But there's still potential for an Over here, especially given how weak the total is. First off, the Rockies are 6-1-1 against this total in their past eight games, while the Padres are 8-1-1 in their past ten.

We noted Gomber's road struggles above, so he's liable to get lit up by SD's still-capable lineup. Meanwhile, Snell can still put himself in sticky situations if he keeps walking batters like they're old ladies he's helping across the street. The biggest liability to an Over here might be Snell's short outings and the Padres' mostly-right-handed bullpen reducing the Rockies to their dust road selves.

But between recent trends for both teams and the fact that neither starter is throwing his best stuff right now, we like this one to surpass the total. 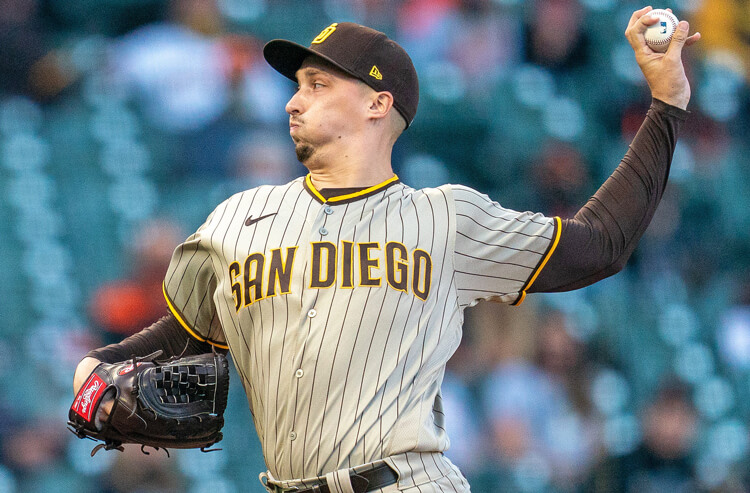 Rockies vs Padres Picks and Predictions: Can Rockies Get to a Lefty?
Provided by