Red Sox vs Yankees Picks and Predictions: Justifying the Over Beyond Just Judge

All eyes are obviously on Aaron Judge, who is chasing both Roger Maris and a Triple Crown, when the Yankees host the Red Sox this afternoon. Our free MLB picks love the Over — but it's not just because of New York's No. 99.

The Boston Red Sox and the New York Yankees will renew acquaintances at Yankee Stadium on Saturday afternoon as Aaron Judge’s quest for baseball immortality continues.

Judge went a third straight game without homering on Friday night, remaining at 60 dingers for the year, but the Yankees still came away with a 5-4 win.

The Bombers have now assured themselves at least a split of this series, and have whittled their magic number down to six games to clinch the American League East title.

Can the Red Sox get on the board in the Bronx, or will New York keep rolling against its biggest rival? Find out in our free MLB picks and predictions for Red Sox vs. Yankees on Saturday, September 24.

Aaron Judge and the New York Yankees’ offense should carry the day for Over bettors, but there are also other factors that make an Over wager so compelling in Saturday afternoon’s showdown.

Gleyber Torres hasn’t been nearly as hot as Judge has been for the Yankees, but he’s hitting .373 over the last two weeks with four round-trippers and 16 RBI. Josh Donaldson took an 0-for-4 on Friday, but had 10 hits in his prior 30 at-bats, with a pair of four-baggers and six runs driven in.

Harrison Bader also did not take long to make an impression on Yankees fans, amassing four hits and six RBI in his first three games before stealing his first base and tallying his first run (the winning run) in pinstripes yesterday.

This is all going on while Judge is mashing baseballs at a historic rate — his OPS in September is an eye-popping 1.504.

Boston Red Sox starter Nick Pivetta clearly has his work cut out for him, and he’s a woeful 0-2 with a 9.64 ERA and .325 opponent batting average in four starts against New York this season. The relief arms behind him could struggle too, based on their 64.8% strand rate over the last two weeks, good for 25th in the majors.

Domingo German has been a wild card for the Yankees in 2022, and if anyone gets to him in this one, it will likely be Alex Verdugo or Xander Bogaerts, who are a combined 10-for-31 (.323) lifetime off him with a pair of homers.

The New York bullpen has been a source of strength for most of the year, but September has been a different story. This unit is 21st by strand rate (67.2%) over the last two weeks.

A) Aaron Judge and Giancarlo Stanton to each hit a home run BOOSTED to +1,000 at Caesars! Bet Now

B) Gleyber Torres, Josh Donaldson, and Anthony Rizzo each to record a hit BOOSTED to +225 at Caesars! Bet Now

MLB odds have Yankees’ moneyline price a bit inflated, but there’s no value in a losing ticket and the Bombers should beat Boston today.

German has a quality start in his only appearance against the Red Sox this season, holding them to one run over six frames on August 12. Six innings could be the limit for German, however, after recording only 2 2-3 innings of work since September 7.

Red Sox fans might be encouraged by Pivetta’s home/road splits in 2022, as his ERA as a visitor is nearly a full run lower than his Fenway mark (3.84 compared to 4.81), with a stark difference in opponent batting average (.277 at home/.220 on the road).

However, this seems like false hope based on further review: the British Columbia native has lost each of his three career starts at Yankee Stadium, authoring an abysmal 11.57 ERA and 2.057 WHIP over 11 2-3 innings.

Trend bettors should note that the Yankees are 51-19 in their last 70 home games, while the Red Sox are 3-9 in their last 12 road games against right-handed starters.

All eyes will be on Judge as he looms just behind Roger Maris for what many believe is the legitimate record for most home runs in a season, but he may not be the only one mashing taters in this one.

Anthony Rizzo and Giancarlo Stanton have proven difficult for Pivetta to contain in his career, as they’re a combined 16-for-42 (.381) all-time against him with five home runs and 13 RBI.

The Yankee bats have woken up in a big way following a long second-half slumber, as New York has plated at least five runs in nine of its last 10 games, going 8-1 and averaging 8.4 runs per game in that span.

The Red Sox have not been nearly as effective at the plate in recent games, but it’s hard to knock the form of Bogaerts or Rafael Devers this month. The former is batting .355, while the latter is hitting .304, and they’ve combined to drive in 26 RBI.

The Over is 10-4 in the last 14 meetings between these two teams, including the first two games of this series.

The Red Sox are 0-6 in their last six games against starters with a WHIP less than 1.15. Find more MLB betting trends for Red Sox vs. Yankees

Nick Pivetta (10-11, 4.35 ERA): Pivetta has had a moderately successful September, authoring a 3.93 ERA through four starts, and he escaped with only three earned runs on his ledger over 5 1-3 innings of work against the Yankees in his last appearance against them on September 13.

Domingo German (2-3, 3.12 ERA): German has stepped back into the starting rotation following Frankie Montas’ being shuttled to the injured list. He produced four straight quality starts before heading to the bullpen and has worked 2 2-3 scoreless innings across two outings, one of which came in an “opener” role. 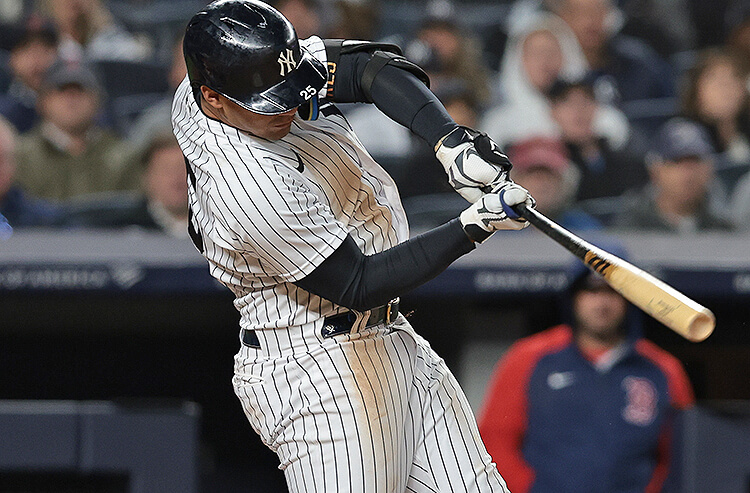 Red Sox vs Yankees Picks and Predictions: Justifying the Over Beyond Just Judge
Provided by