Red Sox vs Rays ALDS Game 1 Picks and Predictions: Sox Could Have Holes

Boston has had to play for its playoff lives the past week, and while it carries momentum into the ALDS, it's facing a better-rested, and frankly just better, team. Find out if they can dig deep for a series-opening win as we break down our Red Sox vs Rays

The American League Division Series kicks off Thursday with the first-place Tampa Bay Rays hosting the Boston Red Sox, who are fresh off a Wild Card victory over the Yankees. The Rays lead the season series 11-8, including taking seven of the 10 meetings at Tropicana Field this season.

Tampa will go with rookie left-hander Shane McClanahan while the Red Sox will counter with fellow lefty Eduardo Rodriguez. Tampa opened at -170 with the total opening at a flat 8.

Here are our free picks, predictions and MLB odds for Red Sox vs. Rays for Thursday, October 7.

Eduardo Rodriguez (13-8, 4.74 ERA): Rodriguez is not your stereotypical Game 1 starter of a divisional series, but with Boston playing do-or-die baseball last week and then playing in the Wild Card game Tuesday, this is Alex Cora’s best choice. Rodriguez pitched better away from Fenway with a 3.95 ERA on the road and was decent after the All-Star break with a 3.71 ERA across 14 second-half starts. However, the Boston starter will be off his routine as he pitched one inning (eight pitches) in relief Sunday and started (five innings) on Friday versus the Nationals. The southpaw has started four games against the Rays this season and has a 4.71 ERA with 23 hits (four HRs) allowed over 21 innings. The Rays posted a .816 OPS versus Rodriguez this season.

Shane McClanahan (10-6, 3.43 ERA): The former first-rounder has made 25 starts for the defending American League champions and pitched to a 3.43 ERA. Additionally, the hard-throwing lefty has been much better of late and carries a 2.81 ERA over his last 13 starts. He’s made three starts versus the Red Sox in 2021 with a 2.81 ERA over 16 innings with 18 punchouts. Boston has struggled to get extra bases off the rookie, with a .295 SLG percentage. McClanahan got some relief work in during last year’s postseason and although he pitched to an 8.31 ERA, that experience will be critical to his immediate success.

The Red Sox are 2-7 SU in the last nine meetings in Tampa Bay. Find more MLB betting trends for Red Sox vs. Rays.

The Tampa Bay Rays finished with the best record in the American League at 100-62, including a 52-29 SU record at home this year. This relatively unfamiliar lineup also finished second in baseball in runs per game at 5.29 and scored more than any team in baseball in the second half. This is an order that features Randy Arozarena (hit .358 in last year’s postseason), Wander Franco (.954 OPS last 30 games), Nelson Cruz (1.019 OPS in the postseason) and Austin Meadows (27 HRs and 106 RBI this season) in the two-through-five spots. If someone tells you that hitting is the Rays’ weakness, they are flat-out lying to you as this lineup should hit a weak Boston rotation hard this series.

Although Tampa starter Shane McClanahan is technically in his rookie year, the lefty made four appearances in last year’s postseason run. The southpaw gave up runs in two of his four appearances but having played in that atmosphere is huge for the Rays, especially in Game 1 where Tampa has such an advantage on the mound with Boston playing on Tuesday. The Rays were 9-4 SU in McClanahan’s last 13 starts and 1-2 SU in the three low-scoring games he had against the Red Sox this season.

The Red Sox saw plenty of McClanahan this year but hit just .239 with only Hunter Renfroe (HR) and Jose Iglesias (2B) getting an extra-base hit over 67 at-bats. Outside of Gerrit Cole, Boston batters had just three hits off of the Yankees’ bullpen in 23 at-bats Tuesday night.

Boston has scored 44 runs against the Rays over the last 10 meetings, but a 20-8 victory skews that average. Of those 10 games, the Red Sox have plated more than four runs just twice, and zero times in the three games vs. McClanahan.

The Red Sox will also get a heavy dose of the Rays’ bullpen, as McClanahan has pitched at least six innings just once in his last eight starts and hasn’t thrown more than 88 pitches in any of those starts. Kevin Cash’s bullpen led all of baseball in WAR and finished the year with a 3.24 ERA and pitched more innings than any other team in baseball. Seven of the team’s nine most-used relievers posted an ERA below 2.50 this season. This is another major advantage for the Rays, as the Sox’s bullpen situation is shaky heading into the series.

This might be the best matchup any team has in the Divisional Series as Tampa’s big sticks have already hit Rodriguez hard this year. Tampa is slashing .277/.310/.506 over 21 innings against the Boston lefty this season and most recently tagged the Game 1 starter for six runs over 3 2-3 innings at the Trop back in early September. Arozarena, Cruz, Franco and Mike Zunino all have an OPS over .800 vs. Rodriguez, with Zunino posting a 2.333 OPS over 6 ABs (HR, 3B, 2B).

We aren’t hitting the TB ML at -169, but with the Rays seemingly having an advantage at every turn, we don’t mind taking them on the run line, especially with the usage of Rodriguez. Of their nine wins last postseason  the Rays covered the run line in six of them.

In the 19 meetings this year, the Over hit 12 times. The Red Sox do hit leftys well, finished the season with the seventh-best OPS vs. LHP, hit .267 against the Rays, and scored 5.47 runs per game across the 19 meetings.

Boston comes into the series riding high, and confidence breeds good hitting. The Sox are a much better home offense, but the big sticks at the middle of the Red Sox rotation can do some damage early against a Tampa team that has been idle since Sunday.

Tampa hits Rodriguez well and with the starter having pitched five innings on Friday and throwing an inning in relief Sunday, it isn’t ideal for a pitcher you want to back for an Under. The Venezuelan starter has 10 innings of postseason experience and owns an 8.10 ERA with two homers and five walks. In his one postseason start, Game 4 of the 2018 World Series vs. the Dodgers, the left-hander gave up four runs and recorded just 17 outs.

This should be a very public-bet Over and we’re fine with jumping on the bandwagon. Both teams have insane pop in the middle of the order and Boston proved it can still slug, even without J.D. Martinez (Questionable). Tampa has seen plenty of Rodriguez and has posted solid numbers versus the league-average pitcher. 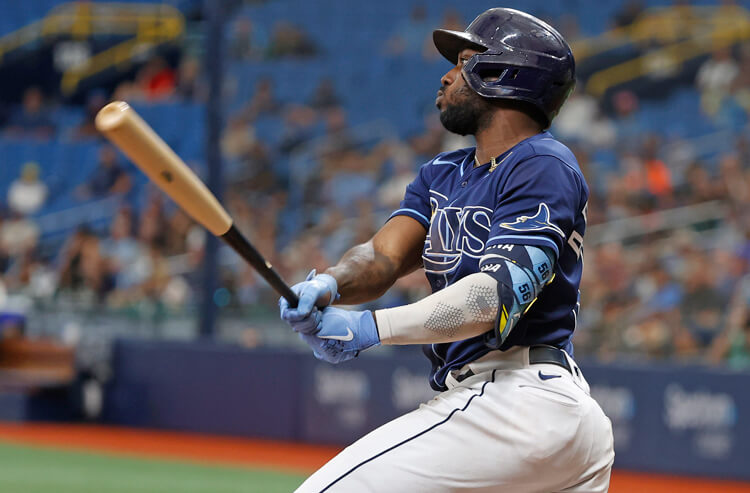 Red Sox vs Rays ALDS Game 1 Picks and Predictions: Sox Could Have Holes
Provided by