Rays vs Red Sox ALDS Game 3 Picks and Predictions: Boston Gets the Right Matchup at the Right Time

It's all square at one apiece as the Rays and Red Sox get set for Game 3 at Fenway Park. Tampa Bay has proven to be deep all season long but our picks highlight how a great matchup could swing it in Boston's favor.

With the ALDS tied up at one, the Boston Red Sox will take on the Tampa Bay Rays at Fenway Park on Sunday, October 9, at 4:07 ET. The Red Sox are coming home after an impressive Game 2 victory over the Rays, winning 14-6.

All year long, the talk had been about how great the Rays’ pitching staff was. With the Rays up 5-2 in the first inning, the Red Sox responded in a big way. What can we expect in Game 3? Find out in our free MLB betting Rays vs. Red Sox picks and predictions.

Drew Rasmussen (4-1, 2.84 ERA): The Tampa Bay Rays traded for Drew Rasmussen earlier this season. Rasmussen was a main piece in a package that sent Willy Adames to the Milwaukee Brewers. The trade has since benefitted both teams and the Rays have transformed Rasmussen into a reliable starter. Don’t expect more than five innings from Rasmussen, but what you can expect is five innings of quality. The right-hander had a 1.50 ERA in September and hasn’t pitched since September 29.

Nathan Eovaldi (11-9, 3.75 ERA): Throughout the season, Eovaldi wasn’t always consistent, finishing the regular season with a 3.75 ERA, but he’s been pitching well as of late. Despite a higher ERA than most of the aces he’s going to face in the postseason, Eovaldi has looked great when it mattered the most. On September 29, he shut down the Orioles in a pivotal game in a tight playoff race. Then in Tuesday’s Wild Card showdown against the Yankees, Eovaldi allowed one run in 4 1-3 innings with eight strikeouts and no walks. In a tied-up series, the Red Sox have to be thrilled Eovaldi is on the mound at home.

There’s nothing like facing a divisional rival in the postseason. The more times these two teams play, the greater chance each game becomes a chess match.

The difference between the Rays and every other team in the MLB is that they’re able to match up against each pitcher with players that have the best weighted splits.

For example, the Rays had to face two lefties to start postseason play. Tampa Bay’s lineup was mostly right-handed bats along with lefties, Brandon Lowe, who hits many home runs against lefties, and Kevin Kiermaier, who is basically in the Rays lineup for his defense and not for hitting. In Game 3, the Rays will finally take on a right-hander. That means we’ll get to see a left-handed heavy lineup including solid bats like Austin Meadows, Ji-Man Choi, and Joey Wendle.

The Rays are always stacked, no matter which throwing hand they’re facing. However, going up against Red Sox ace Nathan Eovaldi is going to be a challenge.

In the last 30 days, Eovaldi has a 3.16 xFIP in 32 innings of work. In that same time frame, he’s striking out 29.9 percent of batters and keeping home runs down to 0.8 per nine innings. When the Red Sox needed him the most in the last two games, Eovaldi produced and that could happen again, at home, against the Rays, where he’s held their roster to a .207 average in 156 at-bats.

On the other hand, Drew Rasmussen will take the hill for the Rays. Tampa Bay continues to pitch young starters in big games and it’s worked out all season long. Rasmussen won’t be expected to go more than five innings in this game, but he’ll be expected to throw quality innings.

In September, Rasmussen had a 1.50 ERA and threw 24 innings while holding batters to a .186 average. He also left 84.3 percent of runners on and has been good in pressure situations.

But, at the end of the day, the Red Sox lineup profiles very nicely against Rasmussen. In September, every batter in Boston’s projected lineup has a .289 wOBA or higher against righties, and that includes Xander Bogaerts and Rafael Devers, who have inflated wOBA of .446 and .435 respectively.

Give me the Red Sox in this one.

Despite 20 runs coming across the plate in Game 2, I’m expecting a much lower scoring game for Game 3. Eovaldi has looked extremely locked in and has good numbers against the Rays.

Meanwhile, I still believe the Red Sox score a couple of runs early against Rasmussen, but those runs won’t be enough to push this game Over.

As the series gets tighter and the amount of games being played gets shorter, all hands are on deck. That means every move will be made quickly so that pitchers don’t give away a game like the Rays did in Game 2. 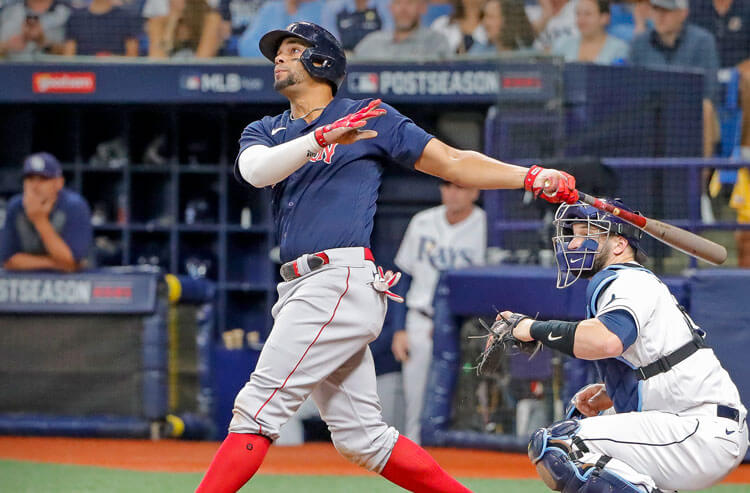 Rays vs Red Sox ALDS Game 3 Picks and Predictions: Boston Gets the Right Matchup at the Right Time
Provided by