Tonight's Rays-Guardians matchup sees Tyler Glasnow take the mound for the first time since his Tommy John surgery. He's fanned 14 of the 26 batters he's faced in his four rehab stints and we like that trend to continue in our MLB betting picks below.

Both the Cleveland Guardians and Tampa Bay Rays used their best arms in last night’s extra-inning match, which could favor the Over on a total heading south.

Triston McKenzie continues to be undervalued while the only market the books have opened for Tyler Glasnow is too long.

Find out where my best bet lies in my free MLB picks and predictions for Rays vs. Guardians.

Rays vs Guardians picks and predictions

The market could be sleeping on Tyler Glasnow tonight. He won’t have a long leash and THE BAT has him projected for just 66 pitches, but the right-hander is one of the best strikeout pitchers in baseball.

Tonight he has a tough matchup vs. one of the most difficult lineups to strike out in the Guardians, but that is priced in — the same with every opposing pitcher. He is paying +120 to top 3.5 strikeouts and if he does see 66 pitches, there is a better than 50% chance that he hits the Over.

The Guardians have the AL Central wrapped up and are locked into the No. 3 seed. They have the luxury of giving rest to some of their veterans down the stretch and Glasnow could see a weaker lineup.

McKenzie and the Guardians come in as short -125 favorites. This moneyline can be found from -120 to -130 as the addition of Tyler Glasnow to the rotation has created some uncertainty.

Glasnow is a legit ace but is making his first start in over 15 months thanks to Tommy John surgery. He has dominated across four rehab starts, striking out 14 of 26 batters but getting through five innings is unlikely for the right-hander.

He’ll give way to a bullpen that used seven pitchers yesterday while co-closer Jason Adams blew his second straight game. Considering Glasnow won’t get deep, the price seems a little long for a Cleveland team that might be sending out its No. 1 starter in Triston McKenzie.

Shane Bieber closed at -150 last night vs. Corey Kluber and I don’t see much difference in the pricing for tonight — yet books are 20 to 25 points longer today. McKenzie has been an undervalued starter all season considering he leads all Cleveland starters in WHIP (0.96) and could have a sub-3.00 ERA with a good performance tonight.

The Guardians dropped the opener last night but also out-hit Tampa 14 to 7 and had 18 at-bats with runners in scoring position but ultimately failed to cash with just four hits in those situations.

Last night’s game closed with a total of 6.5 and tonight’s game is headed in the same direction. The total opened at 6.5, juiced at -120 to the Over but has seen a 20-point swing to move to Over 6.5 (+100). I doubt this will hit 6 but both teams did dig into their bullpens last night thanks to an 11-inning match that favors the Over.

Both teams used their A-bullpens with each club using their Top-4 arms in the extended match. Combined, both clubs went 6-for-30 with RISP. They also stole a combined four bags which could also be something we see tonight as both Tampa and Cleveland sit in the Top 10 in stolen bases.

Progressive Field is one of the best pitcher-friendly parks as home runs will be suppressed but these two teams know how to manufacture runs and sit in the bottom half of the league in hits per run meaning these two clubs are not home run dependent on run production.

Rays vs Guardians trend to know

The Over is 4-0 in Guardians’ last four home games with the total set at 6.5 or lower. Find more MLB betting trends for Rays vs. Guardians

Tyler Glasnow (0-0, 0.00 ERA): Glasnow will be making his first start in over a full calendar year. He’s made four rehab starts with his latest, an eight-out, shutout performance where he struck out six. He only threw 47 pitches in that outing so he’ll have a short leash tonight. Glasnow has a career 4.04 ERA with an electric 11.3 K/9. 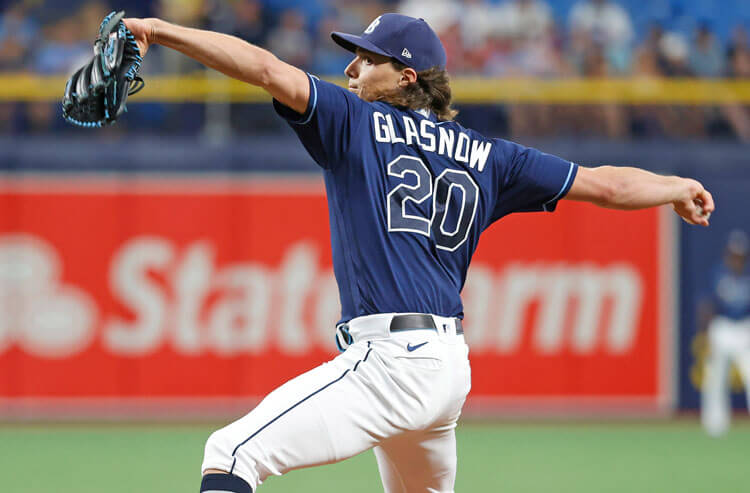