When Alek Manoah turns it over to the bullpen on Saturday, it will be trouble for the Blue Jays. In our free MLB prop bets and predictions, we're telling you how to take advantage of that and more.

The MLB season is in full swing and with it all the MLB betting markets that we’ve come to love/hate. This article will try to find some of MLB’s best props and side bets for the day and does all the heavy lifting so you don’t have to. If there’s a line on it, we’ll look into it.

Today, we’re still looking for the fallout of grip-gate, betting against a laughably bad Blue Jay bullpen and bullying the Diamondbacks who are riding a 15-game losing streak.

Check out our favorite MLB free prop bets and predictions for Saturday, June 19, 2021.

Grip enhancement has been a big topic in the MLB of late and whether you agree with the league or side with the pitchers, there are angles from a betting standpoint here that we can try to exploit. First, let's look at the performances of pitchers over the last 30 days and try to find a struggling pitcher who stands out.

We can all agree that Jake Arrieta’s better days are behind him. He owns a 5.14 ERA this year, and his ERA has increased each season since 2015. But over the last 30 days, the Chicago starter is sporting a 6.53 ERA with a 1.79 WHIP across 20-plus innings of work. His walks are up (12 BB over that stretch) which indicates a slight loss of command. That may be entirely coincidental, but there is a good chance the veteran pitcher has had to cut back on some kind of edge with the league cracking down.

The Cubs will face a Miami team Saturday that is scoring just 3.91 runs per game on the year but hung a 10-run performance yesterday in the opener after knocking Chicago starter Zach Davies around for eight runs on seven hits over six innings. Arrieta hasn’t seen the sixth inning in any of his last six starts and has also allowed four or more runs in four of his last six games and five of his last seven.

Trusting the Miami offense to help us out isn’t always an easy choice, but with yesterday’s hot bats hopefully carrying over into today and Arrieta giving away bases for free, we’re riding the plus-money prop on the Over 3.5 earned runs for the Chicago starter.

The Toronto Blue Jays bullpen is bad, like, really bad. Their A-bullpen is a disaster, and their B-bullpen shouldn’t even be rostered. The Blue Jays’ relievers allowed another crooked number just last night — a five-run outing that turned a one-run Baltimore lead into a six-run win.

Over the last 30 days, the Toronto bullpen is 2-11 with two saves, a 5.38 ERA and a -1.1 WAR, which is the worst in the league and twice as bad as the next-worst team. Sometimes in the prop world, you find the mark and then you find the market.

Looking at the Orioles/Blue Jays market there are few bets we can correlate to a bad Blue Jays bullpen. Some books have a Highest Scoring Period which pits the game’s first five innings versus the remaining. This market pays extremely well for the rest of the game (from the sixth inning and beyond) and comes with a price of +165 for TOR/BAL. It usually is a three-way market, so a tie is a loss.

The Blue Birds will be sending rookie pitcher Alek Manoah to the mound. The right-hander has pitched well but there are few things to like from a short-outing perspective. First, the youngster hasn’t pitched more than six innings so the Toronto bullpen should be entering this game in the sixth or seventh inning. Secondly, Manoah hasn’t shown his best stuff in his recent outings. He generated 11 whiffs in his last start and has just nine strikeouts over his last 11 innings. The starter is no threat to go deep.

That leaves the Toronto bullpen to get lit up for hopefully three solid innings and with Dean Kremer (0-6, 6.65 ERA) starting for Baltimore, the Jays should have built up a little lead heading into the late frames that they can squander away.

Bullying is not cool by any means unless it’s against the Arizona Diamondbacks. They lost their 20th-straight road game on Thursday then returned home to get blanked 3-0 by the Dodgers last night. Over the last 30 days, the last place Arizona team has the NL’s second-worst wRC+ thanks to a league-worst 18 home runs. The D-backs are one of five MLB teams averaging under 1.00 home runs per game and the struggling club has just one long ball across their last three games. Now they have to face one of the best pitchers in L.A.’s Walker Buehler.

Buehler and his perfect 6-0 record have not allowed a run in over 14 innings and have given up just seven over his last two starts. The young right-hander has a sub-1.00 WHIP to go along with a 2.38 ERA. He has allowed more than two runs in just three of his 13 starts heading into Saturday’s nightcap.

Losing has infected the Arizona locker room and throwing up a donut at home in the first game following a historically bad road trip shows us this team is not ready to push through the noise. The Diamondbacks have lost 15 straight games and have scored more than three runs five times in their last 13 matches. Facing a hot Beuhler is not the answer this team needs to snap out of its funk. We’re hitting the home side’s team total Under. 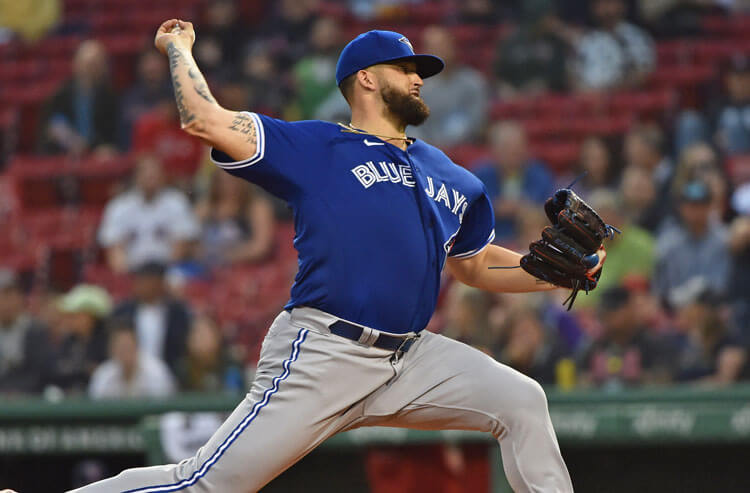