The Guardians don't strike out often, but Luis Castillo got to them recently, and every indication is that it will happen again tonight. Find out why the Mariners starter should go deep again and ace our MLB betting picks.

Castillo owned the Guardians in a meeting last week and with the books already adjusting his strikeout props due to Cleveland’s low K%, bettors are getting great plus-money odds on a pitcher who has one of the longest leashes in baseball. See my best bet for Mariners vs. Guardians.

Mariners vs Guardians picks and predictions

Since coming over from the Reds, Luis Castillo has thrown 31 2-3 innings and struck out 39 batters. He’s walked just eight hitters and owns a 1.07 WHIP.

He saw the Guardians in his last start and went six innings and sat down 10 batters. Tonight, it will be the Guardians’ turn to adjust, and considering that Castillo had 20 strikes swinging and 20 strikes looking over his 115 pitches in that start, Cleveland is nowhere near Castillo’s stuff. The Cleveland offense has also been shut out in three of its last four games.

The Seattle starter also pounding the zone in that game and threw 85 of his 115 for strikes. He’ll have an incredible leash as he has topped 100 pitches in four of his five starts with the Mariners and is averaging 105.8 pitches per start.

Tonight, the books have Castillo’s strikeout prop at 5.5 (+120 to the Over) which is a number he has topped in four of his five games with Seattle and is 11-1 to the Over in his last 12 starts.

Castillo’s total usually sits at 6.5 but closed at 5.5 in his last start vs. the Guardians. The low total is thanks to the Guardians striking out at the lowest rate in baseball (18.6%) but Castillo’s 40 called strikes and whiffs — which was a season-high — vs. the Guardians last Saturday shows me that performance was no fluke.

The books have already adjusted the strikeout total because of the Guardians K%, so saying that Cleveland whiffs at a low rate is already baked into the price. Now I’m getting a pitcher who is throwing over 67% of his pitches for strikes with a 31% CSW rate at plus money. All Castillo needs to do is get a punchout per inning as he's likely to go at least 18 innings with a total out market at 18.5.

The Mariners come into Progressive Field as a decent -145 road favorite in tonight’s season opener after opening at -135. Seattle enters tonight in better form after sweeping the Tigers and taking three of four vs. the Guardians in the series before that. It’s not often we see a division leader open a series as decent underdogs but form and starting pitching are the big reason.

The Guardians didn’t show any offense in their series with the Orioles, scoring just five runs in the three-game set while getting shut out in two of those matches. This is an offense that has scored zero runs in three of its last four matches and has plated two or fewer runs in seven of its last 10.

The Mariners scored 21 runs in the three-game series vs. the Tigers and launched seven long balls. This is a top-heavy lineup but has veteran bats and pop off the bench with Jake Lamb and Jesse Winker.

The biggest reason for this ML is the starting pitching. Luis Castillo has been great all year and is an important piece of this loaded rotation. He has one of the longest leashes in baseball and owned the Guardians in his last start with 40 called strikes and whiffs.

On the other side, Zach Plesac is a borderline average MLB starter. Since July, the right-hander has recorded more than 15 outs just three times over nine starts. The Mariners took him deep three times last week and Cleveland is 9-14 SU over his 23 games.

Both teams have Top 10 bullpens and the important arms are all available tonight.

This same starting pitching matchup closed with the Mariners at -175 on the moneyline last week and although the Mariners are the better team, tonight’s -145 ML doesn’t line up with last week’s price and could be too long on the home side tonight as there is roughly a 60-point swing in a change of venues. However, some books did close the previous matchup at -210 which makes tonight's line more accurate.

Tonight’s total opened at 7.5 and hasn’t moved much. With two elite bullpens on the backside, Over bettors will be hoping for early runs as the Guardians’ relievers have a 0.63 ERA over the last two weeks while the Mariners are no slouch either with a 2.39 ERA which ranks third.

Castillo was masterful vs. the Guardians and made a low strikeout team look silly at the dish. He will likely go 100 pitches and doesn’t have to go seven innings to be effective as the bullpen is solid and rested after a breeze of a series vs. the Tigers.

Plesac gave up three homers in his last start vs. Seattle but those were the only three hits he gave up over 21 total outs. The Cleveland starter will also be aided by one of the best pitcher-friendly parks on the slate tonight. For a hard-hit pitcher, Plesac has still been profitable to the Under with a 10-13 O/U mark on the season.

It’s tough to expect runs with this Cleveland offense that has scored in just one of its last four games and sits in the Bottom 10 in run production on the season.

The Under went 3-1 in the four-game meeting last week between the two clubs but the only Over was the Castillo/Plesac matchup that closed at 7.

Luis Castillo (5-5, 2.85 ERA): Castillo will be making his sixth start for the Mariners tonight and owns a 2.84 ERA with a 1.07 WHIP. He struck out 10 Guardians last Saturday in a six-inning outing where he allowed a single run on four hits. He is missing a ton of bats, is averaging 6.8 strikeouts per start, and has topped 100 pitches in 13 of his 19 starts. He has one of the longest leashes in baseball.

Zach Plesac (3-11, 4.39 ERA): Plesac has been up and down this season and comes into tonight’s game with a 5.40 ERA over his last seven starts. He saw the Mariners last week and allowed three runs over seven innings with all three runs coming via the long ball. Plesac sits in the low-90s with his fastball, misses bats at a Bottom 25% rate, and gets hit hard with a HardHit% of 42.6% which sits in the Bottom 16% of baseball.

The Mariners are 6-0 SU in their last six games during Game 1 of a series. Find more MLB betting trends for Mariners vs. Guardians 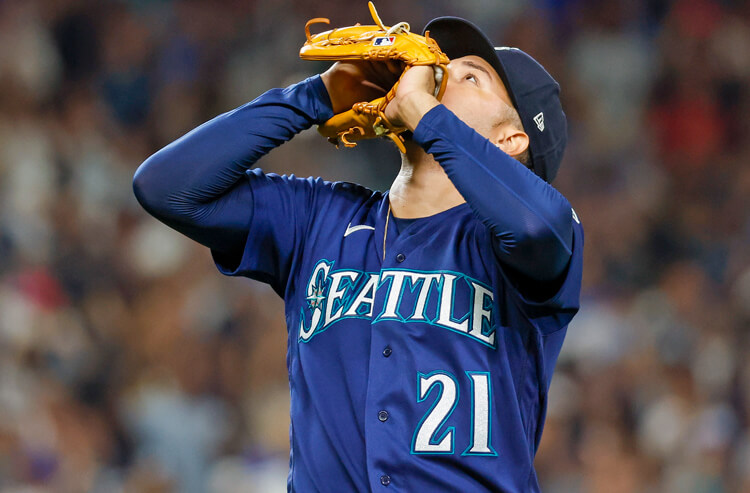 Mariners vs Guardians Picks and Predictions: Cleveland Continues to Chase Castillo
Provided by