Giants vs Dodgers Picks and Predictions: Back Urias' Excellence

The Dodgers have been in stellar form over the past few weeks, and send a totally underappreciated pitcher to the mound tonight. Julio Urias usually dominates, and we see no reason to fade him with Saturday's MLB betting picks.

The Los Angeles Dodgers (61-30) have picked up where they left off prior to the All-Star break, winning the first two wins in their four-game set with the San Francisco Giants (48-44), and now winners of 17 of their last 19.

With the two losses since the break, the Giants have fallen out of the final National League Wild Card spot and need a win on Saturday night to prevent further slippage and to give themselves a chance to tie up the series come Sunday. Can the Giants stop the bleeding or will the scalding-hot Dodgers continue their hot streak?

Continue reading for free MLB picks and predictions for the Giants vs Dodgers matchup on Saturday, July 23rd.

Alex Wood (6-7, 4.20 ERA): Following a bounceback campaign in 2021 in which he pitched to a 3.83 ERA after posting 5.80 and 6.39 figures in the two seasons prior, Wood has regressed a tad. But to his credit, the 31-year-old lefty ended June with a 5.03 ERA and has since posted three consecutive quality outings, allowing just one earned run total across the three while striking out 19 batters in the process.

Julio Urias (8-6, 2.89 ERA): Urias has shown nothing but excellence in four seasons now, notching an ERA above 3.00 just once during that time - his 3.27 ERA finish in 2020. That includes his 2.89 ERA this year to date, a product of going over three earned runs just three times in his 18 starts thus far. Urias allowed just one earned run in seven innings of work against the Angels in his last start prior to the All-Star break.

The Dodgers have won 17 of their last 19 games, with 14 of those wins being by more than a run. Find more MLB betting trends for Giants vs. Dodgers

Giants vs Dodgers picks and predictions

In the world of sports, the word "underrated" gets thrown around so much that it has essentially lost all weight. But make no mistake about it, Julio Urias has been one of baseball's most underrated arms for many years now despite playing on one of the league's premier teams.

Following several strong but unheralded seasons, last year Urias posted a 20-3 record, leading the league in both wins and win percentage (.870) while putting up a 2.96 ERA and 1.02 WHIP. He was not named to the All-Star Game and he finished seventh (yes, seventh) in the National League Cy Young voting.

99% of pitchers that make the major leagues don't have a single stretch of play as good as Urias' in the last four seasons. And the best part? He's only 25, despite this being his seventh season. There is a lot of runway left for Urias when looking at the bigger picture, but he can build on this stretch as early as Saturday night when he takes the mound against the Giants.

In 179 combined plate appearances against these Giants batters, Urias has allowed just a .234 batting average and has struck out batters an enormous 32.1% of the time. Contrast that to Alex Wood, who will take the mound opposite of him on Saturday.

Yes, the odds are a tad bit long, but they speak for themselves — as does the Dodgers' current 19-game stretch in which they've lost just two games.

Coming out of the All-Star break, the Dodgers have continued their elevated run production, plating 14 runs across the first two games of the series. As a result, they’ve now gone Over the total in five of the last eight.

And although the Giants put up just one run last night, their bats have also been rather hot as of late, averaging 5.9 runs in the 10 games prior to Friday. If they can plate even just a handful of runs, the Dodgers likely can pull more than enough weight to get over Saturday's number.

Speaking of that number, the total has moved down from its 8.5 opening with some books showing a juiced Over on the 7.5. It'd be unwise to chase a full run of steam, and given how good each team's bats have been, it's the better side anyways.

The third game of this four-game set between these two NL West foes has a lot at stake. The Giants are in desperate need of a win for a multitude of reasons, whether now being on the outside looking in on the Wild Card race, or also just the simple fact that a win tonight gives them a chance to at least tie the series with their rivals.

Wood takes on his former squad — a team for which he pitched to a 16-3 record in 2017, a campaign in which he was named to his lone All-Star Game. He played a pivotal role in getting the Dodgers to the 2017 World Series, arguably a pre-emptive and necessary step along the way to their eventual 2020 World Series win.

And across from him is Julio Urias, who despite his now four seasons of prime play, does not have the recognition and accolades he deserves. And tonight, he gets to pitch to a lineup full of batters he has taken care of rather efficiently in an appreciably large sample.

It’s somewhat fitting that Urias will take the mound on Saturday night in Dodger Stadium on national television (FOX), the same setting to the All-Star game earlier this week. A game that was a celebration of excellence that he was once again not invited to take part in. But Urias can display his own excellence tonight, and he'll do exactly that. 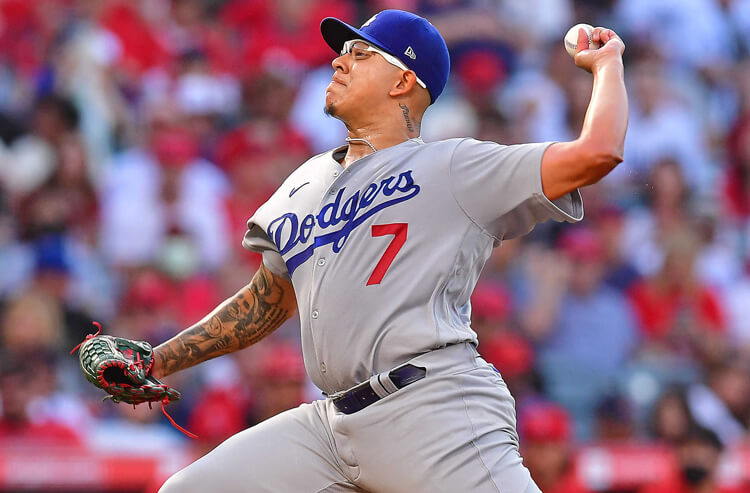 Giants vs Dodgers Picks and Predictions: Back Urias' Excellence
Provided by