This week's edition of Sunday Night Baseball prop picks breaks down the pitching matchup between Carlos Rodon and Adam Wainwright and takes a bit of a flier on one of the Cardinals' best bats.

Another Sunday means another edition of our Sunday Night Baseball player prop picks, where we preview our three favorite prop bets for the final baseball game of the week.

Tonight, we’re focusing on a meeting between the San Francisco Giants and St. Louis Cardinals at Busch Stadium, which we already analyzed from a more traditional betting perspective in our Giants vs. Cardinals picks and predictions.

Let’s ditch the moneylines, sides, and totals in this one and try to cash in a little on some more obscure plays!

MLB props for Giants vs Cardinals

Picks made on 5/15/2022 at 12:00 p.m. ET.
The odds widgets below represent the best odds currently available for each betting market at regulated sportsbooks.
Click on each pick to jump to the full analysis.

Rodon has allowed two or fewer earned runs in each of his starts this season, and he has also struck out eight or more batters in five of his six starts this year.

That’s all he’d need to do in order to cash in on his strikeout prop tonight, but there is a reason the oddsmakers are offering plus-money on the Over on his strikeouts. It seems like a trap play from Vegas.

The lefty really has been as advertised since joining San Francisco, where he is currently in the midst of the best season of his career. Rodon is, however, a left-handed pitcher and is now facing a St. Louis team that really can do damage against lefties.

St. Louis is currently fifth in the league at .256. The Cardinals also have the fifth-lowest strikeout rate against lefties this year, so they should be able to avoid being the next team that Rodon reaches double-digit strikeouts against. For good measure, the Cardinals are also second in MLB in on-base plus slugging against lefties, which shows you what this lineup is capable of against the right southpaw.

Rodon obviously has some of the best swing-and-miss stuff in the league, but the Cardinals have a lot of righty bats that enjoy seeing the ball against lefties. They should be able to turn in a game with five or more hits against Rodon, even in a game with a really low total.

Arenado is having a great year for the Cardinals, batting .311 with seven homers and 27 RBI. That puts him on pace for 34 homers and 133 RBI, and that would be exactly what St. Louis signed up for when it traded for the former Rockies superstar.

Arenado has also hit 12 doubles early on in the year, and he comes into this game having hit one in three of his last four. Now, we’re backing him to do it again tonight.

While it won’t be easy for Arenado to make clean contact against Rodon, he is one of the best hitters in all of baseball and the Cardinals will be counting on him to come through in what should be a low-scoring game.

Overall, it’s just hard to lay off of Arenado to come through with a big hit against the Giants tonight, as you can get this play at +400.

No matter what you lose on the game, that type of win would make it a profitable Sunday Night Baseball with odds too good to pass up.

Adam's age is just a number

The last time Wainwright started a home game against the Giants, he struck out seven batters in six innings back on July 16, 2021. The righty doesn’t always rack up strikeouts, but he is still a really good starting pitcher and he likes the big stage.

Tonight’s meeting with the Giants gives him the opportunity to pitch on national television, and Wainwright knows that he needs to be good in order for his team to have a chance to win. He has to go out there and outduel Rodon, who is having the best season of his career. However, these are the situations that bring the best out of Wainwright.

Also, this strikeout total just isn’t very high. Wainwright has already had three starts this year in which he has had at least six strikeouts, so five is certainly doable — especially against a Giants offense that can occasionally go extremely cold.

Did you know that if you played today’s Sunday Night Baseball props as a parlay, you could win $xx.xx on a $10 bet? 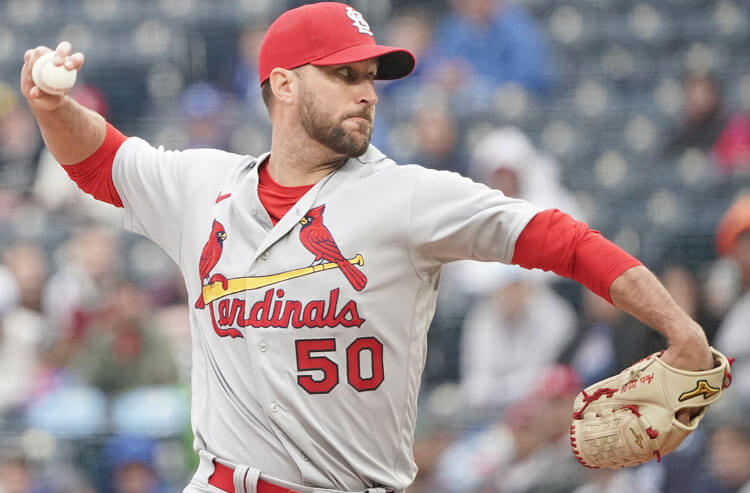