The Dodgers dropped Game 1 of this series but will send Julio Urias and his 20-3 record to the mound for Game 2. Can L.A. back Urias enough to knock off the Giants and level the series? Find out with our MLB betting picks and predictions.

The San Francisco Giants walked away with a 4-0 victory over the Los Angeles Dodgers in yesterday’s opener, as the Dodgers’ bats had no answer for starter Logan Webb.

The Giants opened at -105 on the ML in MLB betting for Game 2, while the total opened at 7 and is titled to the Over.

Here are our free picks, predictions and MLB odds for Dodgers vs. Giants for Saturday, October  9.

Kevin Gausman (14-6, 2.81 ERA): Gausman set career-bests in ERA and WHIP in what was his eighth big league season. The Giants went 21-12 SU over his 33 starts this season but hasn’t been his best at Oracle Park with a 3.44 ERA, which is a full run higher than his road ERA. His fine numbers were also built on the back of an insanely good first half (1.72 ERA) and the second half hasn’t been as good to the right-hander as he has a 4.42 ERA and 12 homers over 77 innings. He’s seen the Dodgers three times this year and owns a 3.31 ERA but gave up three HRs over 14 innings.

Dodgers: Max Muncy 1B (Out).
Giants: Brandon Belt 1B (Out).
Find our latest MLB injury reports.

The Under is 4-1 in the last five meetings in San Francisco between the Giants and Dodgers. Find more MLB betting trends for Dodgers vs. Giants.

The L.A. bats have started the playoffs cold, going 12 for 63 (.190). The Dodgers didn't get a runner into scoring position until the sixth inning in last night’s opener. But luckily for L.A., Logan Webb won’t be on the bump Saturday night and instead, the Dodgers will see right-hander Kevin Gausman, who has been fading in the second half of the year after a stellar first three months of the season.

Since the calendar turned to July, the Giants are just 10-7 SU in Gausman’s starts and the veteran has a 4.42 ERA and a .781 OPS against, which is below the league average. Gausman has faced this lineup three times and has allowed five runs over his most recent two starts which went just eight innings (three HRs).

Gausman gives this L.A offense a chance to wake up, as some important bats in this lineup have had success off the SF starter. Corey Seager (.429), Chris Taylor (.385), Justin Turner (.375), Trea Turner (.333), and Mookie Betts (.327) all have career BAs over .300 versus Gausman, while Turner and Taylor have taken him deep. If the Dodgers can scratch a couple of runs off of Gausman before Gabe Kapler goes to his elite bullpen, starter Julio Urias and the Dodgers’ equally elite pen could hold the fort.

All Urias has done is put his team in a position to win every start, as the Dodgers are 26-6 SU when he gets the ball, including winning in each of his last 11 starts dating back to July. Urias has made three starts at Oracle Park this year and has posted a 2.06 ERA and incredibly hasn’t walked a batter over 17 innings there while striking out 23. There is a case that Urias is the best pitcher on this rotation.

Not sold on the Dodgers yet? Urias has plenty of experience in the postseason with a 2.79 ERA over 38-plus innings. He was unhittable in last year’s playoff run throwing 23 innings and allowing just 11 hits and three runs. Gausman saw two innings of relief versus the Dodgers with Atlanta in the NLDS last year and gave up two runs on two hits and two walks with a homer over two innings. The Dodgers have a big advantage on the mound Saturday.

Getting LAD at -107 on the ML is a very rare occurrence and the best price we’ve seen since June 23. These are two evenly built teams with lineups, bullpens, and defense being close to a wash. The real advantage here is on the mound and that favors the visitors.

Yesterday’s match opened at 7.5 and closed at 7. Taking the Over on any number with these two bullpens is risky business, as they finished the season in the Top 2 spots in bullpen ERA. All four runs in Game 1 were scored with the long ball and we don’t see Urias giving up deep damage. Even if he does, his command is so on point that getting anything other than a solo shot will be a lot to ask. If Gausman struggles out of the gate, don’t be surprised if Kapler goes to a rested bullpen that has pitched just five outs since Sunday.

The defense last night should also deter bettors from hitting the Over button. Both teams finished in the Top-11 in defensive runs saved and both infields showed they can erase the pressure with a well-timed double-play ball. This is also the NL, where they like giving away outs at a much higher rate than the AL.

Urias went 1-7 O/U in his eight most previous starts while his last three starts against the Giants also comfortably hit the Under. The Giants are also 3-7 O/U in their last 10. This game will not get out of hand as starters are always on a short leash in the playoffs and both bullpens are elite. Neither offense showed much last night with just 12 combined hits. 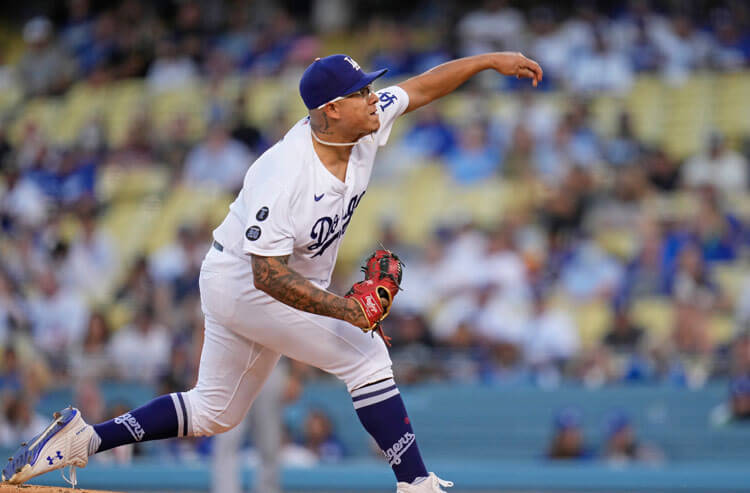