Now getting the run support he needs, Julio Urias has racked up wins in eight straight starts. Behind another gem in a pitcher-friendly park, our MLB betting picks are expecting the Dodgers to cruise vs. the reeling San Franciso Giants.

The Los Angeles Dodgers didn’t have to make many moves at the deadline because this is the best team in baseball.

However, that’s no secret and bettors usually need to pay a big tax to ride the LAD moneyline but tonight at Oracle Park vs. the San Francisco Giants, -170 might not be short enough.

Find out where tonight’s value lies in my free MLB picks and predictions for Dodgers vs. Giants.

The Dodgers opened as -155 road favorites but jumped to -170 overnight. The total sits at 7.5 and leans to the Under at the pitcher-friendly park. The Dodgers have taken the first two games of the series as -135 and -150 favorites and have scored 17 runs in the series.

Julio Urias (10-6, 2.71 ERA): Urias will be making his 21st start of the season tonight at Oracle Park. He’s been one of the best pitchers in the rotation and owns a sub-1.00 WHIP thanks to elite command. He’s allowed just three earned runs over his last 20 innings while the Dodgers have won eight straight starts when he toes the rubber. Urias was a -230 road favorite in Colorado his last time out.

Alex Cobb (3-5, 4.06 ERA): Cobb is coming off one of his best starts of the season as he went six innings, gave up one run on three hits, and struck out 11. However, the start prior to that, the right-hander gave up four runs to the Dodgers over 5+ innings in a losing effort. Cobb has made 16 starts this season and owned a 5.73 ERA after his first eight turns. Cobb is also one of the best groundball pitchers in baseball with a 62% groundball rate. He’s a much better pitcher at home with a 2.86 ERA and hitters hitting .226.

The Under is 5-0 in Cobb's last five home starts. Find more MLB betting trends for Dodgers vs. Giants

Overnight bettors took advantage of a long line on the Dodgers when they hit them at the opening price of -155 which has driven this line as high as -175 at some books. I think there is still a little meat on the bone here for those getting to it late.

Julio Urias wasn’t getting any run support early in the season despite solid outings. The Dodgers were 4-9 straight up over his first 13 starts. Things have certainly changed as the bats are now supporting the lefty with the Dodgers winning eight straight Urias starts.

Urias was a -175 home favorite versus the Giants just two starts ago where L.A. walked away with a 4-2 victory after Urias blanked the Giants over six innings of two-hit ball. That price was way off considering he was -230 in Colorado for his last start.

Considering the Giants had most of their players on the trade block yesterday and have seemingly quit on a playoff run, it’s tough to back a club that traded away Darrin Ruff while Joc Pederson, Brandon Belt, Evan Longoria, and Wilmer Flores were all speculative trade chips. The rumors might have had some effect on the team as they have been outscored 17-7 so far in the series.

Urias has also owned the Giants over his career. Across 94 total innings vs. the divisional foe, Urias has a shiny 2.30 ERA including 12 shutout innings this season over two meetings.

The Dodgers could also be getting some offensive support with the call-up of Miguel Vargas with Justin Turner hitting the IL. Vargas is one of baseball’s top third-base prospects and is slashing .291/.382/.497 in Triple-A this season. This is already a loaded offense that will also have the help of a rejuvenated Joey Gallo who came over from New York yesterday.

Oracle park will certainly aid the pitchers today but Urias, who is a flyball pitcher, will have the biggest advantage compared to the groundball-inducing Cobb. I’d play the Dodgers up to -185 or -190 on the moneyline but I'm rolling with the better pitcher, bullpen, and offense on the run line.

Urias has literally shut down the Giants this season over two starts where he has allowed zero runs, five hits, two walks, and 15 strikeouts over 12 innings. Give this lefty a park that is suppressing home runs by 26% today thanks to temperatures in the high-50s, and he might be unstoppable. He also gets to hand things over to one of the best bullpens in baseball.

Cobb can get hit around, but most of his stuff stays in the park and is hit on the ground. Only two other pitchers in baseball have a better groundball rate than Cobb who has hit the Under in five straight home starts.

The L.A. bullpen has been suffocating as well in the series as it has totaled nine innings and has allowed just one run on two hits, zero walks, and six punchouts. The Giants’ best arms will be available today as back-to-back days playing from behind have given their A-pen some rest.

With Urias’ track record vs. the Giants, the park, and the bullpen factors, I’m hitting this Under 7.5 with some confidence and wouldn’t blame anyone for doubling down and adding some Giants team total Under if you can find it at 3.

THE BAT has Urias projected for 92 pitches today and considering this is a lefty that has topped 95 pitches just once in 20 starts this season, that sounds like a bang-on number. He will be effective today but thanks to some super-efficient outings of late, his markets have swung too far in my opinion.

His current strikeout prop is at a robust 6.5 and considering he is less than a K/9 pitcher and projected to get just 18 outs, seven punchouts is a lot. In the two games vs. the Giants this season, Urias has failed to get even six despite going six innings in each start.

Urias can use the park to his advantage and his flyballs should stay in the yard while San Francisco sits in the bottom half of the league in strikeout percentage.

We think Urias can cruise tonight but does so without needing to strike many out. He has just nine swings and misses over his last two starts with one of those games coming against the Giants. 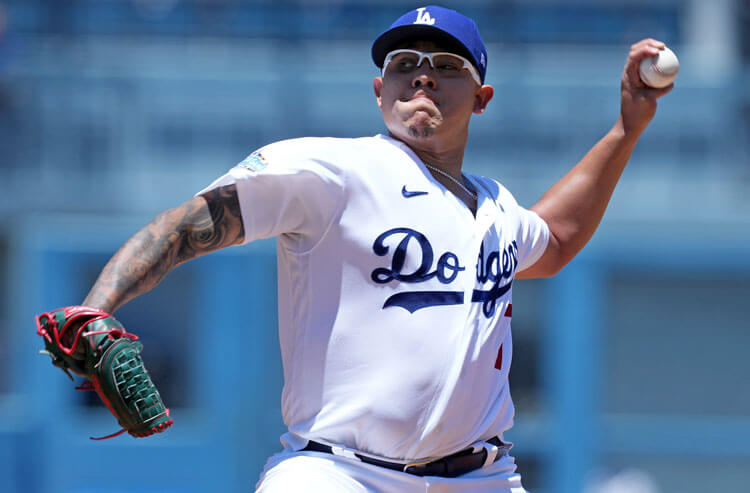