This week's edition of Sunday Night Baseball props targets a couple of Chicago Cubs hitters — Nico Hoerner and Patrick Wisdom — primed for a knock against Carlos Rodon and the Giants. We break it all down below.

The Chicago Cubs will try to salvage a series split when they take on the San Francisco Giants at Oracle Park on Sunday night.

After dropping seven in a row to begin the unofficial second half of the season, the Giants have taken two of three from the Cubs this weekend. Carlos Rodon, who’s regressed in July following a wonderful first three months of the campaign, will try to outduel Adrian Sampson in this spot.

We’ve taken a deep dive into the litany of available player props for this standalone contest and have selected some sides that bettors will not want to overlook. We’ll highlight a potent lineup combination for Chicago, as well as San Fran’s most consistent slugger during an overall team batting slump.

MLB props for Padres vs Mets

Picks made on 7/31/2022 at 12:30 p.m. ET.
The odds widgets below represent the best odds currently available for each betting market at regulated sportsbooks.
Click on each pick to jump to the full analysis.

No bull, Hoerner should get a hit

Nico Hoerner has gotten himself on base three times via the walk through 12 plate appearances this weekend, but he’s been held out of the hit column by the Giants’ pitching staff in this series. That seems due to change Sunday night.

The California native has been consistently hitting in front of Patrick Wisdom (more on him later) since the season’s second half got started, and that should afford him some good pitches to see from Carlos Rodon, who’s certainly been vulnerable over his last two starts. The San Fran southpaw has allowed 10 runs on nine hits and four walks over his last 11 innings on the mound.

Hoerner is hitting .314 against lefties this season, so he could take advantage of some soft offerings from Rodon if the Giants’ ace is off his game once more.

Since we like Hoerner to get a hit, it’s tempting to lean on Wisdom to drive him in and record an RBI, but the listed price on the slugging third baseman to simply get a hit here is much too tempting to pass up.

Wisdom has been a consistent contributor for the Cubs of late too, gathering at least one hit in eight of his last 10 contests.

Much like Hoerner, if Wisdom doesn’t do damage against Rodon, they’ll both have their chance to attack a generous Giants bullpen that’s 29th by ERA in the month of July (7.59).

It’s been tough sledding for San Francisco since the All-Star break, as they’ve lost eight of their last 10 tilts, plating just 30 total runs. The Giants are batting .222 as a team in July, but Wilmer Flores has been unperturbed at the plate as his squad struggles around him. Let’s back him to grab two bases or more on Sunday night.

Flores faces a fellow right-hander in Adrian Sampson on the hill, but the Venezuela native has reverse splits in 2022, batting .258 against orthodox hurlers, and .228 against portsiders. Of Flores’ 59 hits against righties this year, 24 have gone for extra bases, helping contribute to a solid .779 OPS.

Flores has seven hits over his last 27 at-bats overall, with five going for extra bases. That includes the two-run homer he hit in Friday’s defeat to Chicago, part of a three-hit affair for him.

Did you know that if you played today’s Sunday Night Baseball props as a parlay, you could win $56.43 on a $10 bet? 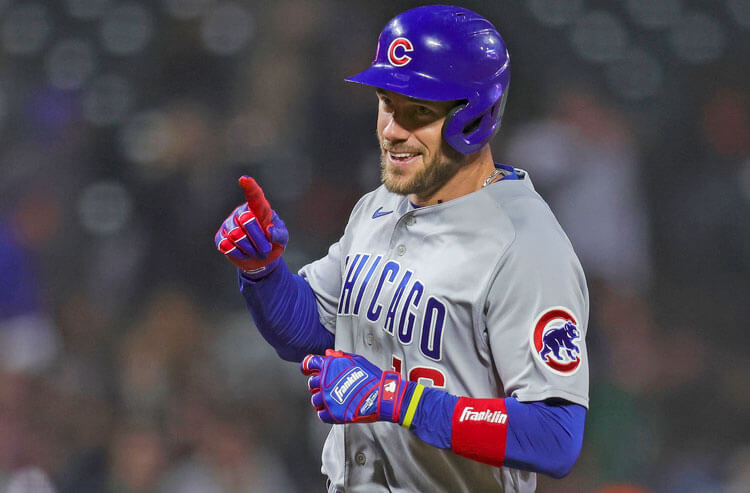