With a stellar Carlos Rodon and an underrated Adrian Sampson toeing the hill for the Giants and Cubs, our MLB betting picks and predictions are targeting the Under as our best bet — even against the slim 7.5-run total.

Sunday Night Baseball features a matchup between two teams that have won a World Series in the last decade but have stumbled in 2022.

The San Francisco Giants have taken two of the first three games in this series but will need to make up more ground as they’re currently four games back in the NL Wild Card standings.

The Chicago Cubs have won seven of their last 10 games to breathe some life into what’s been a down season.

Who will take the fourth game of the series? Check out our MLB picks and predictions for the Chicago Cubs vs. San Francisco Giants to find out.

The Giants opened as -185 favorites at home. Depending on the book, they now reside between -179 and -195 favorites as the market is expecting them to pull off the win. The total opened at 7.5 across all books and has not moved.

Adrian Sampson (0-1, 3.20 ERA): This will mark Sampson’s seventh start and ninth appearance overall. He’s still seeking his first win as he’s factored into only one decision, with that being a loss. He’s been a solid option for Chicago over the last two seasons since leaving the KBO. His 3.20 ERA is solid and his 3.81 xERA and 3.48 FIP are encouraging. He hardly strikes out any batters (16% strikeout rate) and thrives off limiting hard contact, evidenced by a 4.3% barrel rate.

Carlos Rodon (8-6, 3.18 ERA): Rodon hasn’t been in peak form lately, allowing 10 earned runs across his last two outings. His season-long stats are superb, highlighted by a 2.88 xERA, 2.41 FIP, and 31.4% strikeout rate. It’s not often you see a starting pitcher whose strikeout rate is nearly doubly that of the opposing starter's, but that’s the case in this matchup. He’ll look to regain his earlier form that saw him allow one earned run or less in six of seven starts from June 12 through July 14.

The Under is 6-1 in the Cubs’ last seven games against a left-handed starting pitcher. Find more MLB betting trends for Cubs vs. Giants

The Giants are the rightful favorite in this matchup on Sunday Night Baseball.

Carlos Rodon has been one of the game’s best pitchers over the last two seasons as he’s found a home in San Francisco in 2022. He had a breakout party last year with the Cubs, going 13-5 with a 2.37 ERA and 2.68 xERA.

It looked like he was once pace to match or exceed those numbers this season, but he’s allowed 10 earned runs over his last two starts to bump his ERA up to 3.18. His season-long xERA of 2.88 indicated that he’s still a quality pitcher and that this is a prime bounceback spot.

The Cubs may have won seven of the last 10 games, but they simply aren’t a very good team. In the month of July, their lineup ranks 23rd in OPS, 23rd in wOBA, and 23rd in wRC+. This is an exploitable lineup that Rodon should be able to handle.

The Giants are 5-1 in their last six home games and are 28-23 at Oracle Park this season. Rodon loves pitching in the confines of his home park and has a 2.05 ERA at home this season.

San Francisco is 5-1 in the last six meetings with Chicago, so they’ve had success in this series. The Cubs have had a rough time against the NL West, going 8-24 against the division.

I expect Rodon to get back on track with a solid outing on Sunday Night Baseball.

Despite his recent struggles, he still has a 2.88 xERA and a 3.2% barrel rate. Those are elite numbers, as is his 31.4% strikeout right which should play well against a Cubs lineup that strikes out a lot against southpaws.

The Under is 10-8 in Giants games when Rodon is pitching. I forecast to have success in this matchup against the Cubs, who are 6-1 to the Under in their last seven games against a left-handed starter.

The Under has been a good bet at Oracle park lately, cashing in five of the Giants’ last seven home games.

On the other side of things, Adrian Sampson is a decent starting pitcher who doesn’t get enough credit. His 3.20 ERA and 3.48 FIP are both fine. Even though he doesn’t strike out many batters, he manages to limit the damage with a 4.3% barrel rate.

The Under is 4-1 in the Giants’ last five games against a right-handed starting pitcher. They showed a little life in this series and grabbed a 5-4 win yesterday, but the Under is 10-2-1 in their last 13 games when scoring five or more runs in their previous game.

I’m siding with the Under in this contest.

I was looking to play Rodon’s strikeout prop here, but it’s listed at 7.5 with juice to the Over. The lowest price out there is -134 at FanDuel, which isn’t too bad. With books being wise to this one, I’m honing in on the full game Under as the best bet.

Rodon has been excellent at Oracle Park with a 2.05 ERA, while Sampson has a 2.53 ERA on the road. Both pitchers excel at limiting hard contact and could have success in this matchup.

Neither lineup has been particularly dangerous, as San Francisco ranks 19th in wRC+ in the month of July while Chicago checks in at 23rd in that time span.

We’re rocking with the Under as Sunday Night Baseball’s best bet. 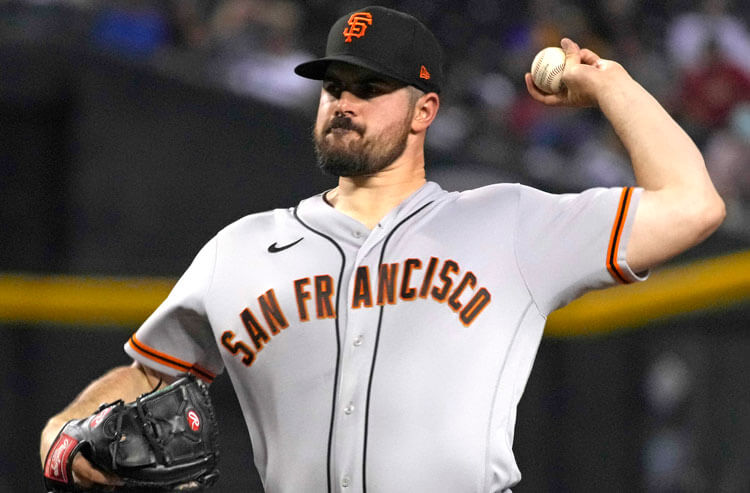 Cubs vs Giants Picks and Predictions: Rodon Gem Helps Under Cash Under SNB Lights
Provided by