Cubs vs Cardinals Picks and Predictions: We're Diggin the Dog On SNB

Zach Davies' numbers are not what Cubs fans would like them to be so far this season, but the veteran right-hander has allowed just five earned runs over his last 21 1-3 innings.

These clubs split the first two games of this weekend set, with the Redbirds installed as home favorites to take the rubber match — and extend their lead over the Cubs in the division.

Here are our best free MLB picks and predictions for Cubs vs. Cardinals, with first pitch set for 7:07 p.m. ET.

St. Louis landed on TwinSpires' odds board at -129 and is out to -139 at 4:30 p.m. ET. The Cardinals are taking 65 percent of bets and 60 percent of dollars on the moneyline. "We've seen some respected money on the Cards," TwinSpires trading analyst Zachary Lucas said. The total is at 8.5 (Over -124), with the Over getting 59 percent of bets/69 percent of money.

Zach Davies (2-2, 5.58 ERA): It's been a forgettable start to Davies' first season with the Cubs, to say the least. After posting a sub-.400 ERA in five of his first six MLB seasons, including a career-best 2.73 mark last year, Davies has an ugly 5.58 ERA this season, along with a sky-high 1.76 WHIP. Davies is primarily a sinker-changeup pitcher, and quite simply neither is working — opponents are hitting .329 off the sinker, .319 off the change and he has a .319 BABIP overall — although he has given up just five earned runs over his last 21 1-3 innings (four starts).

Adam Wainwright (2-4, 4.63 ERA): Despite closing in on turning 40, Wainwright has been productive at the back end of the Cards rotation. However, he has gotten roughed up in two of his last three starts, sandwiching 8 1-3 shutout innings with a 5 2-3 inning, five-run start and his most recent effort of six runs on eight hits across four innings versus the Padres. Wainwright still relies on a big curveball, which has kept opponents in check, along with a sinker (. 227 OBA), but opponents are hammering all of his secondary pitches.

Cubs: Jason Heyward OF (Out), Jake Marisnick OF (Out), Brennen Davis OF (Out).
Cardinals: Dylan Carlson OF (Questionable), Paul DeJong SS (Out), Jordan Hicks RP (Out), Andrew Miller RP (Out), Tyler O'Neill OF (Out).
Find our latest MLB injury reports.

The Cubs are 5-2 in the last seven meetings in St. Louis. Find more MLB betting trends for Cubs vs. Cardinals.

Despite being the division leader, the Cardinals were actually home underdogs through the first two games of this series and tonight's matchup marks just the third time St. Louis has been favored in its last 10 games.

St. Louis being the home chalk tonight is likely due to it sending a reliable vet to the mound in Wainwright, combined with the Cubs trotting out Davies and his ugly ratios, but there are a couple of reasons for us to actually like the visiting club.

Second, while Davies' numbers are awful so far, he really just had his stats destroyed by two bad outings and has allowed two earned runs or fewer in five of his nine starts. Davies has gone at least five innings in three straight outings, giving up just four earned runs total, and his .319 BABIP is quite unlucky and suggests some positive regression is in store for the righty.

Third, in addition to swinging the bats well recently, the Cubbies are the fourth-best curveball hitting team in the Majors, with a 6.7 wCB rating (per Fangraphs). That means Wainwright may need to use less of his breaker and more of his secondary offerings — which opponents have been exploiting this season ( over .300 OBA on his cutter, fastball and changeup).

Combining all these factors, along with the Cubbies getting a juicy price on the moneyline, makes it too good for us to pass up on the road dogs tonight.

Through the first two games of this series, the Cardinals have scored a total of three runs, while the Cubs scored just one run yesterday and had a 12-run outburst on Friday, but that was mostly beating up on the weaker arms in St. Louis' bullpen.

St. Louis' starting pitchers have given up three earned runs over 10 innings against the Cubs this weekend and have allowed two earned runs or fewer in nine of its last 11 games.

It's not crazy to expect another solid outing from the Cards' staff, as well as banking on Davies to keep a depleted St. Louis lineup, which has topped four runs just twice in its last nine games, in check.

The Under is 6-1-1 in the last eight head-to-head meetings, and we like it to cash again tonight. 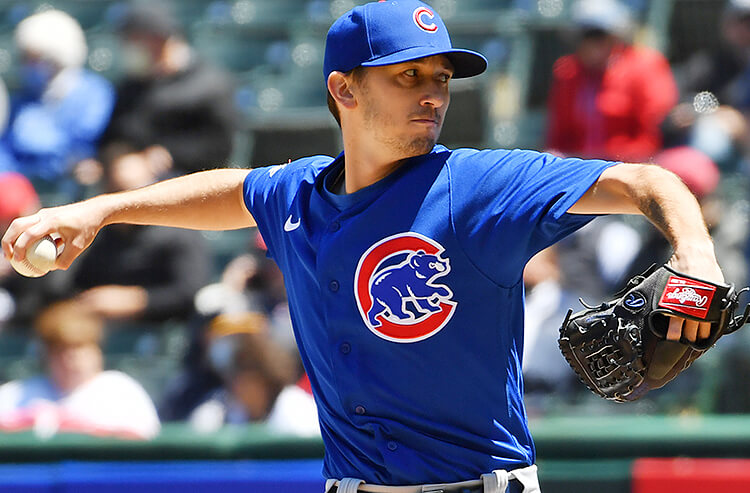 Cubs vs Cardinals Picks and Predictions: We're Diggin the Dog On SNB
Provided by