Houston has reaffirmed its status as a World Series contender in recent weeks, with a powerful lineup crushing everything. With the White Sox and struggling starter Lucas Giolito ahead today, our picks expect the Astros to keep rolling.

There are six matinee games on the MLB betting this Thursday, including a clash between the Houston Astros and Chicago White Sox. The Astros have the best record in the American League, but the White Sox have been picking up steam this month as well and took the first two games in this series.

The 'Stros won the matchup last night, edging the Sox 3-2, and will try to even up the series with a win as short road faves today.

Here are our best free Astros vs. White Sox MLB picks and predictions for August 18, with the opening pitch scheduled for 2:10 p.m. ET.

Luis Garcia (9-8, 4.03 ERA): Garcia started the year strong but has struggled since July, pitching to a 4.93 ERA over his last seven starts. The 25-year-old has allowed four earned runs in three of his last four starts, most recently against the A's last Friday when he gave up eight hits and a pair of walks in six innings.

Lucas Giolito (9-6, 4.92 ERA): The right-hander is going through his worst season since 2018, pitching to a 1.49 WHIP with an opponent batting average of .284 through 21 starts. In his last outing, he scattered eight hits and four earned runs in seven innings against the Tigers last Saturday, so he's pitching on just four days of rest.

The Astros are 24-7 in their last 31 games versus a team with a winning record. Find more MLB betting trends for Astros vs. White Sox

The Astros have gone 39-19 since the beginning of June and now have the best record in the AL and the second-best World Series odds. The White Sox are in third place in the AL Central, but just two games separate them from the first-place Guardians and they've been very good at home lately, winning seven of their last eight contests.

With sluggers like Yordan Alvarez, Alex Bregman, Jose Altuve, and Kyle Tucker, Houston has power throughout its lineup and can score on anyone. The Astros are fifth in the majors with a slugging percentage of .422 and have bumped that number up to .439 since the start of June.

They might need to put up runs today with the struggling Luis Garcia on the mound. Garcia put together a very nice season last year, pitching to a 3.48 ERA and finishing as the AL Rookie of the Year Award runner-up.

The Astros also have a terrific bullpen behind him, and although they blew the first two games of this series, their relievers still lead the majors with a collective 2.89 ERA.

The White Sox have a struggling starter of their own in Lucas Giolito. Giolito had an impressive 3.47 ERA with a 1.08 WHIP and 11.1 strikeouts per nine innings over the previous three years, but he's been awful this season. Over his last 14 starts, he has pitched to a 6.07 ERA with a 1.60 WHIP, and opposing batters have a sizzling .862 OPS against him.

The Sox might not be able to give him the run support he needs either. Their batters have done a solid job of making contact but haven't displayed much pop and rank just 18th in the majors with a slugging percentage of .386.

With the Astros boasting a clear advantage at the plate and in the bullpen while the White Sox send out a struggling starter, we'll back the road faves at a reasonable number.

The analytics suggest that Garcia is due for some positive regression but it's still hard to trust a guy that's been surrendering plenty of hits against lineups like the A's, Guardians, and Royals in recent weeks.

That said, Giolito has been even worse, and the lack of velocity and movement on his fastball has made it easier for batters to get a good read on his other pitches. Not only has he been getting torched over the last few months, he looked awful when he faced the Astros in June, surrendering eight earned runs in five innings of work.

The Astros haven't put up many runs this series but they are capable of going off at any given moment and Giolito is exactly the type of pitcher they need to break out of their mini-slump.

The 'Stros have generated a total of just eight runs in the first three games of this series, but with their proven track record, they're likely to break out eventually. They had scored at least six runs in eight of their previous 11 contests entering this series, and their lineup is loaded from top-to-bottom.

Add in a mediocre bullpen on the other side and a starting pitcher who has been brutal over the last two months, and it's hard to turn down the Over 4.5 on Houston's team total. Especially with it paying out at plus money. 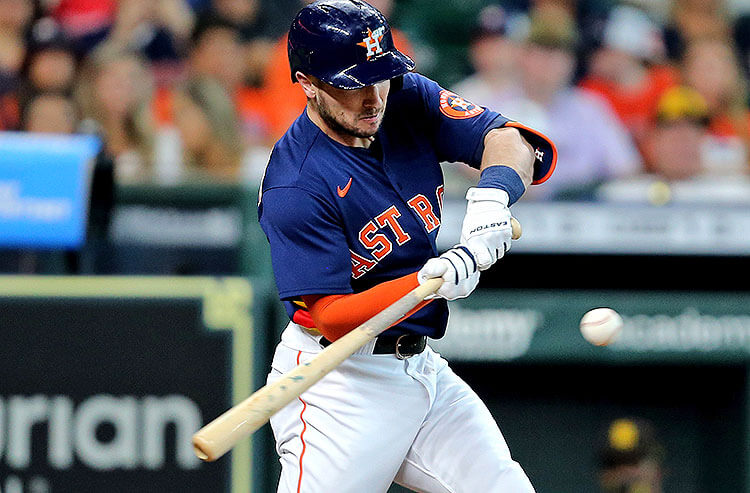