After splitting the first two games, the ALCS is down to a best-of-five as the scene shifts to Fenway Park. Both offenses are clicking on all cylinders but our MLB betting picks are backing the Astros, who have the more reliable starter on the hill. 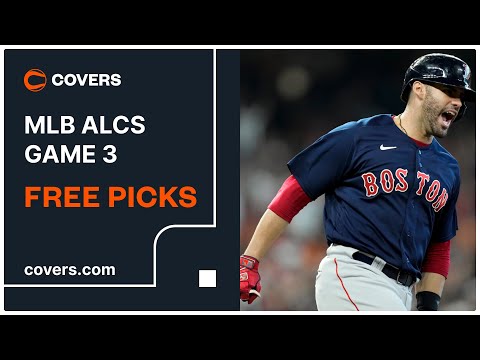 The ALCS heads to Fenway Park for Game 3 on Monday night with the series between the Houston Astros and Boston Red Sox all tied up at one game apiece.

The BoSox mashed grand slams in the first and second innings of their Game 2 win at Minute Maid Park and held on for a 9-5 victory. MLB betting lines opened with the Red Sox as slim -115 home favorites for Monday.

Here are our best free Astros vs. Red Sox picks and predictions for Monday, October 18, with the first pitch scheduled for 8:08 p.m. ET.

Jose Urquidy (Regular season 8-3, 3.62 ERA): The 26-year-old logged a career-high 107 innings with a 0.99 WHIP and an opponent batting average of .218 this season. He'll be making his first playoff appearance of 2021 but made eight postseason appearances (four starts) over his first two seasons, allowing eight earned runs and 21 hits across 25 innings.

Eduardo Rodriguez (Postseason: 0-1, 5.40 ERA): Rodriguez went 13-8 with a 4.74 ERA and 1.39 WHIP in 31 starts during the regular season. He was gashed for two early runs in Boston's Game 1 loss to Tampa Bay in the ALDS but rebounded with a solid performance in Game 4, limiting the Rays to three hits and two runs through five innings.

A couple of early grand slams from Rafael Devers and J.D. Martinez propelled the Red Sox to victory on Saturday, which continues a season-long theme — Boston's big bats have led the way all year, with the Red Sox wrapping up the regular season tied for third in the majors in OPS (.778) while ranking fifth in runs per game (5.12).

Unfortunately, their pitchers haven't been anywhere near as productive and Rodriguez could find himself in trouble on Monday night. Not only did Rodriguez put up career-worst numbers in ERA (4.74), WHIP (1.39), and OBA (.277) this year but he was also shredded for 12 runs in 9 1-3 innings against the 'Stros.

The Astros will counter by sending Jose Urquidy to the rubber. The right-hander has looked sharp this season and should be well-rested after having his scheduled start in the ALCS pushed back. Urquidy pitched a gem against the Red Sox back in May, allowing one run and three hits while fanning nine batters in six innings.

Houston's sluggers are just as dangerous as Boston's, with the Astros boasting a .784 OPS and leading the majors with 5.38 runs per game during the regular season. And they tend to tee off against lefties like Rodriguez, batting .270 against southpaws.

Considering these teams are fairly even at the dish, we're backing the squad with the more reliable starter.

The total closed at 8.5 for the first two games in this series — and the Over hit both times, making it four straight meetings between these teams which have cashed the Over. That shouldn't be a big surprise for two squads that are among the best hitting lineups in the majors and have suspect pitching.

Postseason baseball is typically lower-scoring than regular-season contests but don't tell that to either of these offensive powerhouses. The Red Sox are averaging 6.43 runs per game with an OPS of .925 in seven playoff games while the Astros are plating 6.83 rpg with an OPS of .806 in six postseason contests.

Simply put, we don't like E-Rod's chances of navigating Houston's star-studded lineup and while Urquidy put up some strong overall numbers for the Astros, he did struggle down the stretch, pitching to a 4.69 ERA while surrendering five home runs through 16 1-3 innings over his last three starts.