Houston has been one of MLB's best teams since the end of April and will now see Nick Pivetta on the mound Wednesday at Fenway. There's no slowing this Astros team — our MLB betting picks highlight the value vs. the Red Sox.

The Houston Astros (24-13) are the hottest team in baseball. After a sluggish start to the season, Houston has gone an incredible 17-4 since April 26.

The Boston Red Sox (14-22) haven’t had a great season, but they did manage to take Game 1 from the red-hot Astros by a score of 6-3. Houston responded with a dominant 13-4 victory in Game 2 while plating nine runs against starting pitcher Nathan Eovaldi.

Will the Astros stay hot, or will the Red Sox play spoiler at home and steal the series?

Check out our MLB picks and predictions for the Houston Astros and Boston Red Sox on Wednesday, May 18 to find out.

The Red Sox opened as +120 underdogs at home. The line has moved against them at most books and they currently sit between +115 and +128. The total opened at a flat 9 and has not seen any movement yet.

Luis Garcia (3-1, 2.94 ERA): It’s been a strong start to the year for the 25-year-old Garcia. He’s won each of his last two starts, has allowed only three earned runs over his last 18 innings pitched, and he’s upped his strikeout-to-walk ratio to 37:9 on the season. His 2.75 xERA is great, but his 3.71 FIP is a slight sign of possible regression.

Nick Pivetta (1-4, 5.08 ERA): The numbers haven’t been pretty for Pivetta in 2022, although he did put forth a strong performance against the Texas Rangers in his last showing: seven innings, three hits, one earned run, and four strikeouts in a win. It was the second straight strong start for the right-hander after blanking the Chicago White Sox across six innings on May 7. Has he turned a corner? His 5.08 ERA and 5.43 xERA are still ugly, but his 4.00 FIP is a positive indication. He turned in one of his best seasons in 2021 with Boston, going 9-8 with a 4.53 ERA.

The Astros are 17-5 in their last 22 overall. Find more MLB betting trends for Astros vs. Red Sox

Luis Garcia has performed admirably for the ‘Stros, accumulating a 2.94 ERA with solid peripherals to match. He gets a soft matchup against a Red Sox lineup that ranks 25th in wOBA and 23rd in wRC+.

Boston hasn’t been able to do much offensively against left-handed pitching, mustering a .216 batting average while swatting just two home runs all season against southpaws — the fewest in the MLB. This should give the Astros the starting pitching advantage in Wednesday’s matchup, as Boston sends the mercurial Nick Pivetta to the mound.

Pivetta has shown flashes in recent starts, but his overall body of work in the big leagues has not been overly impressive. He has a career ERA of 5.16 for a reason, after all. He gets a difficult matchup against a hot Houston lineup that ranks second in wRC+ on the season.

Houston’s lineup has turned into a fearsome beast. DH Yordan Alvarez leads the way with a .955 OPS and has mashed 12 home runs. There’s plenty of support around Alvarez, including SS Jeremy Pena (.878 OPS), 2B Jose Altuve (.863 OPS), and OF Kyle Tucker (.824 OPS). This is a deep lineup from top-to-bottom and there aren’t many easy outs. It’s easy to see why they’ve been terrorizing opposing pitchers.

We give Houston the edge at the plate and on the mound. Considering Boston’s bullpen has been atrocious at times (4.21 ERA), we favor the Astros in all facets of the game. Houston has been hot, winning 17 of its last 21 games. We expect another win Wednesday.

Consider it a weak lean, but we believe the Over is the way to play the total.

The Red Sox found that out on Tuesday, when Eovaldi was tagged for nine runs (six earned) in less than two innings of work. He gave up five home runs and the Red Sox were forced to use six different relievers to quell the damage. While most of the relievers performed well (five different relievers each tossed a scoreless inning, respectively), the bullpen isn’t exactly operating at a perfect level of rest.

Luis Garcia has pitched well for the Astros, but he is a fly-ball pitcher who will be throwing at Fenway with the wind blowing 8-10 mph out to right field. We’re more bullish on Garcia’s outlook overall but still lean toward the Over given all the factors at play and how hot the Astros’ lineup has been.

The Astros have been mashing the ball and are the hottest lineup in the MLB. They get a favorable matchup against Pivetta and his 5.43 xERA.

We aren’t standing in front of this train. We expect the Astros’ lineup to keep performing well and will be targeting their team total runs. It can be had for a decent price of 4.5. You may need to lay some juice but be sure to shop around as reasonable lines are currently still on the board. 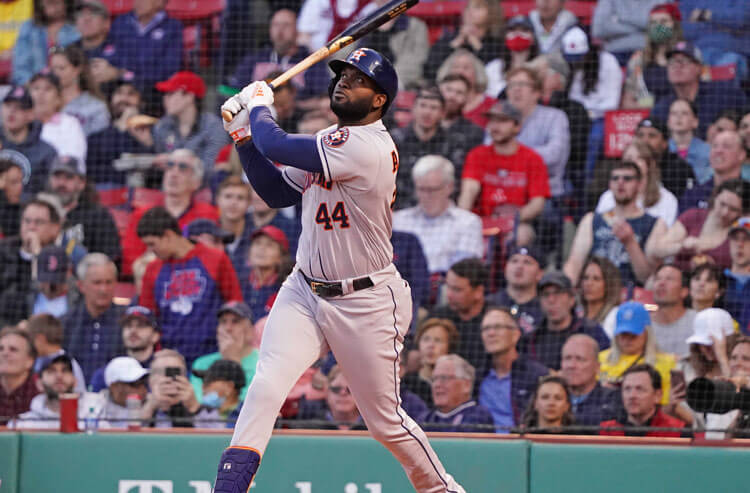