Tampa will send its ace Shane McClanahan to the mound tonight as the MLB betting favorite vs. Houston. Usually a sure thing for the Rays, today's hosts might have some trouble — our picks highlight the Astros' success vs. lefties.

The Tampa Bay Rays host the Houston Astros on Tuesday night in the second game of a three-game series at Minute Maid Park.

Houston won the first game 4-0 on Monday, clinching its fifth AL West title in six years in the process.

While the Astros are headed to the postseason, the Rays are still fighting for a playoff spot. We’ll talk about whether Tampa Bay can come away with a big win on Tuesday in our MLB picks and predictions for Astros vs. Rays on September 20.

Astros vs Rays picks and predictions

The Astros are the hottest team in the American League, having won 16 of their last 20 games. Monday’s victory not only assured Houston of another divisional title but also of a critical first-round bye in the newly expanded MLB playoff format.

Houston’s bats have stepped it up in September to fuel the team’s recent run. The Astros are hitting .261 with a .782 OPS this month, and they’ve been even hotter recently. Over the past seven games, the Astros have hit 14 home runs and are hitting .294 as a team while averaging 5.86 runs a night.

Cy Young Award candidate Shane McClanahan will take the mound for the Rays. Against most teams, McClanahan would be just the answer to slow down a red-hot lineup, but the Astros are particularly potent against left-handed starters.

The team has put up a .772 OPS against southpaws this year. Jose Altuve is one of the best hitters in the league against lefties, blasting them to the tune of a 1.03 OPS this year. Alex Bregman and Yuli Gurriel also have strong platoon splits that favor facing left-handed pitching.

The Rays have lost seven of their last 11 and are now sitting in the second wild card position in the American League. Still, it’s unlikely that Tampa Bay will fall out of a playoff spot, as either the Orioles and White Sox would have to make up a five-game deficit to catch the Rays or the Mariners.

McClanahan recently spent a short stint on the IL with a shoulder injury. He looked good in his first start back on September 15, allowing just three hits and shutting out the Blue Jays. However, he only went five innings in that appearance, and the Rays will likely limit him again as they look to prepare their ace for postseason baseball in just a few weeks.

Tampa Bay comes into this game as a solid home favorite, with the consensus moneyline settling somewhere around -150. While there’s a logic to making the Rays the favorite tonight, the current lines are heavily overvaluing McClanahan, both because of his current limitations and due to Houston’s ability to hit southpaws. I’m taking the Astros to win straight up at +140 tonight.

The Astros have been one of the most dominant teams in baseball throughout the season. Houston boasts the best record in the American League at 97-51, and its +203 run differential trails only the New York Yankees (+209) among AL teams.

That success hasn’t only come at home, as the Astros have put up a 47-28 mark on the road this year. Houston has also won 16 of its last 20 games. The Astros have also won each of the last three games behind starter Christian Javier, though they are only 12-10 overall in his starts this year.

Tampa Bay sits at 82-65 on the year, good for third place in the AL East and a likely wild-card spot. The Rays have remained solid in the second half, going 31-23 despite a recent slump that has seen the team drop seven of its last 11 games.

While starter Shane McClanahan has been outstanding for the Rays, they haven’t been automatic behind him, going 16-10 in his starts this year.

We don’t have much head-to-head data to go on for Tuesday’s game. In fact, Monday marked the first meeting between these two teams all year, meaning Houston is 1-0 against Tampa Bay on the season.

Oddsmakers and bettors alike are predicting a pitcher’s duel on Tuesday night. The total opened at just 7, and the public quickly bet the Over/Under down to a paltry 6 as of this morning.

McClanahan plays a major role in the extremely low number. He hasn’t allowed a run in his last three starts, though that includes his brief appearance against the Marlins on August 30, when he suffered his shoulder injury. While he looked a little more human earlier in August, there’s no doubt that McClanahan is one of the best starters in the game right now.

As I noted earlier, however, there are a couple of reasons to expect Houston to score some runs. The Astros have battered southpaws all year long, and McClanahan will likely go only five to six innings on Tuesday, as he continues to build up since his return from injury.

Astros starter Cristian Javier has been solid as of late. He tossed six shutout innings against the Tigers on September 14 and hasn’t allowed more than three runs in a start since July 6. However, like McClanahan, he probably won’t go deep into the game: Javier hasn’t thrown more than six innings in any of his last 11 starts.

Runs will be at a premium on Tuesday, but six is a very low number, even in a pitcher-friendly stadium like Minute Maid Park. If there is value on the total here, it’s on the Over.

Cristian Javier (9-9, 2.87 ERA): The 23-year-old Javier has filled a variety of roles for the Astros this season. While he has started 22 games — more than he started in his first two seasons combined — he has also come out of the bullpen on five occasions when needed. At 3.34, he has posted by far the lowest FIP of his career, while setting new highs in innings pitched (131.2) and strikeouts (173).

Shane McClanahan (12-5, 2.13 ERA): The 25-year-old has emerged as the ace of the Tampa Bay rotation, allowing a league-low 5.9 hits per nine innings to fuel a stellar .860 WHIP. McClanahan throws a high-90s fastball while using his slider and curve to get strikeouts, along with an improved changeup he uses almost exclusively against righthanded batters.

The Astros are 39-13 in their last 52 games against left-handed starters. Find more MLB betting trends for Astros vs Rays 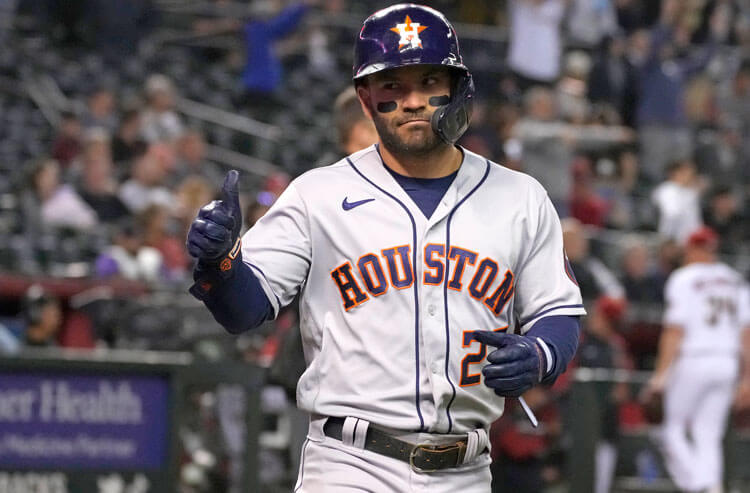