Astros vs Angels Picks and Predictions: No Faith in the Halos

Los Angeles has lost eight of nine after getting swept in its previous series, and now it must open up a set against red-hot Houston. Our MLB betting picks for Astros vs. Angels highlight what should be clear by now: the Angels stink.

The Los Angeles Angels (38-49) are in the dumps again after a four-game sweep at the hands of the Orioles.

Current conversations among talking heads and fans alike have essentially shunned the organization for wasting two generational players in Mike Trout and Shohei Ohtani, and the team's play as of late has done little to argue against the point.

They open a three-game set against the Houston Astros (56-29), who have ascended the American League ranks after managing a 19-5 record in the last month.

Continue reading for free MLB picks for the Astros vs. Angels on Tuesday, July 12.

The Astros opened as -128 favorites and can be found in that range across almost all books. The total opened at 8.5 but has since seen movement towards the Under, with some books showing a juiced Under on the 8.5 and others moving to an evenly priced 8.0.

Luis Garcia (7-5, 3.81 ERA): Garcia is hardly one of the more well-known starting pitcher names for the Astros in recent years, but he has certainly been solid in his own right. He logged 28 starts last year and managed a 3.48 ERA and 1.18 WHIP. Garcia has allowed more than three earned runs just three times in 15 starts thus far, but one came in his last outing (5 ER in 6 1-3 IP).

Noah Syndergaard (5-7, 3.84 ERA): Syndergaard hasn't been the same pitcher that finished near the top of the NL Rookie of the Year ballot in 2015 or appeared in the 2016 All-Star game, but he still has a decent amount left to give. After opting out of the 2020 season and appearing in just two starts last year before a season-ending injury, Syndergaard has put together a 2022 campaign in which he has managed a 3.84 ERA and 1.17 WHIP.

The Angels have gone 17-6-3 to the Under in their last 26 games. Find more MLB betting trends for Astros vs. Angels

Astros vs Angels picks and predictions

Despite generational talents like Mike Trout and Shohei Ohtani, the Angels are on a trajectory that will land them their eighth straight absence from the playoffs. In fact, since Trout became a full-time player in 2012, the Angels have had a winning record just three times and have made the playoffs just once (when they appeared in the ALDS in 2014 and were promptly swept).

Though Ohtani ranks fifth in WAR and Trout ranks 10th, the Angels are 38-49 and amid a nine-game stretch in which they've won just one game. This is the same team that already put together a 14-game losing streak this season.

Mindless roster construction, costly free agent signings, and poor player development have left what should be two transcendent superstars in the world of sports without any opportunity to play on a larger and more meaningful stage.

On Tuesday, the two will be tasked with reversing the Angels' fortunes against one of baseball's hottest teams. Houston has gone 19-5 in the last month and currently sits second in the American League with a firm cushion behind it, nearly 10 games ahead of the third-place Twins.

While the Astros’ success years ago comes with a massive asterisk, it's undeniable that they are one of baseball's savviest organizations when it comes to player development and roster construction

During the last month, the Astros have had the best OPS of any team and have jumped from 22nd in runs scored per game to 12th. On the other side of the ball, they've had the third-best ERA (2.72) and strikeout rate (9.95 K/9) during that span, and have allowed the lowest batting average (.185) as well.

Los Angeles has also gone 4-1-2 toward the Under in its last seven and is in a longer stretch of 17-6-3 across its last 26. With the benefit of the hook on the 8.5 still available at some books, it may be best to look in that direction as well.

Tonight's pitching matchup is well-rounded enough to lean on at least one of the two pitchers putting in a good enough performance to keep it under tonight's number.

As mentioned, the Angels have not shown much of anything this season or during this current stretch to provide a sensical reason to back them in tonight's series opener — especially not at the odds available.

If we were to be generous, you could call the starting pitching matchup even. Even then, Luis Garcia has the league's best bullpen behind him — Houston's relief arms have pitched to a league-best 2.63 ERA. On the flip side, Noah Syndergaard has a Bottom-10 unit behind him (4.13 ERA).

The odds on this matchup may scream trap, considering the form of these teams, but there truly is no reason to back the Angels in their current state. The Astros have more than earned that respect and consideration over the last month. 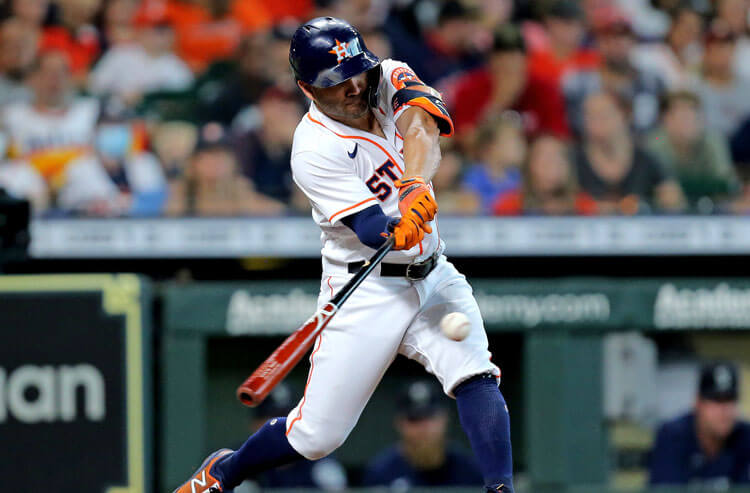 Astros vs Angels Picks and Predictions: No Faith in the Halos
Provided by

Red Sox vs Yankees Picks and Predictions: Justifying the Over Beyond Just Judge
Robert Criscola | Sep 24, 2022