A's vs Yankees Picks and Predictions: Kaprielian Will Outshine Taillon In Series Opener

Once the prize of the Yankees farm system, James Kaprielian is making his Bronx debut — as a member of the Oakland A's. Considering New York's Jameson Taillon has struggled lately, we like the MLB odds for Kap and the A's to win tonight.

The New York Yankees are fresh off a three-game sweep of the Toronto Blue Jays, and they’ll now take on the Oakland A's at Yankee Stadium in the Bronx on Friday, June 18.

The A's are on a six-game winning streak heading into this one, so they’ll be confident despite taking the field as MLB betting underdogs.

Which of these teams will stay in the win column here once the game gets underway at 7:05 p.m ET? You’ll want to keep reading our A's vs. Yankees MLB picks and predictions to help you decide what to back.

James Kaprielian (3-1, 3.51 ERA): Kaprielian was once one of the most promising prospects in the Yankees organization but he had trouble staying healthy and was eventually shipped off in the Sonny Gray deal. Now, the righty is finding his footing in Oakland, as Kaprielian has allowed two or fewer earned runs in all but one of his six starts this season, and he has struck out 13 batters over his last two outings. Talent was never the issue for the 27-year-old, who is going to be jacked up against the team that gave up on him.

Jameson Taillon (1-4, 5.74 ERA): Taillon was unable to make it out of the first inning in an away start against the Philadelphia Phillies on June 12, as the righty gave up four earned runs on five hits and recorded only one out. Taillon has an 11.12 ERA and 0-3 record on the road this season, but he is 1-1 with a 3.22 ERA at Yankee Stadium.

The A's are 6-1 in their last seven road games against teams with winning records. Find more MLB betting trends for A's vs. Yankees.

Kaprielian is going to be extremely motivated to go out and beat his former team, but he’ll need to make sure he isn’t a little too gassed up. The righty needs to remain calm on the mound and just follow the script, as he could get into trouble if he starts walking batters and missing his spots due to adrenaline.

With that said, Kaprielian has displayed a lot of mental toughness early in this season and it wouldn’t be too surprising to see him strike out a ton of batters here. New York can occasionally struggle to make good contact, and the team doesn’t have anybody that has faced the righty in his Major League Baseball career. That means the Yankees will be guessing quite a bit in the early innings.

Taillon also hasn’t faced many of the A's coming into this game, so he’ll also have the element of surprise on his side too. However, the righty just isn’t pitching well at the moment. His home/away splits certainly inspire a bit more hope for New York in this game but Yankee Stadium is still an extremely easy place to hit.

At some point, the mistakes that are plaguing Taillon on the road will come back to haunt him in the Bronx. That could begin tonight, as the A's have one of the better offenses in baseball. Matt Olson also clobbers right-handed pitching, and his swing is a perfect fit with the short porch in right field.

He could go yard against Taillon, especially the version we’ve seen lately — his arm just isn’t there right now.

Kaprielian has looked like a really good pitcher this season but his emotions could get the best of him against his former team. While the righty should eventually settle down, don’t be surprised if the Yankees take advantage of anything he gives them early on.

Meanwhile, Taillon’s arm just doesn’t look right at the moment. A lot of people think the Yankees need to give him a start or two off just to collect himself but it appears that Aaron Boone is ready to continue throwing him out there.

As long as that’s the case, don’t be surprised if these Yankees games go Over in his starts — there has been at least 10 runs scored in six of his eight starts this season. 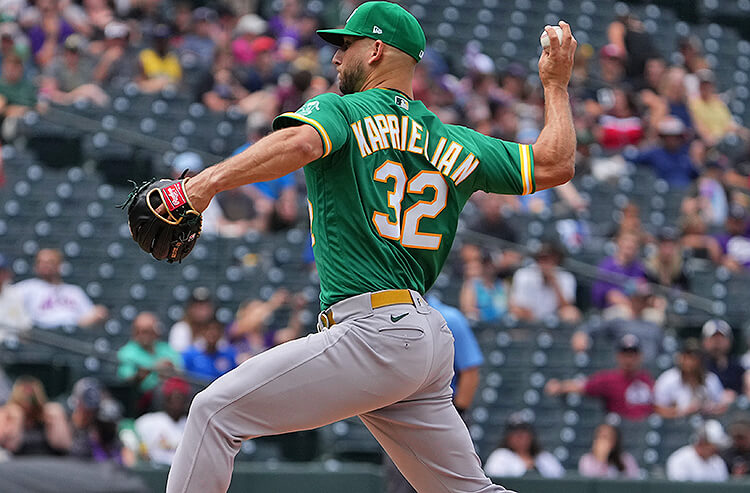 A's vs Yankees Picks and Predictions: Kaprielian Will Outshine Taillon In Series Opener
Provided by