A's vs Red Sox Picks and Predictions: Boston Beats Up on Kaprielian

It's a lopsided matchup at Fenway today, with the Red Sox looking for an 11th win in 13 games against the A's — who have lost 12 of 13. Boston's got a clear edge, so where's the MLB betting value? We break it down in our picks and predictions.

The Boston Red Sox have won 10 of their last 12 games and now host an Oakland Athletics team that has lost 12 of its last 13. These two clubs are moving in opposite directions right now, with the Sox surging and looking to keep it up with another win at Fenway Park.

Will Boston stay hot with a win over Oakland on Wednesday? Keep reading our A’s vs. Red Sox MLB picks and predictions to find out.

The best price you’ll find on the Red Sox moneyline is -185, so this is a game to turn to the run line if you’re looking to back Boston. As for the total, the number is all the way up at 9.5 and you’ll have to pay a small price to take the Over on that.

James Kaprielian (0-3, 5.74 ERA): Kaprielian is having a really rough 2022 season thus far, but he was 8-5 with a 4.07 ERA in 2021 and he was a reliable part of the rotation. The 28-year-old also happens to be coming off of a solid start against the Guardians, as he pitched five innings of two-run ball in that game. Perhaps that’s exactly what he needed to get himself going.

Josh Winckowski (0-1, 12.00 ERA): Winckowski made his first start of the year against the Orioles on May 28, letting up four earned runs on six hits in three innings of work. The 23-year-old struggled in that one, but he does have a 3.38 ERA over nine starts in the minors this year. He’s the 13th-ranked prospect in the Red Sox organization, so he does have quite a bit of talent.

The Red Sox are 17-4 in their last 21 games against AL West opponents. Find more MLB betting trends for A's vs. Red Sox.

This is a game in which you’ll want to try not to overthink things and roll with the better baseball team.

Oakland is ice cold entering this meeting with a red-hot Boston team, and the Red Sox also happen to be facing a right-handed pitcher here.

Not only is Kaprielian struggling in 2022, but Boston is eighth in the league in weighted runs created and seventh in runs scored against righties. This is an offense that can really get hot against a righty, and guys like J.D. Martinez, Xander Bogaerts, Rafael Devers, and Alex Verdugo are all players to watch.

Meanwhile, the Red Sox are sending one of their best pitching prospects to the mound, and one would think that he’ll be able to win the pitching matchup against Kaprielian in this game.

It won’t be perfect by any means, but the Red Sox can cover this run line even if Winckowski lets up four or so runs over five innings. That’s the type of high-scoring game this will be.

Boston is also 9-4 in its last 13 games at home, while also being 88-40 in its last 128 games against teams with winning percentages of 40% or less. The Red Sox handle their business against inferior competition.

As for the Red Sox, the Over is 8-3-1 in the last 12 games that Boston has played with a total of 9 to 10.5. So, when the oddsmakers peg the Red Sox for high-scoring games, they’re usually right.

It really shouldn’t be surprising if these two end up scoring a ton of runs in this game, as the Athletics are sending a mediocre righty to the mound against a team that hits righties extremely hard.

Meanwhile, the Red Sox might be throwing one of their better prospects out there, but the righty was clearly a bit nervous in his debut earlier in the year. He can easily let up three or four runs in his innings in this one.

Boston has scored six runs in two of its last three games and the team now gets to face a pitcher that had allowed four or more runs in three consecutive starts before giving up just two runs over five innings against the Guardians.

The Athletics have, however, allowed at least six runs in each of Kaprielian’s last two starts overall, and the Red Sox have the lineup to pounce on him here.

Boston is in the Top 10 in the league in batting average, runs scored, and weighted runs created against righties this year. And, considering this is a weaker righty than usual, there’s a really good chance this Red Sox offense breaks out at home. 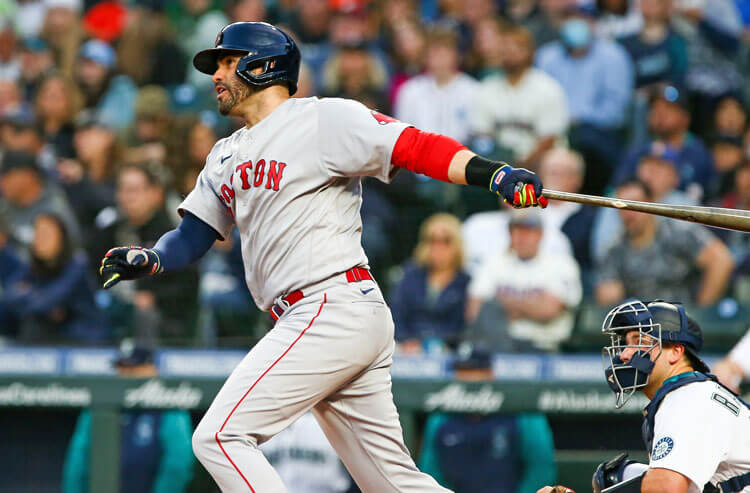 A's vs Red Sox Picks and Predictions: Boston Beats Up on Kaprielian
Provided by