With more potential bettors than ever, Week 1 of NFL action helped drive a spike in betting activity for legal sportsbooks.

The first week of the National Football League’s regular season appears to have been a massive one for the sports-betting industry.

With more potential bettors than ever — thanks to the ongoing legalization of sports gambling across the United States, and the overhaul of wagering options in Canada —  Week 1 of NFL action helped drive a boom in betting activity for legal sportsbooks.

The numbers for Week 1 were "off the charts," according to Johnny Avello, director of race and sportsbook operations at DraftKings Inc.

"People were just excited about the season getting started," Avello said in an interview with Covers. "And between all the new offerings we have — and the in-game wagering continues to grow —  things just are looking very positive."

One data point suggesting just how big Week 1 was for the books came from Vancouver, British Columbia-based GeoComply Solutions Inc., which says its compliance services underpin nearly all of the U.S. online sports betting market.

According to GeoComply, the growth of the legal betting industry led to the “highest four-day stretch of geolocation transactions” it had ever recorded.

From last Thursday to just before the NFL's Sunday night game, there were 58.2 million such transactions in 18 states and the District of Columbia, the company said. It was an increase of 126 percent over the 25.8 million transactions that GeoComply processed for the same period a year earlier.

“Preparing for this NFL season has been a process that began before the end of last season, and we expected high volumes, but what we have seen has surprised us nonetheless,” said Lindsay Slader, managing director of gaming for GeoComply, in a press release. “The level of demand across new markets, such as Arizona, indicates that consumers have long waited for the option to legally place a sports bet.”

Another plus for the books was the strong showing by the underdogs in Week 1, as they went 12-4 against the spread.

Deutsche Bank analyst Carlo Santarelli wrote in a September 13 note on DraftKings that what they’ve seen and heard suggests that “hold should be high for the bookmakers, given the skew of winners doesn't bode well for the public.”

While there was "a ton" of money on the Pittsburgh Steelers and Philadelphia Eagles to win straight up, which they did, the week wound up as a pretty good one for DraftKings, Avello said. The popular Green Bay Packers getting upset by the New Orleans Saints certainly helped the cause.

"The Green Bay game was a game that kind of turned it all around for us," Avello said. "And then some of these other games fell into place."

Some of the newer players in Canada likely got a boost from the start of the NFL regular season as well. The country recently legalized single-game sports betting, and several government-owned lottery and gaming corporations have begun taking those wagers.

Ontario Lottery and Gaming Corp. is one of those single-game greenhorns, having launched a new online sportsbook on August 27. While PROLINE+ had taken more than C$3 million in wagers by the morning of Thursday, September 9, OLG told Covers before Monday Night Football that the handle was nearing C$6 million — in other words, almost double after just one NFL weekend.

Although not every PROLINE+ wager has been on the NFL, OLG says football is the book’s top sport, accounting for 38 percent of all wagers as of Monday evening. That's up from 23 percent on September 9, and also well ahead of second-place baseball, which is currently drawing around 31 percent of all wagers.

Moreover, single-event bets are proving "very popular" with PROLINE+ players, as they represent 77 percent of all wagers so far, OLG spokesperson Tony Bitonti said in an email.

And even with the bulk of NFL wagering happening online, the league's return still probably inspired more than a few bettors to drag themselves down to a physical sportsbook. Putting the Monday Night Football game in Las Vegas probably didn’t hurt.

MGM Resorts International CEO Bill Hornbuckle told a JPMorgan Chase & Co. forum on Monday that they had taken approximately 300 percent more NFL bets over the past weekend in Las Vegas compared to a year earlier.

“And the simple reason, I think, is because the game’s here, and therefore, the people are here,” Hornbuckle said.

That Week 1 momentum could carry over into Week 2.

DraftKings' Avello said he's expecting another strong week helped by "good betting" games such as the Las Vegas Raiders playing the Pittsburgh Steelers, or the Buffalo Bills squaring off against the Miami Dolphins.

"The whole weekend looks good again," Avello said. "Now, will it top Week 1? I don't know about that. But I still expect our handle numbers to be bigger than they were last year for Week 2." 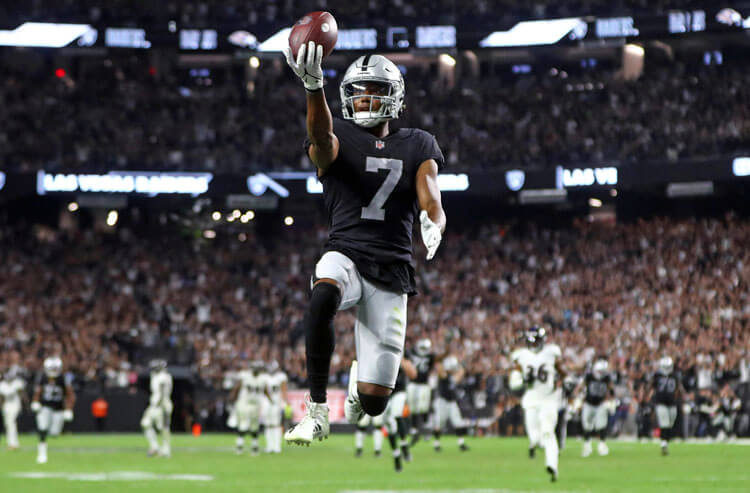