Horse racing bettors looking to increase their winnings can parlay placements to pick the Top 2, 3, and 4 finishers in the field. Find out the best angles for Preakness Stakes trifecta, superfecta, and exacta picks as we break down the field.

The 147th running of the Preakness Stakes will take place at Baltimore’s Pimlico racecourse on Saturday, as the stage is set for the middle jewel of the Triple Crown.

The Preakness lured a field of nine, led by 6-5 morning-line favorite Epicenter, who will break from post No. 8. He was last seen running second in the Kentucky Derby just two weeks ago at Churchill Downs.

Epicenter is one of three entrants returning from the “Run for the Roses,” with the other two being No. 1 Simplification (6-1) and No. 6 Happy Jack (30-1). The former ran a respectable fourth, while the latter checked in a distant 14th.

Not among the Preakness competitors is shock Kentucky Derby winner Rich Strike, whose camp opted to wait for the Belmont Stakes on June 11th. Nevertheless, the Preakness could go a long way in determining year-end honors in the 3-year-old division.

The race also promises to offer solid wagering opportunities, so let’s dig in to the Preakness Stakes odds and determine how bettors should play the exacta, trifecta, and superfecta.

It’s a great feeling to be able to pick the winner of the Preakness Stakes, but those settling for simple win betting are leaving the chance for a big payday behind.

The average $2 exacta payout over the last 10 editions of the Kentucky Derby is a staggering $569.10. Even if you exclude the 2019 exacta payout of $3,009.60, that featured longshot winner Country House on top, the average exacta over the other nine runnings in that span was a healthy $298.00.

Hitting the Preakness trifecta or superfecta can set a horseplayer up for multiple months. Here is our wagering advice for each of these three popular Preakness Stakes bets.

The exacta requires the bettor to select the Top 2 finishers of a race in exact order. The minimum wager at Pimlico is $1. Bettors can also "box" an exacta, meaning the two (or more) selected horses on a ticket can finish in any order, albeit at an increased cost.

No. 5 Early Voting (7-2) is the horse we like most in the Preakness Stakes and will be “singled” on top for the purposes of this exacta play.

The son of Gun Runner took his first career loss when last seen in the Grade II Wood Memorial, but it was his best ever effort based on speed figures. It took a determined rally from Mo Donegal – a closing fifth in the Kentucky Derby following a slow start – to catch Early Voting that day.

Prior to the Wood Memorial, Early Voting won the 1 1/8-mile Grade III Withers Stakes at Aqueduct in frontrunning fashion, with hardly an anxious moment against 10 others. That was just his second career start, and the Chad Brown trainee has run only three times to date. This means that we may not yet have seen the best Early Voting has to offer.

He is training well for the Preakness and is bred to get the 1 3/16th-mile distance. Having Jose Ortiz in the irons is never a bad thing either. Brown took a similar path to his first Preakness win in 2017, when Cloud Computing ran third in the Wood, bypassed the Derby, and found the wire first at Pimlico.

No. 8 Epicenter (6-5, morning-line favorite) has competed in five straight stakes, finishing in the exacta in all five races. He won the Gun Runner, the Grade II Risen Star, and the Grade II Louisiana Derby at the Fair Grounds this season, and ran second in both the Grade III Lecomte – and most importantly – the Grade I Kentucky Derby.

The Steve Asmussen trainee will once again have the services of Eclipse Award-winning jockey Joel Rosario, who can place this son of Not This Time just about anywhere he wants depending on the pace scenario. However, there are reasons to side against Epicenter on top, and not just because the price is unappealing.

We may have already seen the best that Epicenter has to offer, as the Kentucky Derby represented a small step backward in the speed figure department compared to the Louisiana Derby. Epicenter could also be dulled by the quick two-week turnaround, while Early Voting has had ample time to rest and recuperate since the Wood Memorial on April 9.

No. 2 Creative Minister (10-1) could be heard from late in the Preakness, especially if the pace is hot, and may spice up the exacta.

The son of Creative Cause ran in an allowance/optional claiming race at Churchill Downs on Kentucky Derby day and uncorked a huge effort for trainer Ken McPeek, who conditioned 2020 Preakness victress Swiss Skydiver. Like Early Voting, Creative Minister has run only three times to date and has the potential to improve. Brian Hernandez Jr. pilots this talented colt in his stakes debut.

The trifecta tasks the bettor with determining the first three finishers of a race in exact order. The payoff can be much higher than the exacta, but both the ticket cost and the risk factor increase significantly, even with a minimum wager of 50 cents.

With the potential for a better payday than the exacta, we’ll use Epicenter on top along with Early Voting, counting on the two race favorites to finish in the Top 2 in our main wager. We’ll use Creative Minister for third, along with two other contenders in No. 1 Simplification (6-1) and No. 4 Secret Oath (9-2).

Simplification missed hitting the trifecta for just the second time in his eight-race career in the Kentucky Derby, but his fourth-place effort was a solid one with a wide trip. John Velazquez takes over in the saddle for Jose Ortiz, but it’s doubtful that Simplification will take the necessary step forward speed figure-wise on Saturday to finish better than third.

Secret Oath is the lone filly in the Preakness, fresh off an inspiring Grade I Kentucky Oaks triumph for Hall-of-Fame trainer D. Wayne Lukas. She may not be fast enough to compete with the boys for the win, but she should be in the picture in the Pimlico homestretch under Luis Saez.

In an additional but smaller trifecta wager, we’ll add Creative Minister in for second while keeping everything else the same.

The superfecta is even harder to nail down than the trifecta, as it requires the bettor to pick the first four finishers of a race in exact order. Of course, the potential payday can be tremendous. The minimum wager is just 10 cents, making it a little easier to get involved.

Early Voting and Epicenter will once again be our key horses in the Top 2 slots, with Creative Minister used in a small wager for second, but restricted to third and fourth in our bigger bet. Simplification and Secret Oath will be used in the three-slot and the four-slot in our superfecta plays, along with No. 7 Armagnac (12-1) and No. 9 Skippylongstocking (20-1) for defensive purposes.

Armagnac may not have beat much at Santa Anita on May 8, but he earned a strong enough speed figure in that recent win for Tim Yakteen to suggest he can compete with these under Irad Ortiz Jr. Skippylongstocking has blossomed into a better horse since stretching out to 1 1/8-miles, winning an allowance/optional claiming at Gulfstream Park before settling for third in the Wood Memorial.

The Preakness Stakes is held on the third Saturday of May and will take place on May 21, 2022.

The Preakness Stakes is held at Pimlico Race Course in Baltimore, Maryland.

The Preakness Stake will be broadcast on NBC on May 21 2022. 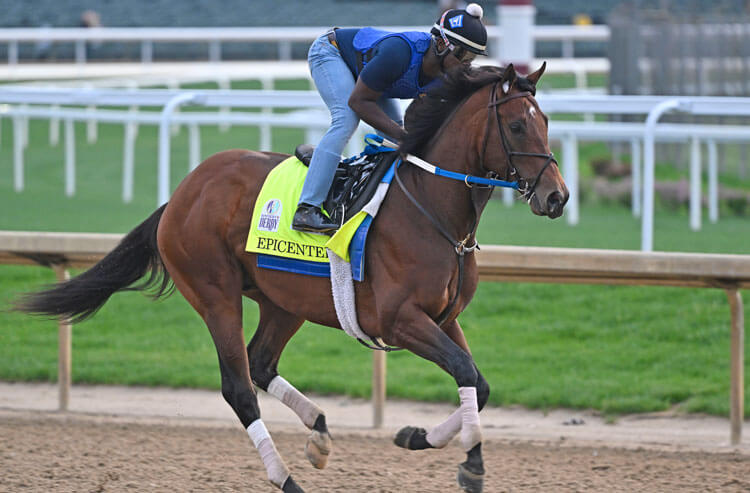 Preakness Picks and Predictions: Which Horses Will Win, Place, and Show at Pimlico?
Monique Vág | May 21, 2022