The 2021 Preakness Stakes is just one day away and I've made my favorite picks and predictions for the race on Saturday.

Despite all of the controversy surrounding Medina Spirit and allegations towards trainer Bob Baffert, he has been given the green light to continue on his Triple Crown quest. Along with a much smaller field than the Kentucky Derby, we see some familiar faces from the Derby trail — along with a handful of new contenders — hoping to try their luck in capturing the second jewel of the Triple Crown.

Let's take a look at some prop bets, as well as my favorite trifecta pick, to add a little bit of extra excitement leading up to the big race:

There projects to be a lot more speed and horses likely to be vying for the front end. The Preakness Stakes should play out a lot differently, with a lot more action up front as compared to the Derby. There could be a few lead changes and a pressed pace. If that is the case, this race could set up really well for horses sitting just behind the pacesetters—or ones working out a closing trip to excel. Let's hope for a fast pace up front and a horse to just blow right by them all late.

The two most recent Preakness Stakes times have both come in under 1:55, with War of Will recording a time of 1:54:34 and, most recently, Swiss Skydiver clocking in at 1:53:28. Similar to the margin of victory, a faster pace up front — and the likelihood of lots of speed — should really help this prop come through on Saturday.

One of the most popular racing proposition wagers is the head-to-head matchups, which pits two horses with similar odds together. Placing a wager on the head-to-head does not require you to choose the outright winner of the race, but simply which of the two options will finish better.

Out of the plus-money props, this one offers the best value. Unbridled Honor made up a lot of ground over a sloppy track in the Lexington, his most recent race, after spotting the field as many as 12 lengths early. He is capable of showing a little bit more speed than he did in his two most recent tries, and with the smaller field size here it could have him a lot closer.

Risk Taking would have to improve a lot off of his most recent start, and although he should be better racing two turns, I think a horse like Unbridled Honor could be better suited to hit the board or pick up a cheque late.

Trainer Bob Baffert's two runners really stand clear above the rest. Both should be forwardly placed and I think can fend off some late closers. To round out the trifecta, Keepmeinmind could benefit from the speed upfront and pass enough tired horses late to get up in time for third place.

It's still a few days before Preakness week officially begins but I'm getting things started with an early futures bet on Midnight Bourbon at +800.

With the smaller field size at the Preakness, post positions are not as important as in a race like the Kentucky Derby, where horses are eliminated due to slow starts or running into traffic and having trouble navigating a crowded field. My top pick in the Preakness is a horse that suffered a troubled trip in the Kentucky Derby.

Midnight Bourbon got out to a slow start and was forced into a wide rally late, which ultimately had this horse traveling many more feet than the winner. Jockey Irad Ortiz Jr. will now be on board for the Preakness, and this colt could be given a much more aggressive approach, especially right from the break.

Where can I bet on the Preakness Stakes?

This all depends on where you live. If you’re in the USA, betting on the Preakness Stakes online isn’t as simple as simply launching your favorite sportsbook app. Instead, you’ll have to use a specialist-pooled horse racing betting site such as TwinSpires. 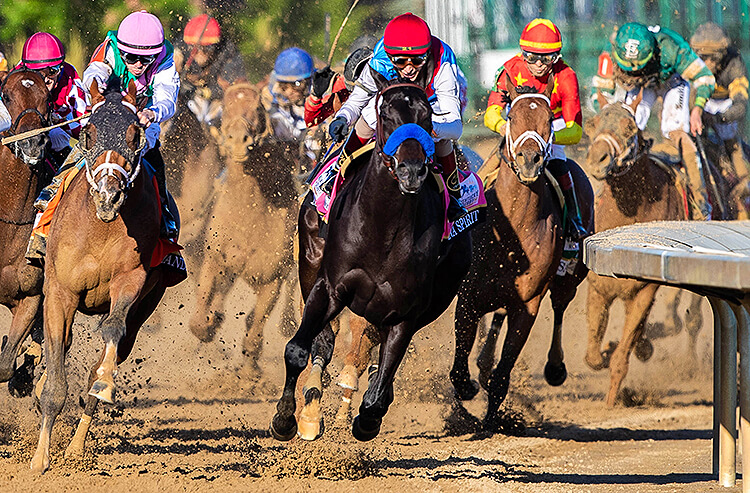