The Triple Crown run continues for 2021, with Preakness Stakes odds on the board ahead of the May 15 running. The morning-line favorite to win the Preakness Stakes was no surprise, after Bob Baffert's Medina Spirit took home the Kentucky Derby, but Friday afternoon brought significant change to the Preakness odds board.

With the full field set and the post-position draw finished, here are the current odds to win the Preakness Stakes.

UPDATE 5:15 P.M. ET SATURDAY: About 90 minutes before Preakness post time, parimutuel odds continue to have Midnight Bourbon the 5/2 favorite, Kentucky Derby winner Medina Spirit the 3/1 second choice and Concert Tour the 4/1 third choice. But Ed DeRosa, director of marketing for TwinSpires Racing, thinks a significant odds shift will come shortly, particularly for horses a little further down the odds board that he believes are priced well too short, such as Ram at 12/1.

"I think we're gonna see a big correction after Race 12 at Pimlico," DeRosa said, alluding to the race just prior to the Preakness. And the reason he feels a correction coming is because he believes the reporting of parimutuel betting is lagging well behind. "Think of it as early returns on election night. Votes haven't been turned in yet. I can't believe Ram is 12/1 this late in the game. There's no zest to bet that horse."

Should that correction come, he thinks there will be much more separation between the top three choices and the other seven in the 10-horse field. And he's still baffled by Midnight Bourbon being the chalk.

UPDATE 1:30 P.M. ET SATURDAY: A few hours before the 6:50 p.m. ET post time, William Hill US has Kentucky Derby winner Medina Spirit the 2/1 favorite in its fixed-odds market, with Midnight Bourbon the 3/1 second choice. That's opposite the current parimutuel odds, in which Midnight Bourbon on Friday moved from 5/1 to the 5/2 favorite, while Medina Spirit shifted from the 9/5 chalk to the 3/1 second choice. "We win with every horse except the favorite," William Hill US director of trading Nick Bogdanovich said, noting Medina Spirit is drawing the most tickets and money. "We're a small winner to Midnight Bourbon. He's got the second-most tickets." Concert Tour, the 4/1 third choice, is also taking money. And Bogdanovich pointed to Keepmeinmind as a dark horse today. "The No. 3 horse is getting a bit of attention," he said of the 14/1 co-sixth choice in the 10-horse field.

UPDATE 2:30 P.M. ET FRIDAY: After Tuesday's post-position draw, Kentucky Derby winner Medina Spirit was installed as the 9/5 favorite. There's a boatload of controversy surrounding the horse after a failed drug test post-Derby, but he's running Saturday and will break from the third post. By Friday afternoon, Medina Spirit slid out a to 7/2, then rebouned a touch to 3/1, but is no longer the favorite. That role is now filled by Midnight Bourbon at 5/2. Ed DeRosa, director of marketing for TwinSpires Racing, said that move was fueled in part by betting on the double of who will win today's Black Eyed Susan (5:44 p.m. ET post) and Saturday's Preakness at Pimlico. "The horse surprising me is Midnight Bourbon. He's taking the most money other than the Baffert horses," DeRosa said of the newly installed favorite, who's clearly also drawing plenty of straight-bet action to win the Preakness. Midnight Bourbon is in the fifth gate. Concert Tour, a stablemate of Medina Spirit under trainer Bob Baffert, opened the 5/2 second choice after drawing the 10th post in a 10-horse field, and he's fallen back to the 5/1 third choice today.

Favorite to win the 2021 Preakness Stakes

Medina Spirit, with jockey John Velazquez, won the Kentucky Derby to begin the month, and as a result, was the morning-line betting favorite to win the 2021 Preakness Stakes at 9/5. Concert Tour was the No. 2 choice in parimutuel wagering at 5/2, followed by Midnight Bourbon at 5/1.

However, by Friday afternoon at Pimlico, Midnight Bourbon took over as the 5/2 favorite, where he remains Saturday afternoon. Medina Spirit is the 3/1 second choice and Concert Tour the 9/2 third choice.

Odds of past Preakness Stakes winners

Here are the winners of the Preakness Stakes since 2002, their post positions, and their morning line odds.

Where can I bet on the Preakness Stakes?

This all depends on where you live. If you’re in the USA, betting on the Preakness Stakes online isn’t as simple as simply launching your favorite sportsbook app. Instead, you’ll have to use a specialist-pooled horse racing betting site such as TwinSpires. 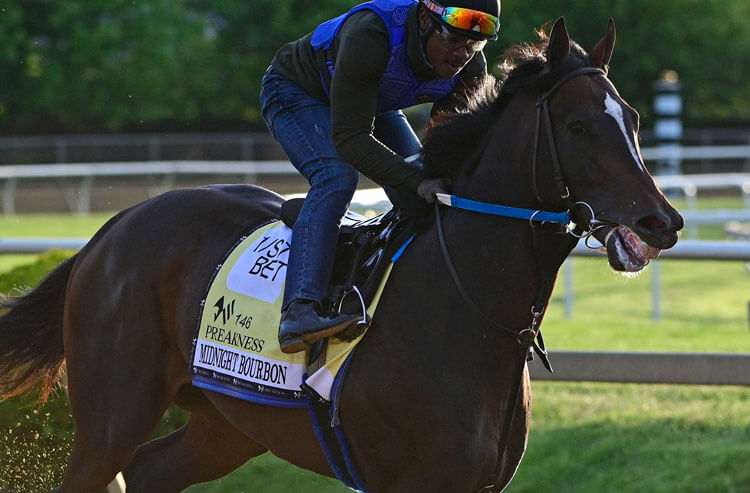 The best bets, prop predictions, and Preakness Stakes odds you didn't know about
Monique Vág | May 17, 2019
/forum/forumbrick/61/10/Popular Horse Racing Discussions
About Us
Contact Us
Careers
Our Team
Brand
Testimonials