Tiger-Cats vs Argonauts Week 15 Picks and Predictions: Ti-Cats Clicking with Masoli at Helm

The Tiger-Cats are in a prime position to knock off the rival Argonauts to square the season series at two games apiece. See why Hamilton's previously anemic offense shouldn't scare you away from taking the Over in our CFL betting picks. 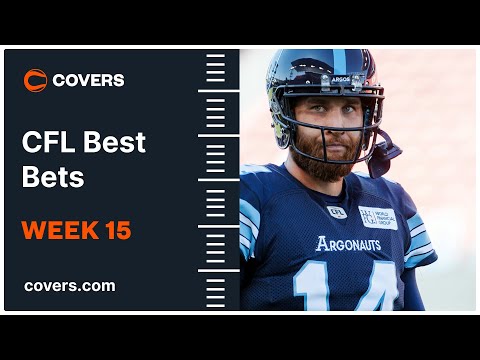 Week 15 in the CFL kicks off on Friday night with a clash of rivals as the Hamilton Tiger-Cats take on the Toronto Argonauts for the fourth time this year.

After the last two battles between these regional foes went right down to the wire, oddsmakers are expecting another close contest with CFL betting lines opening with this game as a pick'em.

Here are our best free Tiger-Cats vs. Argonauts picks and predictions for Friday, November 12, with kickoff at 7:30 p.m. ET.

The Over is 6-1 in the Argonauts' last seven games overall. Find more CFL betting trends for Tiger-Cats vs. Argonauts.

Toronto is atop the East Division standings with an 8-4 record, one game ahead of Hamilton, with just two weeks left in the regular season. The Argos have won five of their last six games but looked sloppy last week when they turned the ball over four times and needed to stage a fourth quarter comeback to beat the lowly Redblacks.

The Ti-Cats have won three in a row and are fresh off a 26-18 home victory over the Lions. These teams have already met up three times this year with the Ti-Cats winning the first clash 32-19 and the Argos winning each of the last two meetings by a single point.

The Argos had the better offense earlier in the year but the Ti-Cats' attack has taken off since quarterback Jeremiah Masoli returned to full strength. Hamilton now has the edge when it comes to both average yards per pass attempt (8.1 to Toronto's 7.6) and rush attempt (5.3 to 4.7).

Toronto traded Nick Arbuckle two weeks ago, putting its faith in MacLeod Bethel-Thompson as its No. 1 QB. He hasn't exactly rewarded that show of confidence, averaging just 6.1 yards per attempt with eight interceptions and two touchdown passes in his last three starts.

If Bethel-Thompson struggled against brutal defenses like BC and Ottawa, he'll have a really tough time against a Hamilton stop-unit that holds foes to just 17.5 points per game. The Ti-Cats allow the second-fewest yards per pass attempt (7.3) and the fewest yards per carry (4.3) in the league.

With the Ti-Cats humming on offense and owning the superior stop unit, back them to win this contest and even up the season series at two games apiece.

Thanks to their dominant defense and struggling offense, the Ti-Cats were a money machine for Under bettors earlier in the year.

That's changed in recent weeks with Masoli back to 100 percent and starting to get in sync with his receivers behind an offensive line that's been blocking much better of late. In the last four games, Masoli has completed 74.5 percent of his passes for 1,519 yards with nine touchdowns and no interceptions, and the Over cashed in three of those contests.

Meanwhile, the Argos are seventh in the league in total defense (surrendering 372 yards per game) and rank sixth in scoring defense (24.4 ppg). With Toronto going 8-2 O/U in its last 10 games and the Over also cashing in eight of the last 10 meetings between these rivals, back it again.

Tiger-Cats vs Argonauts Week 15 Picks and Predictions: Ti-Cats Clicking with Masoli at Helm
Provided by