Francis Ngannou really wants his fight with Tyson Fury, and while the UFC has yet to oblige, sportsbooks are already whetting their whistles with wagers. Get an early look at Fury vs. Ngannou odds for this potential blockbuster exhibition fight.

As Francis Ngannou's contract dispute with the UFC plays out, he seems increasingly bent on a hybrid fight with recently-retired WBC heavyweight champ Tyson Fury.

Ngannou, the current UFC heavyweight belt holder, is taking a stand and trying to leverage this pay-per-view bout into his next deal.

Whether he's successful or not remains to be seen, but that hasn't stopped sportsbooks from listing Fury vs. Ngannou odds for this possible exhibition fight with "The Gypsy King" opening as a massive -1,500 favorite before slimming to -1,000.

Two-time heavyweight champion Tyson Fury is fresh off a dominant sixth-round knockout win over Dillian White on April 23 where he defended his WBC title. Although he soon after announced his retirement from the sport, he seemed to leave the door open for a crossover match against Francis Ngannou by inviting him into the ring and asking him about the size of his "Corey".

Fury is regarded as one of the greatest heavyweight boxers of all time and has notable victories against Derek Chisora (twice), Wladimir Klitschko, and Deontay Wilder (two wins by knockout and draw). The "Gypsy" King is a massive heavyweight who combines strong fundamentals, good movement, laser-like accuracy, and a granite chin.

Francis Ngannou is coming off the first defense of his UFC heavyweight title and has made no secret of his desire for a hybrid bout (and big payday) against Fury. Ngannou is the hardest hitter in MMA and seven of his last eight wins in the UFC have come by way of knockout — with six of those coming inside of the first round.

Ngannou has a background in boxing and originally pursued a professional career in the sport before joining MMA Factory in France. Ngannou’s coach Dewey Cooper recently revealed an outline of the proposed rules with the theoretical showdown taking place in a cage as a boxing match but with 8 oz MMA gloves (larger than the 4-oz ones used in the UFC) and with dirty boxing legal.

While the smaller MMA gloves are likely intended for Ngannou's benefit, Fury comes from a family of bare-knuckle fighters and might be more than comfortable with that adjustment.

Tyson Fury vs Francis Ngannou tale of the tape

If you're signing up for a new sportsbook for some Fury-Ngannou betting, here are two of the best bonuses* available:

The most common way of betting on a boxing match is by picking the overall winner of the bout. With Fury being the favorite for this fight, his odds have the minus sign (-) in front of them at -1,500. This means that bettors would need to wager $1,500 in order to win $100. A Ngannou win would pay out more as he's the underdog at +750. This means that a $100 wager would profit $750. 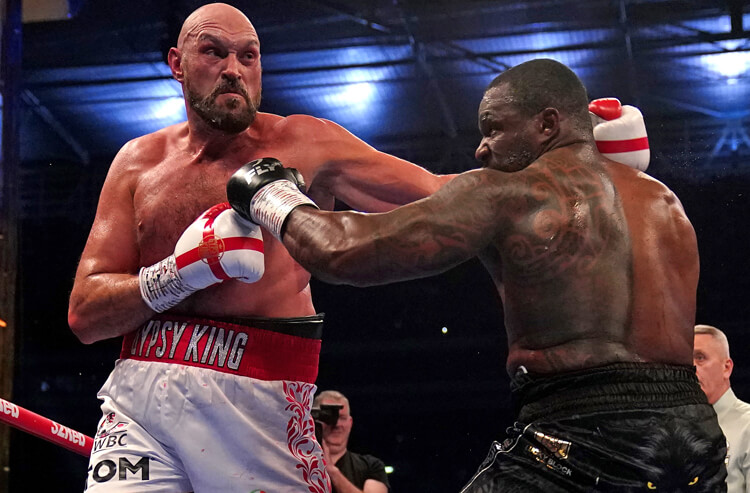 Kubrat Pulev vs Jerry Forrest Picks: Forrest is Better Than his Record Shows
Danny Howard | May 14, 2022

Sergey Kovalev vs Tervel Bulev Picks: The "Krusher" Has the Advantage
Danny Howard | May 14, 2022
About Us
Contact Us
Careers
Our Team
Brand
Testimonials