Mayweather vs. McGregor betting odds breakdown: Why you should bet Mayweather

Floyd Mayweather opened as a -10,000 favorite when this matchup with MMA star McGregor was rumored in May 2016 – a realistic line for such a mismatch in boxing skill. That's not what the odds look like today.

Florida is bracing for what could be the strongest recorded Atlantic storm to hit the state ever. Here’s how professional and collegiate teams are reacting to Hurricane Irma.

The league postponed Sunday’s scheduled game between the Tampa Bay Buccaneers and Miami Dolphins to Week 11 – the week that was scheduled to be both teams’ bye. That means the Bucs and Dolphins will be playing 16 weeks straight.

Miami's first three games will now be at LA against the Chargers, at New York against the Jets and at London against New Orleans. The Fish won’t play their first home game until October 8.

The Hurricanes cancelled their game against Arkansas State and the game will not be rescheduled this season. Miami is scheduled to host FSU in Week 3 of the college season but that game might have to be relocated depending on the severity of the damage caused by Irma.

There are three annual events on the sports calendar in which the mainstream media welcomes sports betting with open arms and opinions: Super Bowl, March Madness and the Kentucky Derby.

There is, however, a fourth occasion that pops up every so often – like the August 21 solar eclipse – that has the 24/7 sports news cycle spitting out odds like a Las Vegas wiseguy: a big prize fight. And by the sounds of it, no fight in history will be bigger than Floyd Mayweather Jr. vs. Conor McGregor.

That statement is a little crazy, considering the most-hyped boxing bout of all time involves only one real boxer. Mayweather is unquestionably one of the greatest to step between the ropes, and is arguably the top defensive boxer the sport has ever seen. **video

The guy is a ghost in the ring, with elite footwork, hand speed and overall boxing smarts mixing together for a potent counter-punching potion that brings Mayweather into this August 26 fight with an unblemished record of 49-0 and has only seen the five-division title holder in trouble a handful of times during his 21-year career.

That’s why Mayweather opened as a -10,000 favorite when this matchup with MMA star McGregor was rumored in May 2016 – a realistic line for such a mismatch in boxing skill. This line has since morphed into a reflection of the sportsbooks’ need to have “public friendly” odds on the biggest fight ever as well as the mainstream support for McGregor – with a heaping of hatred for Mayweather stirred in.

Regardless of the current odds, Mayweather is the overwhelming favorite and deservedly so. That makes giving three reasons why you should bet on Mayweather over McGregor very easy. Almost as easy as this fight should be for Floyd…

As mentioned above, this bout is priced for the public. Priced to sell, if you would. That opening line of Mayweather -10,000 is an unbettable number – asking bettors to wager $10,000 to only win $100. No sports gambler, sharp or square, would get involved in that.

That’s why when the fight was close to official, most sportsbooks either opened or adjusted their Mayweather-McGregor betting odds to Mayweather -1,000 with McGregor coming back as a +700 underdog. And even that was a lot to ask from the casual bettors – wagering $1,000 to win $100 on Mayweather – which explains the one-sided action on McGregor and the massive swing in the fight odds.

Public players and MMA enthusiast have piled on the Irishman, eyeing that underdog payday, betting McGregor with both fists in the months leading up to fight night. Those $10, $20, $50 and $100 bets have slowly accrued into a mountain of liability for sportsbooks, with the random large bet on Mayweather temporarily tempering the line adjustments.

You can now get Mayweather around -550, almost half the price of the opening line. To put those odds into perspective, Mayweather was a -3,500 fave versus Andre Berto in September 2015, a -230 favorite against Manny Pacquiao in May 2015, and around -1,000 in his second bout with Marcos Maidana back in September 2014.

Sure, Mayweather has been out of the gloves for some time since those bouts but he handled those world-class fighters with ease. Now he’s going against a first-time boxer and is discounted like Halloween candy on November 1.

As my colleague, Patrick Everson, wrote when the odds were Mayweather -1,000, “If this was your 401(k) plan or an IRA, you’d be thrilled at a 10 percent return on investment.” Now you’re getting almost 20 percent - minus the $100 bones to watch this bet cash live on pay-per-view.

We’ve already touched on Mayweather’s talents in the ring as well as his undefeated record. But despite those things and probably in good part to Mayweather’s polarizing personality, he still doesn’t get the credit he deserves.

Boxing purists and they’re now few and far between, will gladly rank Mayweather’s work in the ring among the all-time pound-for-pound best fighters. His out-of-ring antics and legal issues definitely tarnish what should be a celebrated sports career.

CompuBox statistics state that Mayweather has landed 43.4 percent of his career punches while limiting foes to just under 19 percent – a +24.5 plus/minus rating. Plus he’s only gotten better with age, taking down world-class competition in the final decade of his career.


McGregor is known as a striker in the UFC, picking up 18 of his 21 professional MMA victories via knockout. That stat line should be taken with a grain of salt, or better yet an entire winter-busting bag of rock salt. McGregor was able to kick, grapple, tackle, elbow, and all but bite his opponents in those bouts – in 4-ounce gloves, no less. On August 26, he can only use his fists which will be covered by eight-ounce gloves. Mayweather won't have to worry about takedowns and rear-naked chokes.

Yes, Mayweather is 40 years old and 11 years the senior of his opponent, and hasn’t been in the ring since September 2015. But he doesn’t have the wear and tear that a boxer his age should have. He’s only suffered one recorded knockdown in his storied career (was more a reaction to breaking his hand on Carlos Hernandez’s face in 2001) and he's absorbed punishment in just a few fights. There is plenty of tread left on those $400 million tires.

Just because Michael Phelps can swim, that doesn’t make him a great water polo player. And just because Conor McGregor can throw a punch, that doesn’t make him a great boxer. For those that love to compare boxing and mixed martial arts, this fight holds a lot more water than it should. We can’t state this enough: these are two very different sports.

Mixed martial arts bouts run three to five 5-minute rounds and for a knockout artist like McGregor, that means even shorter time in the octagon. Only one of his fights has gone a full 5-round distance and all but two of his 24 career clashes have kept the judges out of it. He’s stepping into the deep end now with a fighter who is known for his endurance.

Mayweather has gone a 12-round distance in each of his previous seven fights and a dozen times in his last 14 outings. Depending on how aggressive he wants to be (or how long he wants the PPV to run), Mayweather could drag this one out and lead McGregor into the desert. The longer the fight goes, the better Mayweather’s chances are of walking away 50-0 - one better than legendary pugilist Rocky Marciano.

On top of what could be a marathon for McGregor are the aforementioned gloves. Mixed martial arts usually straps on the 4-ounce variety and there was jockeying for 8-ounce gloves leading up to the fight despite the required size for 154 pounds being 10-ounce gloves, per the Nevada State Athletic Commission. Both men lobbied for the smaller glove and got it. That’s still plenty of extra weight to carry around for the MMA star, who will have a hard time keeping his hands up if this fight gets to the quarter point.

Thinking of betting on Conor McGregor's boxing odds versus Floyd Mayweather? Here's why you should.

The Seminoles moved the kickoff time for their home game against UL Monroe from 7 p.m. to 12 p.m. on Saturday. Florida State is a 34-point favorite and the total is set at 53.

The Gators are following the FSU model by changing their kickoff time from 7:30 to noon as well. Florida hosts Division I-AA college Northern Colorado on Saturday. UF will not stay at its usual game day hotel. Gators coach Jim McElwain told reporters his team will give up the hotel for those who may need it for shelter.

There is no line yet listed for this game.

The Bulls are visiting the UConn Huskies on Saturday but this game has been moved up to a 10:30 a.m. start so that USF players and staff can return home before Irma hits on Sunday.
South Florida is giving 17 points and the total is sitting at 66.5.

The Knights moved their game against Memphis up a full day from Saturday to Friday due to this weekend’s storm. UCF is a 2.5-point home favorite. The total has moved from 64 to 68.5.

The Rays are in Boston this weekend to play the Red Sox but they’re scheduled to begin a three-game home series against the New York Yankees on Monday. TB manager Kevin Cash says he’s told his players to pack as if they’re going on a six-game road trip rather than just a weekend away.

The Marlins begin a six-game road trip on Friday and aren’t scheduled to return home until Thursday next week. The Marlins are encouraging their players to have their families and pets travel with the team on this road trip. 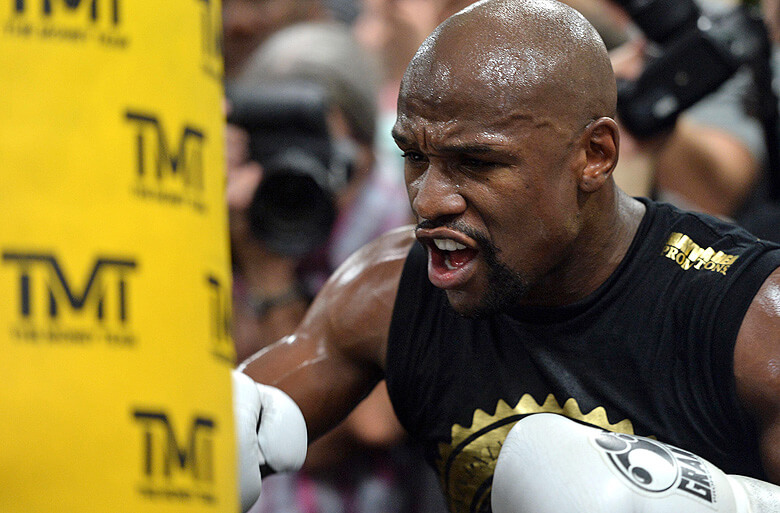 Mayweather vs. McGregor betting odds breakdown: Why you should bet Mayweather
Provided by