Weeks after suffering the second defeat of his career, Canelo Alvarez's next fight was set, as he closes the trilogy against Gennadiy Golovkin. As the fight nears, we've got the Alvarez vs. GGG 3 odds and analysis for you below.

Weeks after suffering just the second loss of his career, Canelo Alvarez was setting up the next steps in his storied arc. The Mexican fighter confirmed the trilogy fight with Gennadiy Golovkin in June, with a rematch against Dmitry Bivol also in the offing.

The third fight between Alvarez and GGG will take place tonight and round out a long-wanted trilogy. The two will fight at 168 pounds after two bouts, the first of which ended in a draw, before Alvarez won the rematch in 2018.

With fight night here, odds have seen movement for Alvarez vs. GGG 3, with the favorite's odds continuing to move. Check out the full odds below and check out our Alvarez vs. GGG picks for more.

Boxing gets another great trilogy with Round 3 of Canelo vs. GGG.

Alvarez is sitting as a -500 favorite for this final fight, despite losing a 12-round decision to Dmitry Bivol in May. That fight, in which Canelo was pegged as a -550 favorite, was supposed to be an easy outing for the WBA light heavyweight champ that would set the table for his third matchup with Golovkin.

However, Canelo was listless in just the second loss of his career, possibly looking past Bivol to this big payday. Even after the loss, Alvarez’s camp skipped over a potential rematch to win his title back and jumped straight to GGG.

Golovkin is coming back as a +360 underdog and after being down to +300 at some sportsbooks. He shook off ring rust in his latest bout in April, beating down a quality foe in Ryota Murata in classic GGG fashion. Despite it being his first fight since December 2020, Golovkin still showed devastating punching power and hand speed with a ninth-round TKO.

Canelo Alvarez vs Gennadiy Golovkin 3 tale of the tape

If you're signing up for a new sportsbook for some Alvarez-Golovkin betting, here are two of the best bonuses* available:

The most common way of betting on a boxing match is by picking the overall winner of the bout. With Fury being the favorite for this fight, his odds have the minus sign (-) in front of them at -1,500. This means that bettors would need to wager $1,500 in order to win $100. A Ngannou win would pay out more as he's the underdog at +750. This means that a $100 wager would profit $750. 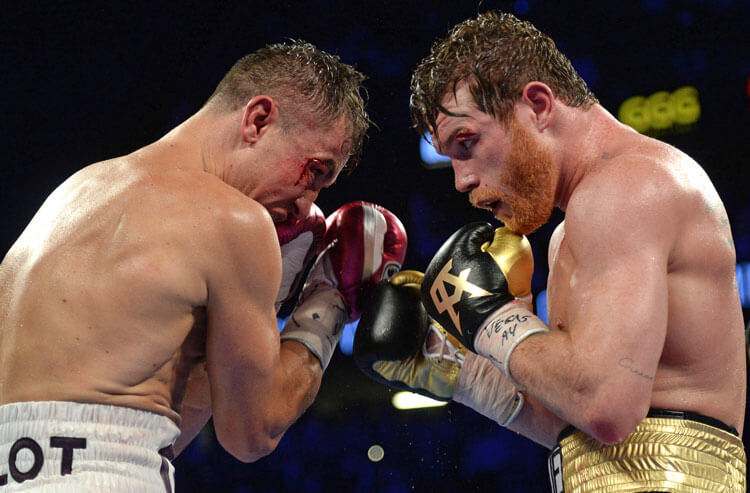