Matty Simo and Toni Law operate the largest proxy service in Las Vegas (FootballContest.com), which allows hundreds of out-of-towners to compete, even if they only get to Vegas a couple times a year.

This time of year brings with it the big heat here in Las Vegas, with temperatures soaring into triple digits every day. But with that heat also comes another wave many people look forward to: the unveiling of the big football contests around town.

Signups for these lucrative events are as much a rite of summer as Fourth of July fireworks and apple pie. The Westgate Las Vegas Superbook’s prestigious SuperContest is the elephant in the room, arguably the most popular and with easily the largest pot, as last season’s winner scored just short of $1 million. But there are some other big-money contests, most notably the Golden Nugget’s Friday Football Showdown and the William Hill US College Pick ‘em Contest.

All provide a roller-coaster of emotions throughout the season, and not just for the contestants. Matty Simo and Toni Law operate the largest proxy service in Las Vegas (FootballContest.com), which allows hundreds of out-of-towners to compete, even if they only get to Vegas a couple times a year. Simo and Law submit their clients’ picks each week for the aforementioned contests, then go along for the ride.

“It’s ridiculous how things happen sometimes,” Simo said, before relaying the story of one of his clients, Chris Kozak, who won last year’s Friday Football Showdown. “I was happier for him than anybody.”

The Golden Nugget contest requires seven picks per week – which can come from NFL or college – for the first eight weeks, then expands to nine picks for Weeks 9 and 10. The top seven contestants over the full 10 weeks, along with a wild-card player with the best point total from Weeks 9 and 10, then go into a playoff-style competition.

“Chris was in the Top 3 most of the first 10 weeks, then he slumped a little bit and got the seventh seed,” Simo recalled, noting Kozak then tied his first-round matchup 4-3 and won it on a tiebreaker. “They also have a best bet, and they have to rank all their picks. They both won their best bet, but Chris’ top three picks all won.”

That got Kozak into the semifinals, where he advanced after again going 4-3 and winning his best bet. So into the final he went, against Michael Wright, a battle of the Nos. 7 and 8 seeds. Kozak once again went 4-3 in his plays, then had to wait it out for Wright’s final plays – his top two picks, both from the same game: Auburn vs. Oklahoma in the Sugar Bowl. Wright was sitting at 3-2 and had Auburn +3 as his best bet, followed by the total going over 63.5 points.

“If Michael would’ve hit Auburn, he would’ve won the whole thing. That was the only way Chris could lose,” Simo said. “I wouldn’t say I was sweating it as much as Chris did, but it was probably the bowl game I cared about the most. I knew how much it meant to him. He’s just missed finishing in the money in the SuperContest a few times. You have to get a little lucky in these contests, but he’s very smart and he went 3-0 on his best bets, which is very important in this contest.”

“We had a guy the previous year who got to the semifinals, who missed the final on a missed field goal,” Simo said, adding it wasn’t just any missed field goal. It was the first miss of the season for the Giants’ Josh Brown, after 25 successful kicks, and gave the Jets a 23-20 overtime victory. Simo’s client needed the total to go over 45. “It was heartbreaking. All the stuff that happens in a game, and then you expect it to get to 23-23. He probably lost $40,000 on that play. That’s the kind of ups and downs you have.”

Last season’s SuperContest saw one of Simo’s clients cash out well, at around $116,000 for a third-place finish. And it wasn’t a cagey veteran of the esteemed contest, which requires five NFL plays per week for the 17-week regular season.

“He was a first-timer, having a blast the whole time. He didn’t really think about the money,” Simo said of a contestant who went by the name of Golden Goose. “He was tied for fourth going into the last week, and he said before, regardless of whether he finished in the money, he’d be back.”

Simo pointed out that 0-5 weeks can certainly happen in the SuperContest, and such a week could have killed the Golden Goose, perhaps taking him out of the top 50, the cutoff point to get paid. He safely went 3-2 and ended up tied for third, though a 4-1 record and at least a tie for second – which could have netted another $100,000 or so – was within his grasp.

“He had the Falcons -6.5 against the Saints. It was 38-13 going into the fourth quarter,” Simo said. “Then the Saints went nuts at the end of the game, outscoring Atlanta 19-0 in the fourth, and the Falcons won by 6. But he was just thrilled at coming in third. I think I was more stressed about that game than he was.”

The SuperContest has a registration fee of $1,500, with signup opening on July 1, and there’s a very good chance this year that there will be enough contestants to generate the first ever $1 million first-place payout. In conjunction with the contest, the Superbook is unveiling SuperContest Gold, at $5,000 per entrant in a winner-take-all format.

Registration for William Hill’s Pick ‘em contest also opened July 1, at $500. Friday Football Showdown registration is expected to be in late July, with a $2,000 fee.

Of course, those entry fees don’t include the proxy cost: $300 for the SuperContest. $200 for Golden Nugget and $100 for William Hill. But for a season’s worth of entertainment and a chance to win some serious cash, there’s no shortage of people lining up for Simo and Law’s service. FootballContest.com had more than 700 clients in last year’s SuperContest – about 40 percent of the field – along with plenty of customers for the Golden Nugget and William Hill contests.

“We like being kind of a one-stop shop for Vegas football contests,” Simo said, noting he offers discounts throughout the year, including a referral program, and has a SuperContest premium service ($350) with other incentives. “We’re always trying to stay ahead of the game, coming up with new ways to help clients out.” 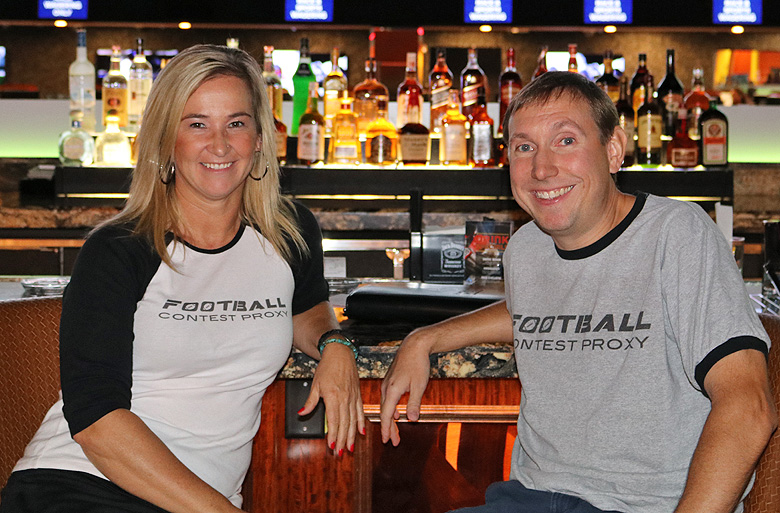