Cory "The Sandman" Sandhagen is a rising star in the bantamweight division but he'll get a tough test as former champion T.J. Dillashaw makes his return to the UFC. Can Sandhagen continue to ascend? Check out our UFC picks and predictions.

Cory Sandhagen vs. TJ Dillashaw is the main event for UFC Fight Night betting on Saturday, July 24 at the UFC Apex in Las Vegas.

This should be a terrific bout between a surging bantamweight contender in Sandhagen and a former champ looking to climb back to the top in Dillashaw.

UFC betting lines have Sandhagen installed as a -188 favorite while Dillashaw comes back at +152. Here are our best Sandhagen vs. Dillashaw picks and predictions for UFC Fight Night action on July 24.

Cory "The Sandman" Sandhagen is No. 2 in the bantamweight rankings and is coming off back-to-back knockout wins over Frankie Edgar and Marlon Moraes. Sandhagen is 7-1 in his UFC career with his only loss coming by submission to current 135-pound champ Aljamain Sterling

The Sandman is a long and athletic fighter that combines terrific striking with dangerous ground and pound. The 29-year-old is a high-volume striker that lands 6.85 significant strikes per minute while absorbing 3.89.

T.J. Dillashaw is a former two-time UFC bantamweight champion but was forced to give up his belt and accept a two-year suspension after testing positive for a performance-enhancing substance in his last fight — a knockout loss to Henry Cejudo in a flyweight title bout in January of 2019.

Dillashaw is 8-2 in his last 10 trips to the octagon with his only defeats coming against legends like Cejudo and Dominick Cruz, and victories over big-name opponents like Cody Garbrandt (twice), Raphael Assunção, and Renan Barão (also twice).

Dillashaw is a well-rounded fighter that is comfortable on the mat but prefers to use his excellent footwork and stance switches to open up striking angles and land combinations.

Sandhagen vs Dillashaw tale of the tape

PREDICTION: Moneyline Cory Sandhagen (-188) - Dillashaw was not so long ago one of the best pound-for-pound fighters on the planet but things can change in a hurry in the MMA game and inactivity always hurts. Not to mention that there's no way of really knowing how effective he will be without the use of PEDs, especially at the age of 35.

Sandhagen is smack-dab in the middle of his prime and looked terrific in his last two fights. His speed, length, and kick-boxing should be enough to give him the edge against the older fighter.

PREDICTION: Sandhagen to win by KO/TKO (+160) - The last time Dillashaw entered the Octagon he was knocked out in 30 seconds by Cejudo. While we don't want to put too much emphasis on that fight since he was sapped by a very tough weight cut to 125 pounds, he was also knocked down by Garbrandt in their first matchup and can be a bit hittable at times.

The Sandman has earned his nickname for good reason and it's not just because of his last name. He can put people to sleep as his highlight-reel knockouts against Edgar and Moraes proved. With six of Sandhagen's last nine wins coming by way of KO/TKO we're backing that method to win prop on Saturday.

PREDICTION: Fight to start Round 4 No (+100) - We mentioned Sandhagen's finishing ability but Dillashaw also has terrific power for this weight class. You don't knock out Garbrandt and Barao twice without being extremely dangerous with your hands.

Both of these fighters are very active and aggressive with their striking which should mean this fight doesn't make it past the first three rounds. 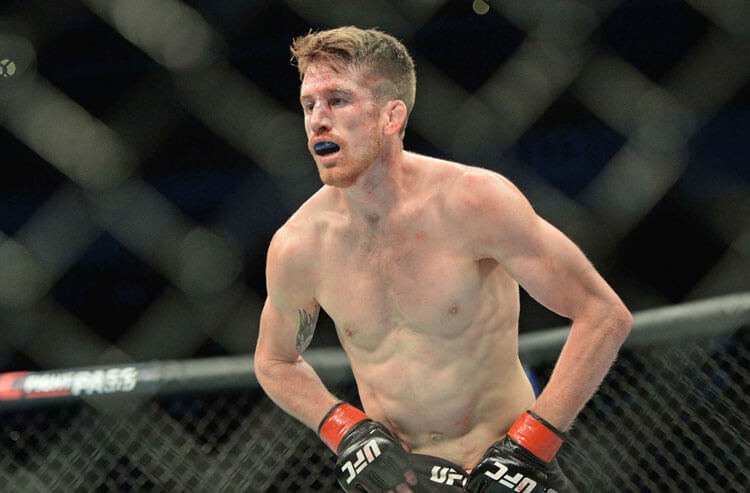