Both Uriah Hall and Sean Strickland come into the main event of UFC Fight Night on four-match winning streaks, but we like the powerful counter-striker in Hall — who is the underdog for the fight — to come away with the win.

Both of these ranked middleweights enter on winning streaks and Strickland will look for the biggest win of his career against an established veteran in Hall. UFC betting lines opened with Strickland as a -215 favorite while Hall comes back at +172.

Here are our best free Strickland vs. Hall picks and predictions for UFC Fight Night action on July 31 from the UFC Apex in Las Vegas.

Uriah "Prime Time" Hall is the No. 8-ranked middleweight contender and is 4-0 in his last four fights. In his last appearance in the Octagon in April, he beat Chris Weidman via TKO after he checked an early leg kick from Weidman and broke his lower leg.

The 37-year-old is a highly polished and accurate striker and has explosive power with both his punches and kicks, but he can be a bit tentative at times.

Sean "Tarzan" Strickland is No. 11 in the middleweight rankings and has also won four fights in a row, with his most recent victory coming against Krzysztof Jotko in May. Tarzan suffered a brutal motorcycle accident in 2018 but returned to the octagon after two years of rehab with a unanimous decision win over Jack Marshman last October.

The 30-year-old began his MMA career at the tender age of 17 in King of the Cage and eventually became the middleweight champ in that promotion. Strickland successfully defended that title five times before he entered the UFC in 2014 and has compiled a 10-3 record in the octagon. He is a high-volume striker with crisp boxing.

Hall vs Strickland tale of the tape

PREDICTION: Moneyline Uriah Hall (+172) - Strickland is the better wrestler but with Hall's strong takedown defense, and Strickland's preference for striking, this will likely be a predominantly standup affair.

Strickland's path to victory will be to rely on his volume to outpoint Hall over five rounds, but he tends to have a straightforward style with little head movement and he can be a bit hittable at times.

That could spell trouble against a powerful counter-striker in Hall, who has a 3.5-inch reach advantage and likes to bait his opponents with feints. With this main event scheduled for five rounds, I think Hall eventually gets to Strickland with power shots and takes the W.

PREDICTION: Hall by KO/TKO - Strickland has only been finished once in his career but that was his previous loss, in 2018 against Elizeu Zaleski dos Santos. He hasn't faced many opponents with Hall's explosive power and seven of Prime Time's last eight wins have come by way of KO/TKO.

PREDICTION: Under 3.5 Rounds (-110) - We’re expecting a striking battle in this one and with Strickland’s willingness to take a punch in order to give one — and Hall’s finishing ability — we don’t see this fight lasting until the championship rounds.

Three of Strickland’s last five fights ended within the first two rounds, while seven of Hall’s previous eight bouts ended by stoppage within the first 17 minutes. We’re expecting this fight to be over before the 2:30 mark of Round 4 and taking the Under 3.5. 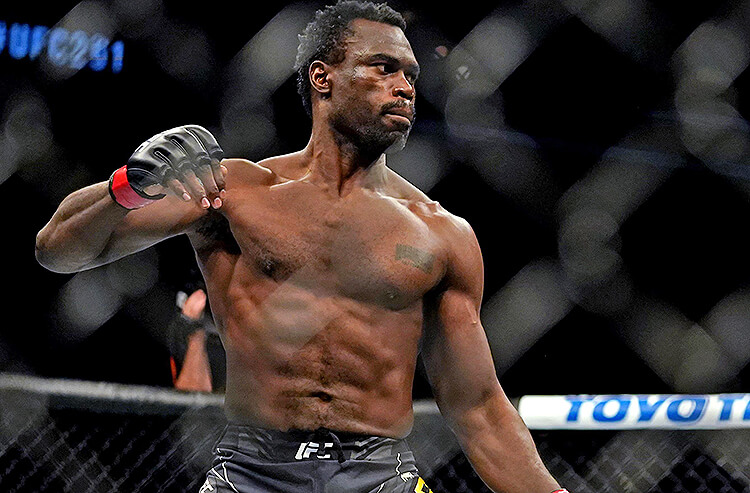